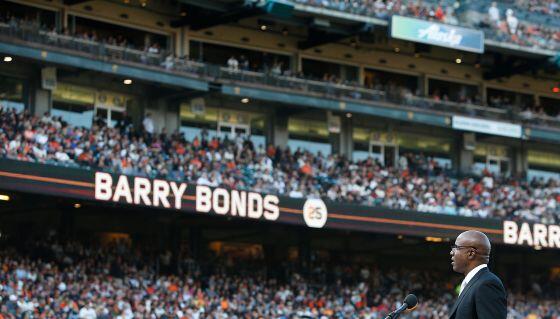 T uesday’s decision against voting Barry Bonds into the Baseball Hall of Fame was not only a snub to one of the greatest baseball players of all time who holds several home run records, but it also ignored repeated pleas from baseball legend Willie Mays , whose word carries an outsized amount of clout in baseball.

In fact, Tuesday was the final chance for Bonds to be voted into the Hall of Fame, meaning his name will forever be left out of the annals of the sport despite his record achievements, albeit under controversial circumstances. Bonds’ eligibility for being voted into the Baseball Hall of Fame expired on Tuesday.

Throughout it all, Mays has been one of Bonds’ biggest supporters and has said the slugger was still among the sports’ greatest players regardless of the role performance-enhancing drugs played.

Back in 2018 when Bonds was having his number retired by the San Francisco Giants during a ceremony at AT&T Park, Mays spoke in no uncertain terms about his desire to see Bonds inducted into the Baseball Hall of Fame.

That was when Mays, who was 87 at the time, insisted on leaving his seat and standing at the podium to deliver his message to the Baseball Writers’ Association of America, which votes every year on new inductees.

“On behalf of all the people in San Francisco and all over the country, vote this guy in! It’s very, very important to me,” Mays said at the time , endorsing his godson for enshrinement among baseball’s greatest players.

Mays, who played 21 seasons for the Giants franchise and belted 660 home runs for the team, spoke at the ceremony to retire Bonds’ jersey number 25.

Bonds remains Major League Baseball’s all-time slugger with 762 home runs. The 57-year-old baseball legend was the National League’s most valuable player seven times and a 14-time all-star selection. Yet, he will never be named among the greatest players of his sport.

Bonds has a huge blemish on his 22 years in the major leagues that’s preventing him from baseball immortality: Steroids. He admitted to using human growth hormones during his career, but he denied knowledge of using them, blaming his personal trainer for misleading him.

The former slugger had four more chances to gain election into the Hall of Fame since his jersey was retired that day in 2018. His vote total has increased each year since his second appearance on the ballot. However, with 61.8 % of the votes on the 2022 ballot, Bonds was not close to the 75 percent needed.

If You Can’t See The Braves’ Tomahawk Chop Is Racist, Chances Are You’re Drowning In White Privilege

According to USA Today's Bob Nightengale, the Seattle Mariners have agreed to a one-year major league deal with veteran outfielder Justin Upton. The Los Angeles Angels of Anaheim released Upton on April 8. In the final year of a five-year $106 million contract, the Mariners will pay $550K of Upton's...
SEATTLE, WA・50 MINUTES AGO