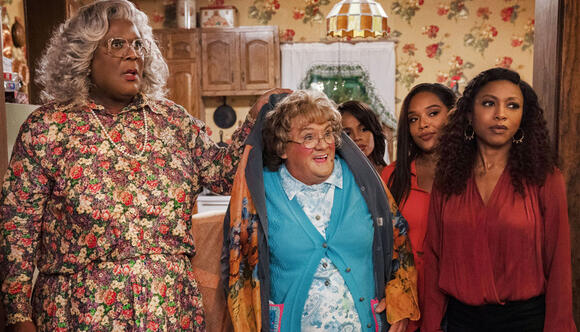 America’s favorite grandmother is back and badder than ever, “braless and lawless.” Netflix dropped the trailer Wednesday for Tyler Perry ’s “A Madea Homecoming,” the 12th installment in the iconic franchise.

“Black don’t crack… unless you’re using it,” Madea says in the trailer for the film, which will center around her great-grandson’s college graduation, where hidden secrets and family drama threaten to ruin the celebratory reunion. The movie streams on Feb. 25.

Perry —  who has been playing Madea since 1999, when he first debuted the character in his play, “I Can Do Bad All by Myself” — was planning to retire his gray wig after 2019’s “A Madea Family Funeral” and his 2020 live “Farewell Play Tour,” but changed his mind after the pandemic hit.

He told Variety in 2020, “I was done with Madea, completely done with it … But as I’ve been looking at the state of the world — and I finished a tour in January, just before the pandemic started to break in the country — and the amount of joy and laughter that it brought to so many people, that’s what I think is missing. We need that laughter and that joy.”

The film is the first Madea installment to premiere on Netflix. Since 2005, the franchise has grossed more than $670 million at the box office, according to Forbes. But the collaboration is not Perry’s first with the streaming service — “A Madea Homecoming” follows his 2020 film, “A Fall From Grace,” which reached 39 million households on Netflix in its first month, and will be joined by his upcoming project, “A Jazzman’s Blues.”

“A Madea Homecoming” was shot last summer entirely at Tyler Perry Studios in Atlanta, Ga., with a budget of more than $20 million. Perry has gotten creative with promotion for the film, creating spoofs of posters for other Netflix projects, including “The Crown,” which he dubbed “The Frown,” and, of course, Beyoncé’s “Homecoming,” which Perry rewrote to say “Homegoing,” captioning the post: “I want to thank my incredible Moth-hive.”

Check out the trailer below.

‘Bridgerton’ Star Charithra Chandran on How Colorism Made Her Avoid the Sun for Years: ‘It’s a Daily Struggle’

Click here to read the full article. “Bridgerton” star Charithra Chandran is sitting at Netflix’s FYSEE experience at Raleigh Studios in Los Angeles with her fellow Indian co-star Simone Ashley, where they talked about their instantly beloved roles as sisters in the second season of the hit Netflix series. “Bridgerton” has been praised for its diverse cast, but the applause amplified even more when Chandran and Ashley joined Season 2 because they have darker skin than the Indian actors who are traditionally cast in Hollywood for significant roles. “Coming to L.A., it was a profound moment because I spent my life avoiding...
LOS ANGELES, CA・2 DAYS AGO
Variety

Click here to read the full article. “Westworld’s” Fares Fares is set to make his directorial debut with a Swedish film titled “A Day and a Half” for Netflix. Fares will also star in the feature alongside Alexej Manvelov (“Chernobyl”) and Alma Pöysti (“Tove”). It is scheduled to hit Netflix in 2023. Inspired by a true story, “A Day and a Half” tells the tale of Artan (played by Manvelov), a man who takes his ex-wife Louise (Pöysti) hostage on a perilous road trip through Sweden with the police in tow. Police officer Lukas (played by Fares) is also along for...
TV & VIDEOS・19 HOURS AGO
Variety

Click here to read the full article. “This Is Us” said goodbye to Mandy Moore’s Rebecca Pearson Tuesday — and so did many, many NBC viewers. The second-to-last episode of the Dan Fogelman-created family drama drew a 0.95 rating in the advertiser-coveted adults 18-49 demographic and 5.3 million viewers, according to Live + Same Day ratings from Nielsen. That is the second-highest rated and second-most watched episode of the sixth and final season of “This Is Us.” The top episode in both categories was the Jan. 4 Season 6 premiere, which got a 1.05 and 5.5 million viewers. The 9 p.m. “This...
TV SERIES・2 DAYS AGO
Popculture

Click here to read the full article. The NBC drama pilot “Found” has cast Kelli Williams, Variety has learned exclusively. Williams joins previously announced series lead Shanola Hampton in the project along with fellow cast member Mark-Paul Gosselaar. The show is built around the fact that, in any given year, more than 600,000 people are reported missing in the U.S. More than half that number are people of color that the country seems to forget about. Public relations specialist Gabi Mosley (Hampton) — who was once herself one of those forgotten ones — and her crisis management team now make sure there...
TV SERIES・2 DAYS AGO
Hello Magazine

Robin Roberts got emotional as she opened up about her relationship with partner Amber Laign, especially in the midst of a challenging health battle. The Good Morning America star made an appearance on The Ellen DeGeneres Show to promote her new book, Brighter By the Day. VIDEO: Robin Roberts enjoys...
CELEBRITIES・25 DAYS AGO
The Independent

Laughter erupted in courtroom after Johnny Depp said he doesn’t watch his own movies and couldn’t recall the question he was asked. “I don’t watch them. I feel better not watching them. What was the question again?” Mr Depp said to laughter from the room. Johnny Depp trial – latest updates“Order in the court, or I will have you removed,” Judge Azcarate said. “Understood? Thank you.”The defamation trial between Mr Depp and Amber Heard began on Monday 11 April in Fairfax, Virginia following Mr Depp’s lawsuit against his ex-wife in March 2019. Mr Depp is arguing that she defamed him...
CELEBRITIES・25 DAYS AGO
Hello Magazine

The Today Show stars, including Hoda Kotb, Savannah Guthrie, and Craig Melvin, are reeling from the death of a beloved fellow Today host, one whose hiring onto the show made history at NBC studios. The co-hosts took a moment out of Monday morning's show to honor the legacy of Jim...
CELEBRITIES・25 DAYS AGO

Johnny Depp found humour in a question asked during a Disney executive’s testimony in the ongoing defamation trial brought against ex-wife Amber Heard. In a pre-recorded deposition presented to the court on Thursday (19 May), Tina Newman – who works on the Pirates of the Caribbean franchise – was questioned about Depp’s future in a potential sixth film. “Do you know whether Mr Depp is being considered for a role in Pirates 6?” Heard’s lawyer inquired. To which Newman responded “I don’t know one way or another,” adding that the “decision does not fall within my job responsibilities. It’s...
MOVIES・1 DAY AGO
The US Sun

GENERAL Hospital revealed a major character change is coming to the show this week as one of its stars battles health issues. There are often comings and goings happenings on soaps, and the latest cast switch-up involves longtime cast member Nancy Lee Grahn. Nancy, who turns 66 on Thursday, has...
CELEBRITIES・25 DAYS AGO
Insider

Ryan Seacrest is weighing in on the ongoing court battle between the Kardashian-Jenner family and Blac Chyna.According to a new report from Radar, the TV producer made some bombshell claims in his deposition, which the famous family is trying to get blocked from the jury. As reported by the outlet, Seacrest — who is scheduled to take the stand in the trial — shockingly revealed in his deposition that he wanted Chyna's show with Rob Kardashian, Rob & Chyna, to move forward, despite the Kardashian-Jenner squad's claim that there was fear over Rob's safety as a result of the exes'...
CELEBRITIES・24 DAYS AGO

Comedian Kevin Hart will launch new media company HARTBEAT with a $100 million investment from private equity firm Abry Partners.  The new venture, unveiled Tuesday, is a combination of his two production companies, Laugh Out Loud and HartBeat Productions. Hart plans to use the investment to hire more employees, grow the existing brands within the new enterprise and develop new content.More from The Hollywood ReporterNetflix Acquires Kevin Hart, Woody Harrelson's Sony Pic 'The Man From Toronto'Just For Laughs Unveils Plans for In-Person Comedy FestivalGaming Company Backbone Reveals Series A Funding Backed by Ashton Kutcher, The Weeknd, Kevin Hart and More “The creation...
CELEBRITIES・24 DAYS AGO
Us Weekly

Putting it all out there. Viola Davis doesn’t have time for critics — especially when it comes to her portrayal of Michelle Obama on Showtime’s The First Lady. The 56-year-old actress told BBC News in an interview published on Monday, April 25, that it is "incredibly hurtful when people say negative things about your work." […]
CELEBRITIES・24 DAYS AGO
Variety

Click here to read the full article. Faith Hill will never forget one of her earliest auditions. She read for director Anthony Minghella for 2003’s “Cold Mountain” for the role that went to Natalie Portman. “I read, I believe, the rape scene and another one. It was intense,” Hill tells me on the new episode of the “Just for Variety” podcast. “I had been on a few readings, but nothing like that.” Not that she didn’t do her homework beforehand. “I worked my tail off to be prepared for that,” Hill said. “Because for me, personally, I thought I have got to prove...
CELEBRITIES・2 DAYS AGO
Outsider.com

She’s definitely embracing the Hawaii lifestyle, and now “NCIS: Hawai’i” star Vanessa Lachey is showing off her everyday surrounding to her Instagram followers. “Hawai’i = Home,” Vanessa Lachey declares in her latest social media post. The “NCIS: Hawai’i” star also shares a snapshot of her sitting in a breathtaking area in Hawaii.
HAWAII STATE・24 DAYS AGO
HipHopDX.com

Too $hort has worked with a score of legendary producers throughout his almost 40-year career, from Jermaine Dupri and Lil Jon to Daz Dillinger and DJ Pooh. But one big-name beatsmith he passed up the opportunity to work with was Kanye West. During a recent interview with VladTV, the Bay...
CELEBRITIES・24 DAYS AGO
TheStreet

Once again, Disney (DIS) - Get Walt Disney Company Report is finding itself embroiled in a political quagmire owing to its support of the LGBTQ community, after Florida Gov. Ron DeSantis punished Disney for denouncing his “Don’t Say Gay Bill,” by seeking to revoke Disney World’s designation as a special tax district (which as we pointed out, is ultimately a meaningless gesture).
FLORIDA STATE・24 DAYS AGO
Popculture

Spring is always a big time for engagements and weddings, and two beloved internet personalities are the latest to update their relationship status. On April 18, Rachel "Seltzer" Quirico revealed she and longtime boyfriend Trevor "TorcH" Housten were tying the knot after 17 years together. Both of them are beloved figures in the esports world, with Seltzer notably starring in the Syfy reality show WCG Ultimate Gamer. She's also hosted numerous esports tournaments and events for TV/streaming outlets; she also made a recent appearance on G4 TV's Boosted.
RELATIONSHIP ADVICE・25 DAYS AGO
Variety

Click here to read the full article. The “Yellowstone” spinoff series “6666” is joining the mothership show on Paramount Network. It was previously reported that the new show would air exclusively on Paramount+. It will now run on the linear network first before episodes are made available to stream on demand. A premiere date has not been set. “6666” was originally announced in February 2021 as one of several new shows on the development slate of “Yellowstone” co-creator Taylor Sheridan. The show takes place at the real 6666 ranch in Texas. It was featured in Season 4 of “Yellowstone,” with Jimmy (Jefferson...
TV SERIES・2 DAYS AGO