1 body found; search goes on for 38 others on capsized boat off Florida coast 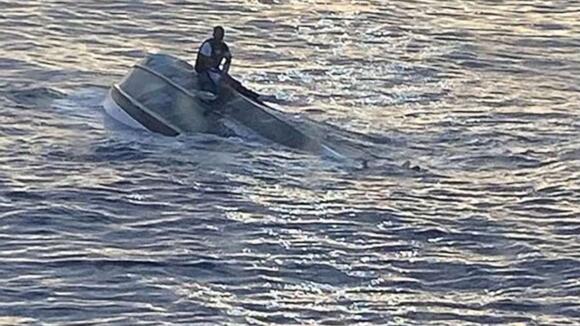 One body has been recovered as a search continued Wednesday morning for 38 other passengers believed to have been on a human-smuggling boat that capsized in the northern Straits of Florida, officials said.

During a news conference Wednesday morning, a U.S. Coast Guard official said search and rescue crews are in a race against time to find any survivors.

"It is dire. The longer they remain in the water without food, without water, exposed to the marine environment, the sun, the sea conditions, every moment that passes it becomes much more dire and unlikely that anyone could survive in those conditions," said Capt. Jo-Ann Burdian, commander of the Sector Miami Coast Guard.

The 25-foot capsized boat was discovered around 8 a.m. on Tuesday roughly 40 miles east of Florida's Fort Pierce Inlet when a commercial tug-in barge operator radioed in that one survivor was found clinging to the hull of the overturned vessel.

"We often rely on sometimes heroic acts of good Samaritans operating in the marine environment and this case is no exception," Burdian said. "We’re deeply grateful that the mariner located the survivor in this case and saved his life and called us so that we could continue to search for survivors."

Burdian said the survivor was in a hospital in stable condition on Wednesday and was being interviewed by federal Homeland Security investigators. The survivor said a total of 40 people were aboard the boat when it flipped over in treacherous sea conditions after launching from Bimini Island in the Bahamas on Saturday evening, Burdian said.

Joshua Nelson, operations manager for the tug-in barge dubbed the "Signet Intruder" that rescued the man, said the survivor told the crew that his sister was on the boat and among those unaccounted for. Nelson, who was not on the barge owned by Signet Maritime Corp. when the rescue was made, told ABC News that his crew reported that the man was dehydrated and "was very malnourished and very distraught."

"We’ve had other vessels and other crew members in some of our other divisions that have encountered this before," Nelson said. "Nothing really prepares (you) in regards to this, but they felt relieved that they were able to get him on board."

"We did recover a deceased body, who will be transferred to shore today in Fort Pierce and we continue to search for other survivors," Burdian said.

She said crews have already searched an area of about 7,500 nautical miles or about the size of New Jersey.

Burdian said aircraft crews have reported seeing some debris fields with items consistent with the number of people believed to have been on board the vessel.

MORE: Florida boater rescued 86 miles off coast: 'I thought, this is it'

"We do suspect that this is a case of human smuggling," Burdian said. "This event occurred in a normal route for human smuggling from the Bahamas into the southeast U.S."

She said the waters in the Florida straits can be quite treacherous.

"In cases like this, small vessels, overloaded, inexperienced operators at night in bad weather is incredibly dangerous," Burdian said.

MORE: 'It was nothing short of a miracle': Charter boat captain recounts rescue of man stranded 36 hours at sea

Burdian would not comment on the origins or nationalities of the people believed to have been on the vessel.

"My focus remains on search and rescue," Burdian said.

She said the search will continue throughout Wednesday, but cautioned, "the search can't go on forever" and that the rescue operation will be re-evaluated on a daily basis.

"Without life jackets, anyone is disadvantaged to survive in the water," Burdian said. "Life jackets save lives."

Sadly, most of these people on the ship that sank likely died from shark attacks. That area of the ocean is loaded with great white sharks

Perfect , sink all boats with illegals , put illegals caught at border on boats and sink them off shore 100 miles out

Police in Alabama say a South Carolina truck driver has confessed to killing a woman who disappeared 21 years ago and to hiding her body in a suitcase. Police in Bessemer, Alabama told news outlets that South Carolina native Brian Jones traveled back to Alabama last month and admitted to killing 41-year-old Janet Luxford in 2001. He then led investigators to a green suitcase with bones inside, police said.
BESSEMER, AL・29 DAYS AGO
Bridget Mulroy

Earthquakes are putting the states to the test.(Chandler Cruttenden/Unsplash) A series of earthquakes have hit Texas, California, Utah, Nevada, New Mexico, Puerto Rico, Hawai’i, and Alaska. The United States took a small hit today compared to the rest of the world – all within a single day.
3 DAYS AGO
Fox News

A sheriff in Florida arrested his own daughter on drug charges as his department continues its war on addictive substances. Franklin County Sheriff A.J. Smith gave a statement on April 19 confirming that his daughter, Kristen Kent, had been arrested under suspicion of meth trafficking two days prior. "Methamphetamine does...
FLORIDA STATE・29 DAYS AGO

Bodycam footage captured the snake slithering around the room as an officer attempted to capture it.
BOYNTON BEACH, FL・28 DAYS AGO
country1037fm.com

I live on a 109-acre horse farm in York County, South Carolina. I do not own but a few of those acres, don’t get me wrong, but the surrounding property is quite large and owned by a friend of mine so I have access to the whole thing. Over the years I have lived there I have really grown fond of privacy.
YORK COUNTY, SC・29 DAYS AGO
CBS News

A 60-year-old man who has been charged in the January 6 insurrection at the Capitol has been identified as the son of a fames American artist. Vincent Gillespie, who has been in a legal battle against his stepmother to gain control of paintings by his father, Gregory Gillespie, was arrested in February on charges relating to the Capitol riot.
ATHOL, MA・28 DAYS AGO
Newsweek

Troy Staggs found himself in a 47-minute long battle with the huge fish, which measured 4.6 feet and weighed around 55 pounds.
MISSOURI STATE・29 DAYS AGO

Paul Williams fought for his life against a large black bear on the afternoon of April 21 outside of his home in Beaubassin East, a rural Canadian community in southern New Brunswick. “She got me in the face, she got me on my arm,” he said, of his wounds estimated...
NEW BRUNSWICK, NJ・28 DAYS AGO
InsideHook

Arrival of Jumping Worms Suggests California Might Be Experiencing the Apocalypse

In the last few years, California has experienced wildfires, mudslides, earthquakes and droughts. It’s the kind of situation that seems increasingly apocalyptic, with dystopian science fiction reading like travelogues rather than cautionary tales. But to date, the people of California have been spared at least one nightmarish scenario: the presence of earthworms that can jump a foot in the air.
CALIFORNIA STATE・2 DAYS AGO
NBC News

A Florida woman has been arrested after allegedly making a bomb threat to her son’s high school, enraged that her son wasn't being fed enough at the cafeteria. Anaya Metoya Smith, 41, was arrested Wednesday in connection with a threatening voicemail she left at Cocoa High School on Feb. 3 around 5:30 p.m., saying she’d "blow ... up" the school, according to the probable cause affidavit. The city of Cocoa is about 45 miles east of Orlando.
ORLANDO, FL・29 DAYS AGO
MilitaryTimes

A junior soldier assigned to 7th Infantry Division at Joint Base Lewis-McChord, Washington, died Monday and two more were injured in a single-vehicle accident during a training exercise, a division spokesperson said. Pfc. Joseph A. Marquez, from Dover, Delaware, was killed in the Yakima Training Area mishap, according a release...
DOVER, DE・28 DAYS AGO

An investigation said the sub's leaders "missed a significant opportunity for self-reflection and improvement" after the earlier incident.
CONNECTICUT STATE・19 HOURS AGO
ABC News

At least 18 children and two adults are dead after a shooting at Robb Elementary School in Uvalde, Texas, on Tuesday, according to the Texas Department of Public Safety. The 18-year-old suspect, a student at Uvalde High School, is also dead, Gov. Greg Abbott said. Abbott said the suspect "shot...
TEXAS STATE・21 HOURS AGO
The Guardian