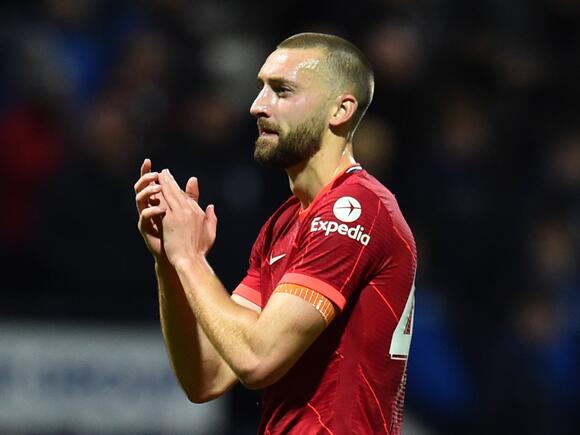 Liverpool defender Nat Phillips is interesting two Premier League clubs and could leave before the end of the January transfer window.

The club have already turned down a loan with an obligation to buy offer from Newcastle for the 23-year-old centre-back, having previously rejected a £7million bid from Watford.

West Ham have also been linked with a move for the defender for some time.

Phillips has featured on only three occasions this season – including a Champions League start against AC Milan at San Siro – due to the return to fitness of Virgil Van Dijk, Joel Matip and Joe Gomez and the summer arrival of Ibrahima Konate.

However, he played an integral part in the club’s late run to third place last season when injuries left Liverpool without their three senior central defenders.

The club will not sell Phillips on the cheap but, with the players in front of him and the interest being expressed, it is understood it is increasingly likely he will move before Monday’s deadline.

Fellow centre-back Rhys Williams, who last week was recalled from a loan spell at Swansea due to a lack of game time, is wanted on loan by Sheffield United but fellow Sky Bet Championship side Reading are also believed to be interested.

Liverpool are looking for certain assurances over playing time after the 20-year-old’s Swans experience, however, his immediate future is linked to Phillips.

Williams was initially recalled on the assumption the more senior centre-back would be leaving, so if that does happen the club will assess whether the youngster will be allowed to go back out on loan.

Liverpool are hopeful they can secure a loan with an obligation to buy deal for the right-back, who has made eight appearances this season, two of which were Champions League starts against Porto and AC Milan.

Midfielder Leighton Clarkson, another youngster recalled early from a spell at Blackburn, will not be going out on loan again in January.

Erik Ten Hag does not believe joining Manchester United at this low ebb is a risk, with the newly-appointed manager hopeful of breaking the Manchester City and Liverpool duopoly.Sunday’s 1-0 loss at Crystal Palace was a fitting end to a wretched campaign in which the Red Devils recorded their lowest ever Premier League points tally.Ten Hag was at Selhurst Park for United’s meek season finale and officially began work the following day, when the former Ajax boss stepped through the doors of Old Trafford for the first time.The 52-year-old said “it feels like my home already” as he outlined his...
PREMIER LEAGUE・1 HOUR AGO
The Independent

Erik Ten Hag has spoken of his excitement after taking charge at Manchester United, who he sees as having “huge potential”.The Dutchman on Monday conducted his first press conference since being named as Ole Gunnar Solskjaer’s permanent successor last month.The former Ajax boss comes in after United, with Ralf Rangnick in interim charge, finished sixth in the Premier League table.Ten Hag opened the press conference at Old Trafford by saying he was “really excited to be here” and stressing “I want to achieve success”.He added: “The confidence is that I have a good feeling with the people around, I have...
PREMIER LEAGUE・3 HOURS AGO
The Independent

Erik ten Hag has confirmed Cristiano Ronaldo is in his plans next season as the Dutchman was unveiled as Manchester United’s new manager.Ten Hag was speaking at Old Trafford in his first press conference as new head coach, where he set out his hopes to take the club forwards after a disppointing season ended in a 1-0 defeat at Crystal Palace on Sunday, which Ten Hag watched from the stands. One of the few bright spots in a poor season was the performance of Cristiano Ronaldo, who scored 18 league goals and 24 in total. Asked whether the 37-year-old Ronaldo...
PREMIER LEAGUE・3 HOURS AGO

FULHAM have confirmed the exit of 14 players including TWO of their biggest transfers ever who cost the club a combined £50million. Jean Michaël Seri and Alfie Mawson will depart the club this summer alongside 12 others players. Seri joined the club for a near £30m in the...
PREMIER LEAGUE・38 MINUTES AGO
The Independent

Noel Gallagher has revealed that he required stitches after an inadvertent clash of heads with Ruben Dias’ father while celebrating Manchester City’s Premier League title.The Oasis songwriter is a lifelong fan of the club, and was at the Etihad Stadium as Pep Guardiola’s side sealed the title with a 3-2 comeback victory against Aston Villa.Gallagher, however, was unable to watch the final moments of the game after being forced to seek medical attention after Ilkay Gundogan’s winner.The guitarist explained to talkSPORT: “As the third goal goes in, there is absolute bedlam in the stadium.“Where we sit, Ruben Dias’ family are...
PREMIER LEAGUE・2 HOURS AGO
The Independent

West Ham defender Kurt Zouma has been charged with three alleged offences under the Animal Welfare Act after a video emerged in February that appeared to show him kicking and slapping his cat. Zouma’s brother Yoan, who plays for Dagenham and Redbridge, has also been charged with two alleged offences.The Zouma brothers are expected to appear at Thames Magistrates’ Court on Tuesday.The RSPCA removed the two cats from Kurt Zouma’s home following the video’s publication in February and continues to care for them. Zouma has been accused of two counts of causing “unnecessary suffering” as well as one count of...
ANIMALS・1 HOUR AGO

Tuesday marks the 50th anniversary of Rangers’ only major European triumph to date after they defeated Dynamo Moscow 3-2 in the Cup Winners’ Cup final in Camp Nou.The heroes of that triumph became known as the Barcelona Bears.Here, the PA news agency takes a look back at the careers of the 11 men who made history under manager Willie Waddell.Peter McCloyNicknamed “The Girvan Lighthouse” due to his birthplace and the fact he stood 6ft 4in tall, the goalkeeper joined Rangers from Motherwell in 1970 and went on to make more than 500 appearances for the Ibrox club before retiring in...
SOCCER・1 HOUR AGO
The Independent

Mercedes' trackside engineering director Andrew Shovlin has said there are “new parts in the pipeline” after an impressive showing at the Spanish Grand Prix.Mercedes have grown into the new F1 season after a slow start, and although they remain off the pace of Ferrari and Red Bull, there were signs in Barcelona that George Russell and Lewis Hamilton could be getting back into contention.Russell battled to a third-place finish while Hamilton fought from the back of the pack after a disatrous start to finish fifth, and Mercedes now plan to improve the car further before the next race in Monaco.Shovlin...
MOTORSPORTS・3 HOURS AGO
The Independent

Christian Horner has said that Max Verstappen’s “road rage” during the Spanish Grand Prix was “understandable” after the Dutchman expressed his frustration over the radio in Barcelona.Verstappen eventually took his third consecutive win in Spain, capitalising on Charles Leclerc’s retirement after engine trouble to lead home a Red Bull one-two.The 24-year-old was not happy, however, with a faulty DRS that worked only intermittently during the race, having also lost out on a chance at pole in qualifying due to a loss of power on his final lap.“We can’t even make the f****** DRS work, unbelievable!” Verstappen fumed over team radio...
MOTORSPORTS・3 HOURS AGO