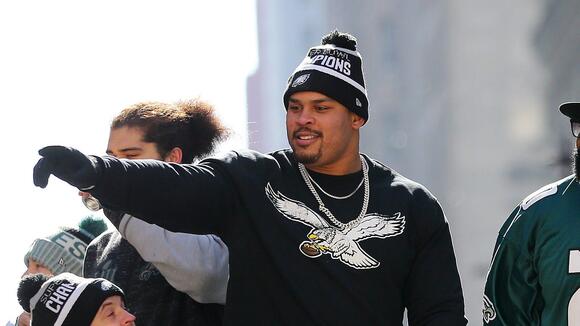 Brooks thanks his teammates and coaches and lastly, the city of Philadelphia.

"Although I may no longer play I'll be an Eagle forever, I'll always bleed green," he said.

Brooks also said he will be applying to business school at the University of Pennsylvania.

Brooks signed a new contract reducing his 2022 cap number from $19.4 million to $7.1 million, seemingly anticipating this news. The only 2022 cash is a $1.12 million non-guaranteed base salary, according to Mike Garafolo .

Brooks, 32, spent the last five seasons with the Eagles, playing in just two games in 2021 after a pectoral strain ended his season early.

Brooks suffers from anxiety and depression and opened up about his battle with anxiety a couple of years ago .

Brooks, a 2012 third-round pick, retires as a three-time Pro Bowler and Super Bowl champion. The Eagles signed Brooks in free-agency in March of 2016 and he'll go down as one of the best free-agent signings in franchise history.

Can Eagles afford a trade for Jessie Bates?

Bates liking a post on Twitter about the Philadelphia Eagles has only added fuel to the fire that he wants out of Cincinnati, and perhaps, wants to fill the need the Eagles have at safety.
PHILADELPHIA, PA・1 DAY AGO
94 WIP Sports Radio

Brandon Graham: Jonathan Gannon will 'open it up' more with improved personnel

As the Eagles put the finishing touches on an outstanding offseason and near-complete overhaul of the roster that began in 2020, it’s time for the entire fanbase to come together and do what’s right: Apologize to Howie Roseman.
PHILADELPHIA, PA・16 HOURS AGO
94 WIP Sports Radio

Thybulle averages 1.6 steals and 1.0 block in just 21.8 minutes per game over his first three seasons, but he has yet to improve at all offensively, scoring under five points per game.
PHILADELPHIA, PA・1 DAY AGO