One of the best times to buy shares of a great company is after a sell-off. That's why the recent pounding which growth stocks have endured provides an excellent opportunity to pick up great stocks from the discount bin.

With that in mind, let's look at two exciting companies that are down sharply over the past 12 months: Veeva Systems (NYSE: VEEV) and DoorDash (NYSE: DASH) . Here's why both of these businesses have the tools to rebound from the recent market upheaval. 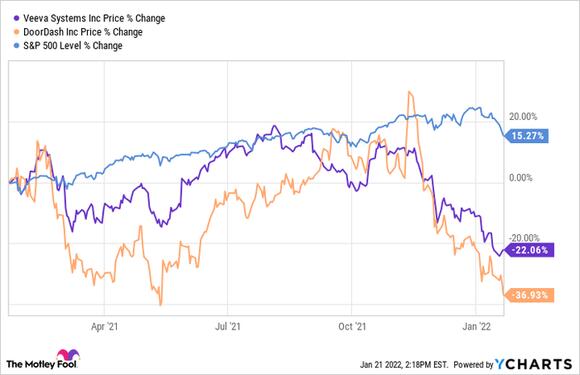 It is challenging to navigate the life sciences industry given its dozens of regulatory hoops.

Thankfully, Veeva Systems makes that task a bit easier for life sciences companies by providing a set of cloud-based tools that ensure regulatory compliance and greatly simplify the process of bringing products to market. Its clients include some of the most prominent pharmaceutical and biotechnology players in the world, such as Eli Lilly , Merck , and Vertex Pharmaceuticals , among many others.

One of the great things about Veeva Systems' business is that it benefits from high switching costs. The company's suite of products is integral to its customers' day-to-day activities. Jumping ship to one of Veeva Systems' competitors would be an expensive proposition. Investors can expect the company to retain the bulk of its current clients while it attracts new ones. 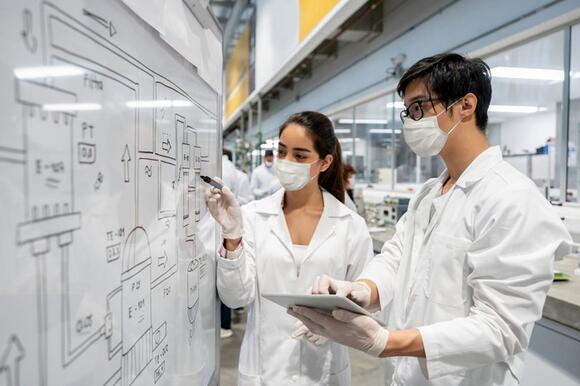 Veeva still has considerable room to grow. The life sciences industry is already valued at more than $2 trillion and growing. The need for the kinds of products the company offers will only increase in the coming years along with the sector it services. Veeva Systems sees a current addressable market of $13 billion, which dwarfs its estimated revenue for fiscal 2022 (which will end on Jan. 31) of $1.8 billion.

Naturally, Veeva may not gobble up this entire market all by itself, but even a fraction of it would help the company significantly grow its revenue and profits. That's before we get into the company's more recent ventures into other, highly regulated areas -- namely, the cosmetics, chemicals, and consumer packaged goods industries.

These massive opportunities explain why Wall Street is so bullish on this healthcare company . Veeva Systems boasts an average price target of $317, according to Yahoo! Finance, which represents significant upside from its current level of $225. I think the Street has this one right. Despite lagging the market in the past year, Veeva could handsomely reward investors who stick around through these tough times.

In a now-familiar trend on Wall Street, DoorDash experienced tremendous success during the worst of the pandemic in 2020, only to fall out of favor last year. The company's shares are down by about 39% over the trailing 12-month period. But the good news is that DoorDash's investors could have a lot to look forward to ahead.

First, the company is one of the leaders in the food-delivery business. As of March 2021, it held a 55% share of the market, according to Statista. Its closest competitor had a 22% slice of the market. Meanwhile, DoorDash is expanding beyond restaurant deliveries and into food deliveries of all kinds, including grocery and convenience deliveries.

In November, DoorDash announced it would acquire Finland-based food-delivery app Wolt in an all-stock transaction valued at 7 billion euros (about $7.9 billion). The transaction is expected to close during the first half of this year. The deal will help DoorDash expand its international presence and unlock an even larger clientele. 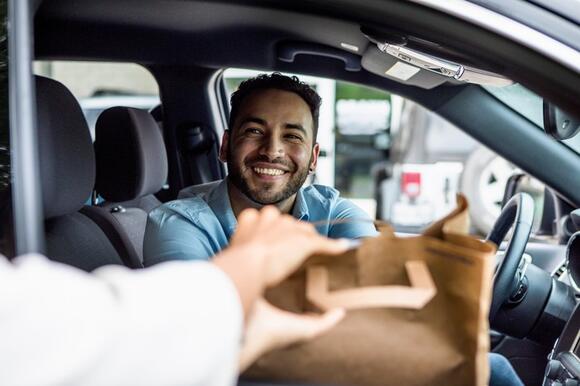 During the third quarter, the company's revenue soared 45% year over year to $1.3 billion. That was on the back of a 47% increase in total orders, which came in at 347 million for the period. DoorDash's marketplace gross order value (GOV) grew by 44% to $10.4 billion. GOV represents the total dollar value of all the orders placed through DoorDash's platform.

One challenge: DoorDash remains unprofitable, reporting a net loss of $101 million for Q3. That's more than twice the $43 million net loss it reported a year earlier. The good news is that there remains significant growth potential for the online food and grocery delivery market as it is severely underpenetrated, both in the U.S. and abroad. Making headway into this market should help the company eventually become profitable.

DoorDash is arguably building a network effect. The more restaurants and grocery stores it adds to its platform, the more consumers will want to join, and vice versa. True, it will have to contend with the competition. But thanks to its leadership position, exciting opportunities, and growing moat, DoorDash looks set to remain a leader in this field for a long time.

10 stocks we like better than Veeva Systems
When our award-winning analyst team has a stock tip, it can pay to listen. After all, the newsletter they have run for over a decade, Motley Fool Stock Advisor , has tripled the market.*

They just revealed what they believe are the ten best stocks for investors to buy right now... and Veeva Systems wasn't one of them! That's right -- they think these 10 stocks are even better buys.

Warren Buffett and Berkshire Hathaway recently revealed they have sold their last remaining investment in Wells Fargo.
STOCKS・15 HOURS AGO
The Motley Fool

The discount retailer provided its first-quarter earnings and an update for the year, and Wall Street didn't like what it saw.
STOCKS・16 HOURS AGO

This 5%-yielding bank has exposure to emerging markets layered on a strong core in a safe country.
STOCKS・19 HOURS AGO
The Motley Fool

These businesses are backed by compelling investment theses.
STOCKS・2 DAYS AGO
The Motley Fool

It may not be as scary as homeowners expect.
REAL ESTATE・1 DAY AGO

Warren Buffett's approach could keep your money safer amid volatility.
STOCKS・20 HOURS AGO

Secular changes in technology and culture favor some names at the expense of others.
STOCKS・20 HOURS AGO
The Motley Fool

The start of a new bull market in the technology sector is a matter of when, not if.
STOCKS・19 HOURS AGO
The Motley Fool

Strong price performance from these three large-cap tokens has investors excited about the near-term prospects of this sector.
STOCKS・16 HOURS AGO
The Motley Fool

The impact of rising costs took investors by surprise this week.
STOCKS・14 HOURS AGO