How to Cook Frozen Whole Lobster, According to a Chef 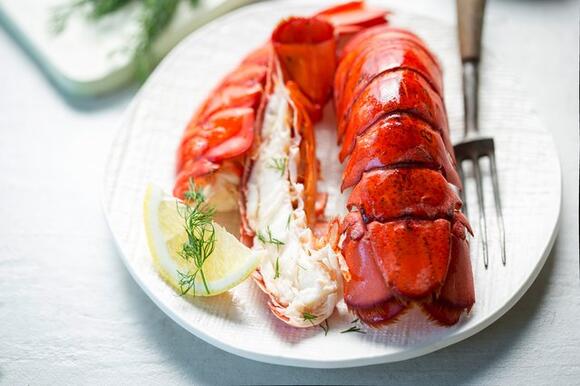 Not many foods can compare to the decadence of a freshly prepared lobster dipped in butter. But unless you live on the coast, finding fresh lobster at your supermarket can be difficult.

Whether or not you live in a land-locked state, frozen lobster can be just as delicious.

Frozen lobster is a cost-effective way to enjoy a delicacy and, in some cases, it can even be fresher than raw or live seafood, says Chef Nik Fields, founder of Chic Chef Co . Generally, there's no big taste difference between fresh or frozen lobster — in fact, the taste boils down to how you prepare it.

Here, celebrity chef Serena Poon shares what you'll need and the steps to follow to cook a frozen whole lobster for a luxurious dinner any night of the week.

How to Prepare Frozen Whole Lobster

Choose the Right Kind of Lobster

The process of cooking lobster begins at the supermarket. Your choice can make a noticeable difference in the final result, so choose wisely.

"The lobster you choose will greatly impact how your dish tastes," Poon says. "Choose frozen cold water lobster (like from Maine) for the best flavor and texture. If you can, select lobster from a quality purveyor that has been flash frozen. It's also important to avoid gray or brown spots on the tail for freshness."

Your lobster must be properly thawed before cooking it.

To thaw frozen lobster, place it in the refrigerator for about 24 hours before you need to cook it.

For those in a time crunch, Poon recommends placing the lobster in a sealed bag in a large glass bowl and running it under cold water in the sink for about 30 minutes.

When you're thawing lobster in cold water, make sure to never let the water get warm — and don't use hot water to thaw frozen food, per the USDA . Doing so can increase your risk of getting foodborne illness.

There are many ways to cook whole lobsters . One of the most common and easiest methods is boiling them, which is what Poon recommends.

For this cooking method, you'll need a large stockpot filled with water about 2/3 of the way full. Add 1/4 cup of Himalayan sea salt , and bring the water to a boil.

Once the water is boiling, add the lobster. Allow the water to return to a boil before turning the heat down slightly. The water should still be bubbling.

Boil a 1-pound lobster for about 10 minutes. If the lobster is larger or you're cooking more than one, add a few more minutes.

When the lobster is done cooking, carefully remove it from the pot with a pair of tongs.

The best part of cooking lobster is enjoying it once it's done. One pound of lobster yields about a 1/3 pound of cooked meat, according to California Sea Grant .

To add flavor to the lobster, Poon recommends serving with melted garlic-herb butter: Make it at home by melting butter and combining it with garlic, celery salt, lemon zest and fresh finely chopped herbs like thyme, dill or basil.

Poon recommends butterflying the lobster tail, which means cutting down the middle to reveal the meat inside. Drizzle it with the melted butter sauce. Serve with a side of melted butter to dip the claw and body meat into.

How to Serve Lobster

Serving your lobster with the perfect sides will take your dinner to the next level.

While you can certainly serve lobster with butter or ghee on the side, Fields recommends that you sprinkle the meat with some citrus, like lemon, to add to the overall flavor. Plus, this will add some vitamin C to your meal.

Lobster is an excellent source of lean protein, Fields says. But you still want to include some veggies and carbs for a more balanced meal. Consider adding some leafy greens or cruciferous veggies to increase the amount of fiber in your dinner. This crucial nutrient can help keep your blood sugar levels and digestive health regular.

To add some more density to your dinner, consider preparing some brown rice or buckwheat. These whole grains are both nutritious and satisfying.

Most wild cherries are edible, but it can be easy to confuse fruit in the forest. A wild cherry tree is poisonous, so avoid the leaves, pits, bark and stem.
FOOD & DRINKS・8 DAYS AGO
LIVESTRONG.com

Here, we spoke to dietitians for the best peanut butter powder options based on factors like taste, texture, price and of course, clean, nutritious ingredients.
NUTRITION・13 DAYS AGO
LIVESTRONG.com

How to Use Stevia Leaves: Powder, Syrup and Recipe Ideas

Here's how to use stevia leaves to sweeten foods and drinks without extra calories. You can make powder and syrup out of your stevia plant's fresh leaves.
FOOD & DRINKS・14 DAYS AGO
LIVESTRONG.com

The 11 Best Lean Animal Proteins, According to a Dietitian

The 10 Best Coffee Flavorings and Syrups, According to Dietitians

Coffee flavorings and syrups are often loaded with sugar and additives. Here, dietitians share the best coffee flavoring products with other health benefits.
FOOD & DRINKS・11 DAYS AGO
US News and World Report

Whether you frequent an upscale salon or a local barber shop, you might feel uncertain about how much to tip – and it’s no wonder. Tipping can feel arbitrary, and you might be unsure about your understanding of tipping etiquette. For instance, are there hard and fast rules around tipping, or is it up to your discretion? Is there a going rate? Do barbers and stylists expect a certain percentage? Is cash best? Do you tip salon assistants?
SCOTTSDALE, AZ・24 DAYS AGO
The Guardian

The exponential increase in saltwater crocodile populations in the Northern Territory in recent decades may be partly a result of them preying on feral pigs, new research suggests. Scientists who have analysed the diets of saltwater crocodiles in the Territory believe the reptiles have shifted from marine prey to predominantly...
ANIMALS・24 DAYS AGO
The Independent

A wedding caterer has been praised for turning down all events where the bride and groom are asking their guests to pay for their own meals.In a recent post shared on the discussion-based site Mumsnet, a user explained that they run a “wedding catering company” that is “based on a food truck” and works for “less formal weddings”.They then revealed that some couples who have reached out to them about catering have been expecting their guests to purchase their own dinners at their weddings, a concept that the caterer said they have been “turning down” because they believe it is...
RELATIONSHIP ADVICE・25 DAYS AGO

Is Eating Too Many Cherries Bad for You?

Find out if eating too many cherries can make you poop and cause diarrhea or other GI issues. Still, cherries are good for you as part of a balanced diet.
HEALTH・14 DAYS AGO
SheKnows

Click here to read the full article. Khloé Kardashian’s perfectly curated kitchen pantry (read: grocery store) is a slice of organized, structured Heaven that puts even the best kitchen storage solutions to shame. And if you’ve ever caught a glimpse of her color-coordinated fridge (and her urge to keep everything super neat and tidy inside it), the immaculate state of her pantry really should come as no surprise. Luckily for us, we can recreate some of the organizational magic with Aldi’s new glass storage containers. View this post on Instagram A post shared by Aldi Connoisseur 🌈 (@aldi.is.my.jam) Aldi fan account,...
CELEBRITIES・24 DAYS AGO
LIVESTRONG.com

What Happens if You Swallow a Cherry Seed?

Here's what happens if you swallow a cherry seed or pit accidentally. Find out if cherry pits are poisonous, if you should be concerned and how to prevent it.
HEALTH・15 DAYS AGO
LIVESTRONG.com

Carbs have been criticized over the last couple of years. And while eating too many refined, highly processed carbs (which can cause quick blood sugar and insulin surges and crashes) isn't good for you, other types of carbs can likely lengthen your lifespan. Indeed, healthy complex carbs (which are digested...
NUTRITION・12 DAYS AGO

Exercise is one of the best things you can do for your joints. Movement helps deliver synovial fluid, which nourishes your joints with important nutrients and prevents friction between them, according to the U.S. National Library of Medicine. But not all exercises are good for your joints, and some can...
WORKOUTS・12 DAYS AGO
LIVESTRONG.com

Feeling shaky or trembling after waking up in the morning or from a nap can be worrisome experience. Here's why it might happen and what you can do about it.
HEALTH・11 DAYS AGO
LIVESTRONG.com

These are the best fiber supplements for diverticulosis and non-symptomatic diverticulitis, including the best powder, capsules, chewable and best on a budget.
NUTRITION・6 DAYS AGO
LIVESTRONG.com

If you have a nightshade allergy or sensitivity, you may be in search of a list of foods to replace them with. These nightshade vegetable alternatives can help.
RECIPES・17 DAYS AGO
LIVESTRONG.com

7 Reasons Your Ear Feels Clogged, and What to Do About It

Doctors break down what causes a clogged ear — including earwax, allergies and certain ear defects — along with what you can do to open a blocked ear.
DISEASES & TREATMENTS・14 DAYS AGO
LIVESTRONG.com

30 Foods High in Vitamin A for Sharp Vision

24 Foods High in Potassium for a Healthy Heart

Bananas are high in potassium but other foods, such as beet greens, salmon, beans, avocado, potatoes, squash and coconut water, contain more of the mineral.
NUTRITION・1 DAY AGO
LIVESTRONG.com

These are the best cooling sheets for "hot" sleepers, including the best linen, bamboo and cotton choices. Plus, learn what to look for in cooling sheets.
LIFESTYLE・15 DAYS AGO