Shares of electric vehicle maker Rivian Automotive (NASDAQ: RIVN) opened higher on Wednesday. After two days of volatile trading, investors and traders appeared to be in a more upbeat mood while awaiting the results of the Federal Open Market Committee's (FOMC) meeting.

Rivian's shares were up as much as 8% in early trading before settling back a bit. As of 10:30 a.m. ET, the company's shares were still up about 3% from Tuesday's closing price.

It has been a wild week for shares of early-stage growth companies, including those of Rivian and other electric vehicle makers. Investors have been worried about the potential impact of higher interest rates, with good reason: With inflation at levels not seen in decades, it seems all but certain that the FOMC will decide to raise rates this year, perhaps as soon as March.

The FOMC has been meeting since Tuesday morning; Federal Reserve chairman Jerome Powell is expected to offer some guidance on the committee's plans after the meeting concludes on Wednesday afternoon. 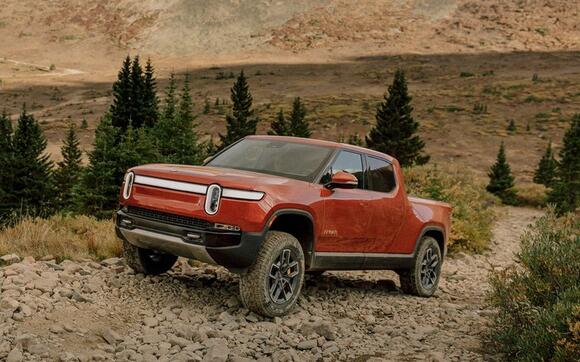 Rivian is working to ramp up production of its R1T electric pickup and the closely related R1S SUV. Image source: Rivian Automotive.

As for Rivian, Wall Street isn't abandoning ship. But some analysts are rethinking their financial models in anticipation of higher rates. In a new note on Wednesday, J.P. Morgan analyst Ryan Brinkman maintained his bank's neutral rating on Rivian, but cut its price target to $84 from $104 after factoring in the effects of a higher discount rate on the company's likely growth.

For what it's worth, Brinkman made clear that the company's 2021 deliveries miss had no impact on his valuation. (And rightly so, I say. That "miss" triggered a big sell-off, but it was more about communications than about any change in Rivian's fundamentals or investment case.)

Electric vehicle investors can look forward to more details on Rivian's 2021 results and 2022 production ramp-up plan when it reports its fourth-quarter results, likely in the second half of February.

These stocks are trading at a discount, making them better buys for income investors.
NEW YORK CITY, NY・2 DAYS AGO
The Motley Fool

Among the Dow Jones Industrial Average's 30 components are three that analysts believe could more than double over the next year.
STOCKS・2 DAYS AGO

A 5x return isn't a slam dunk with these stocks. But it's not a farfetched proposition.
STOCKS・18 HOURS AGO

Boost your passive income stream with companies you can count on.
STOCKS・1 DAY AGO

Brookfield Infrastructure is performing quite well during the current market downturn.
STOCKS・19 HOURS AGO
The Motley Fool

Berkshire Hathaway stock has a long history of beating the market, and is well-positioned to outperform in the future.
STOCKS・14 HOURS AGO
The Motley Fool

Hint: It's not Apple or Chevron.
STOCKS・1 DAY AGO
The Motley Fool

Why Bitcoin, Coinbase, and Silvergate All Bounced Back on Friday

There's a crypto bounce to end the week.
STOCKS・1 DAY AGO
The Motley Fool

These players have what it takes to keep growing over time.
STOCKS・17 HOURS AGO
The Motley Fool

Investors found a small ray of sunshine in the company's latest financial results.
BUSINESS・1 DAY AGO
The Motley Fool