The Dallas Mavericks weren’t the only team to get embarrassed on Tuesday night. The Washington Wizards, after holding a 35-point lead against a Los Angeles Clippers team that doesn’t have Kawhi Leonard or Paul George, ended up blowing the lead and losing 116-115.

“I have no words besides ‘embarrassing,’” said Wizards star Bradley Beal.

Washington, after showing a lot of promise in the first few weeks of the season, has now gone just 13-22 over its last 35 games and is barely clinging to the final play-in spot in the Eastern Conference.

We have pipe-dreamed the idea of the Mavs trading for Bradley Beal over the last handful of years at DallasBasketball.com, but he hasn’t really shown much openness to actually being traded from Washington… until maybe now.

“I have a lot of conversations with (GM) Tommy (Sheppard),” said Beal. “We’re very transparent with what we want to do and what my future looks like. And yeah, the (trade) deadline is coming up, and I’m very well aware of how we’re playing and how other teams are playing and what my interests are.”

In typical Beal fashion, though—which we can’t really be mad at because it’s almost Dirk Nowitzki-esque—he went on to express just how much he desires to win where he’s at, no matter how wishful that thinking may be.

It's no secret the New York Knicks are eyeing Dallas Mavericks guard Jalen Brunson ahead of free agency. There's apparently a mystery team to keep close tabs on for a massive offer.

DallasBasketball.com brings you NBA updates as they relate to your Dallas Mavericks and the rest of the league.

“Granted, I’m giving this organization an opportunity to prove that and show that, and obviously I’m a big factor in that, too, in producing and playing well and performing,” said Beal.

“But I want to win, and we all know that. … We’ve got the pieces, we have the assets, we’ve got the depth—everything that we bragged about at the beginning of the year. … Speculations are going to be what they are. I can’t control that. But I know what comes out of my mouth, and I know where my heart is, and everyone will know.”

What’s coming out of Beal’s mouth there feels conflicting in a way, almost as if his desire to win is large enough that he truly has considered the idea of leaving Washington. But on the other hand, Beal doesn’t want to be viewed as a villain or a guy who quit on his team, which is understandable as well.

The Mavs have been looking for that ‘next big piece’ for a while now, just waiting on the right opportunity to arise, and they should definitely continue to monitor Beal’s situation going forward. Other teams could offer better trade packages for Beal, but sometimes making big splashes comes down to having the right timing, as we saw three years ago with the Mavs’ trade for Kristaps Porzingis.

Although it may be a pipe-dream to envision Beal next to Luka Doncic in Dallas, it honestly may be even more of a pipe-dream for Beal to keep believing that anything will ever change with his situation in Washington when it comes being able to win big. Until he signs another contract with the Wizards, the trade speculation surrounding Beal will continue. 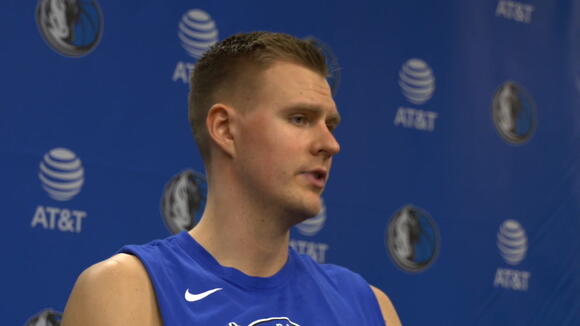 The Dallas Mavericks look to bounce back and hand the Golden State Warriors their first home postseason loss in Game 2 on Friday night.
DALLAS, TX・2 DAYS AGO
DallasBasketball

The Mavericks staggered Golden State early with 15 first-half 3-pointers, but went cold in the second half in falling in an 0-2 hole in the Western Conference Finals.
DALLAS, TX・1 DAY AGO
DallasBasketball

As the 2021-2022 season rolls on, keep up with all news as it relates to the Dallas Mavericks right here with our DallasBasketball.com NBA Tracker.
DALLAS, TX・3 HOURS AGO
DallasBasketball

Perhaps the Mavs can finally get Luka Doncic the true secondary star he needs to lessen his burden of carrying the team.
CHICAGO, IL・2 DAYS AGO
DallasBasketball

After blowing a 19-point lead, Luka Doncic attributes the 126-117 Game 2 loss against the Warriors to “bad defense, that’s it.”
NBA・1 DAY AGO
DallasBasketball

According to the league, the award celebrates players who have made strides in fighting for social justice and advocating for equality.
DALLAS, TX・9 HOURS AGO

The Dallas Mavericks seek to avoid falling down 3-0 in their series against the Golden State Warriors in the Western Conference Finals. Here's what we're looking for in Game 3.
DALLAS, TX・8 HOURS AGO
DallasBasketball

Doncic usually shines the brightest in the most pressured situations, and he’s been that way since his pre-NBA days.
DALLAS, TX・2 DAYS AGO
DallasBasketball

The Dallas Mavericks coughed up a golden opportunity in Game 2.
DALLAS, TX・1 DAY AGO

"We died in the third quarter by shooting that many 3's ..." - Kidd.
NBA・1 DAY AGO
DallasBasketball

The Golden State Warriors contained Luka Doncic and the Dallas Mavericks in Game 1 of the Western Conference Finals.
DALLAS, TX・2 DAYS AGO
DallasBasketball

The Mavericks knew they would have to scratch and claw to upset the Golden State Warriors in Game 1, but it was Doncic who was left with a battle scar.
DALLAS, TX・2 DAYS AGO
DallasBasketball

As the 2021-2022 season rolls on, keep up with all news as it relates to the Dallas Mavericks right here with our DallasBasketball.com NBA Tracker.
DALLAS, TX・1 DAY AGO