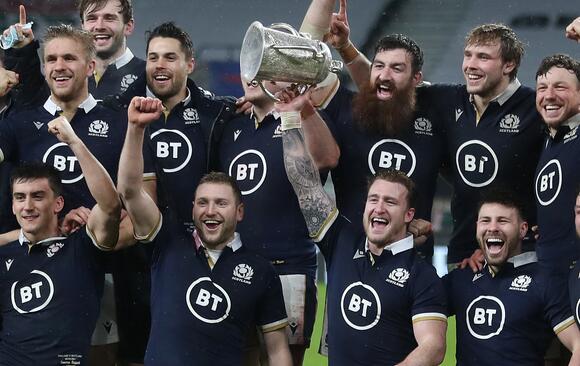 Gregor Townsend believes a mouth-watering opener at home to England will focus the minds of his Scotland players as they go in search of Six Nations success.

The Scots have high hopes of making a significant impact at this year’s tournament, with some big results over the past 18 months allied to strong competition for places fuelling the feelgood factor.

Head coach Townsend feels his team can draw additional motivation from the fact their first Six Nations match in almost two years in front of supporters will be the Calcutta Cup showdown with the Auld Enemy at BT Murrayfield on Saturday week.

“I believe it’s the most eagerly awaited game we’ve had for a few years,” he said. “The Six Nations is a brilliant tournament, it’s a real privilege to be involved in it, and to have crowds back this year makes it even more special.

“We know this is the biggest game we face, it’s such a historic fixture. We’re playing for a famous trophy and it’s 151 years old. To have it first up adds to the buzz around the Six Nations. It will focus our minds next week.

“The games in November were excellent in terms of seeing fans back when we arrived at the stadium, the noise they generated when we came on to the field and how they helped us through those games. So to have them there for our biggest fixture of the year will be a great boost to us.

“We’ve also got three away games this year so we’ll also have to handle those occasions where the crowd are against us and for the home team. But everyone involved in rugby can’t wait to play in front of supporters again for this Six Nations.”

Scotland will be defending the Calcutta Cup after winning at Twickenham last year for the first time since 1983.

Eddie Jones’ side finished fifth in last year’s Six Nations, with their only wins coming against Italy and France, but Townsend believes their autumn victories over Australia and South Africa are a clear sign that they represent a serious threat for this year’s tournament.

He said: “After our game against them last year, England played well later on in last year’s championship. I thought their game against France was their best performance and then in November they kept building.

“Their win against South Africa, the world champions, shows they are a quality side. They were moving the ball and had various attacking threats, so we’ll wait and see if that’s still the case in the Six Nations because it’s a different tournament and has a different feel to the November internationals.

“It looks like they’re going to add more of an attacking side to their game than they had in the last championship.”

Duhan Van Der Merwe and Kyle Rowe have missed training this week due to illness, while Josh Bayliss has been absent through concussion, but Townsend is optimistic about having all three available in the lead-up to the England game.

He said: “They’re all making progress. Both Duhan and Kyle are all feeling much better and if they continue to make progress, we believe they’ll be available for our camp next week, which begins on Sunday night.

“Josh still had symptoms a couple of days ago but we believe he’s now clear and is starting the return-to-play process. We’ll just wait and see over the next few days on all three players.”

Silver casket Mary, Queen of Scots was thought to own acquired for nation

An “extraordinary” silver casket believed to have been owned by Mary, Queen of Scots has been acquired for the nation.It is thought the small box was given to Mary by her first husband, Francois II of France, and came to Scotland with her in 1561 after his death in 1560.The casket has now been acquired by National Museums Scotland (NMS) from Lennoxlove House Ltd, its owner since the middle of the 20th century.It has been obtained for £1.8 million thanks to support from the National Heritage Memorial Fund, Art Fund, the Scottish Government and several trusts, foundations and individual donors.Made...
U.K.・2 HOURS AGO
The Independent

Gareth Bale has been declared fit to lead Wales’ bid to reach a first World Cup for 64 years.Wales boss Robert Page has named skipper Bale in a 27-man squad for the World Cup play-off final against Scotland or Ukraine in Cardiff on June 5.The Dragons also face four Nations League ties in June, with home and away games against Holland as well as a trip to Poland and a visit from Belgium.🏴󠁧󠁢󠁷󠁬󠁳󠁿 CARFAN CYMRU 🏴󠁧󠁢󠁷󠁬󠁳󠁿Five matches. One @FIFAWorldCup play-off final. 🎟 https://t.co/hsH0UFCPVt #TogetherStronger pic.twitter.com/kAGuWLSiUV— Wales 🏴󠁧󠁢󠁷󠁬󠁳󠁿 (@Cymru) May 19, 2022Bale has made just two cameo substitute appearances for Real...
SPORTS・3 HOURS AGO
The Independent

New England captain Ben Stokes will lead his side out against New Zealand at Lord’s next month without a host of fast bowling options available to him.Here, PA news agency looks at the fitness issues affecting England’s pace attack.Jofra ArcherWe're all with you and we're all gutted for you, @JofraArcher 😔— England Cricket (@englandcricket) May 19, 2022A longstanding elbow problem means Archer has not played for England since March 2021 but the 27-year-old was eyeing a T20 comeback this summer, with a view to kickstarting his international career. Those hopes were scuppered by the news that he has suffered a...
SPORTS・2 HOURS AGO
The Independent

The EFL play-offs were marred by further crowd misbehaviour on Wednesday night as a pitch invader barged into Mansfield player Jordan Bowery during the League Two semi-final second leg at Northampton.The man made his way onto the pitch towards the end of the match, which Mansfield won 1-0 to complete a 3-1 aggregate victory.The individual was seen to barge into Bowery, who stayed on his feet, before Northampton players and stewards intervened and led the pitch invader off.A flare was also thrown onto the pitch at the same point in the match as the pitch invasion.No arrests have been made...
SPORTS・2 HOURS AGO

England bowler Jofra Archer has suffered another major injury setback and is facing an indefinite lay-off after a stress fracture of the lower back.World Cup winner Archer has been sidelined for over a year by a persistent elbow problem that has required two operations but was targeting a comeback for Sussex in the Vitality Blast later this month.There were hopes that he could play some Twenty20 cricket for England before the end of the season but things have taken a sharp turn for the worse.The England and Wales Cricket Board has confirmed the 27-year-old seamer has sustained another worrying injury...
SPORTS・2 HOURS AGO
The Independent

Thomas Frank is hopeful Christian Eriksen will agree to extend his stay at Brentford.The former Tottenham playmaker has been impressive since joining the Bees on a short-term deal in January.Eriksen had been looking for a club to restart his career after suffering a cardiac arrest while representing Denmark at Euro 2020.The 30-year-old’s form since means he is unlikely to be short of potential suitors but, after securing Brentford’s place in the Premier League for another year, manager Frank feels optimistic.The Dane said at a press conference: “I would love to say 100 per cent, but I am convinced there is...
PREMIER LEAGUE・2 HOURS AGO