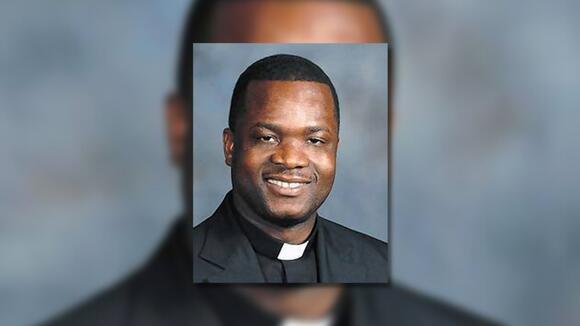 A Florida priest is seeking forgiveness from God and his parishioners after learning that he fathered a child.

A spokeswoman from the Archdiocese of Miami confirmed Tuesday that Monsignor Chanel Jeanty, pastor of Saint James Catholic Church , fathered a child with a woman he had a relationship with that ended over a year ago.

The Archdiocese say Jeanty didn't learn about the child from the mother, but rather from a third party instead.

According to the church, Jeanty has reached out to the mother and will contribute to the support of his child.

A statement from the archdiocese read “Monsignor Jeanty has already sought God’s forgiveness, and he is asking for the forgiveness of his parishioners, who will be disappointed when they learn of his lapse. Monsignor Jeanty must face his parishioners and seek to regain their trust, as he continues to serve, and at the same time attends to his responsibilities to the child.”

Jeanty is allowed to remain in the priesthood due to The Vatican's exceptions for those who break their vow of celibacy.

Two of those exceptions include fathering a child and openly acknowledging that child.

Canton Exalus, a parishioner at Saint James Catholic Church , says he’s surprised to hear what happened but can find forgiveness for Jeanty, telling Local 10 News "I know he’s a good person, but I don’t know his heart. He’s human.”

Priedts are Men, they should be allowed to Marry.I would rather hear he had a sexual relationship with a Woman instead of the Alter boys.

You don’t need any forgiveness just leave the priesthood to take care of your fatherhood. That’s a responsibility!

Why ask for forgiveness? Was it consentual? Will you be raising the child you were given? Celebracy was man's idea, not ours. Try marriage, good sir; that was our idea. 🎯💝🦉

The poster offered a solution for what someone should do should they see someone in the restroom they don't think matches the sign on the door.
RELIGION・26 DAYS AGO
Newsweek

Bodycam footage captured the snake slithering around the room as an officer attempted to capture it.
BOYNTON BEACH, FL・25 DAYS AGO
CBS News

Police in Alabama say a South Carolina truck driver has confessed to killing a woman who disappeared 21 years ago and to hiding her body in a suitcase. Police in Bessemer, Alabama told news outlets that South Carolina native Brian Jones traveled back to Alabama last month and admitted to killing 41-year-old Janet Luxford in 2001. He then led investigators to a green suitcase with bones inside, police said.
BESSEMER, AL・25 DAYS AGO
Fox News

A sheriff in Florida arrested his own daughter on drug charges as his department continues its war on addictive substances. Franklin County Sheriff A.J. Smith gave a statement on April 19 confirming that his daughter, Kristen Kent, had been arrested under suspicion of meth trafficking two days prior. "Methamphetamine does...
FLORIDA STATE・25 DAYS AGO

The pontiff has previously said that bishops should "not going around condemning or not condemning."
CONGRESS & COURTS・14 HOURS AGO
People

Megan Fox wants her kids to express themselves however they please. In a wide-ranging interview with Glamour U.K. for their April cover story, the 35-year-old actress opens up about how she teaches her children, Journey River, 5, Bodhi Ransom, 8, and Noah Shannon, 9, about gender identity and encourages them to be confident in who they are.
FAMILY RELATIONSHIPS・25 DAYS AGO
CBS News

A 60-year-old man who has been charged in the January 6 insurrection at the Capitol has been identified as the son of a fames American artist. Vincent Gillespie, who has been in a legal battle against his stepmother to gain control of paintings by his father, Gregory Gillespie, was arrested in February on charges relating to the Capitol riot.
ATHOL, MA・25 DAYS AGO
NBC News

A Florida woman has been arrested after allegedly making a bomb threat to her son’s high school, enraged that her son wasn't being fed enough at the cafeteria. Anaya Metoya Smith, 41, was arrested Wednesday in connection with a threatening voicemail she left at Cocoa High School on Feb. 3 around 5:30 p.m., saying she’d "blow ... up" the school, according to the probable cause affidavit. The city of Cocoa is about 45 miles east of Orlando.
ORLANDO, FL・26 DAYS AGO

"Not only was that so disgusting but she was also starving your child," one user commented.
FAMILY RELATIONSHIPS・25 DAYS AGO
Newsweek

Fellow parents and teachers were disturbed by the man's behavior and praised the mom for stepping in to protect her daughter.
FAMILY RELATIONSHIPS・25 DAYS AGO
Newsweek

"Their house their rules. Don't like it? Move out and let your brother & his family live in peace," one commenter wrote.
FAMILY RELATIONSHIPS・25 DAYS AGO
OK! Magazine

The Santa Fe Sheriff doesn't believe Alec Baldwin is out of the woods just yet in regards to the ongoing investigation into Halyna Hutchins' death on the Rust film set. The late 42-year-old cinematographer was killed while on set of the Western film in October 2021 after the actor, 63, fired a prop gun that contained live rounds. While multiple individuals involved in the production of the film — including Baldwin, the film's assistant director David Halls, armorer Hannah Gutierrez-Reed and more — have been questioned about their apparent roles in the fatal mishap, the Santa Fe Sheriff's Department doesn't...
SANTA FE, NM・25 DAYS AGO
The Independent

A hunting guide in Utah has been charged with illegally baiting a bear which was shot by Donald Trump Jr during a hunt in the state, a report says.Wade Lemon faces five years behind bars if convicted over the May 2018 killing, and prosecutors say there is no evidence that the former president’s eldest son would have known about the alleged baiting.Mr Trump is not named in court papers but his identity as the shooter was confirmed by the Utah Department of Natural Resources, according to The Utah Investigative Journalism Project and The Salt Lake City Tribune.Davis County Attorney Troy...
UTAH STATE・1 HOUR AGO