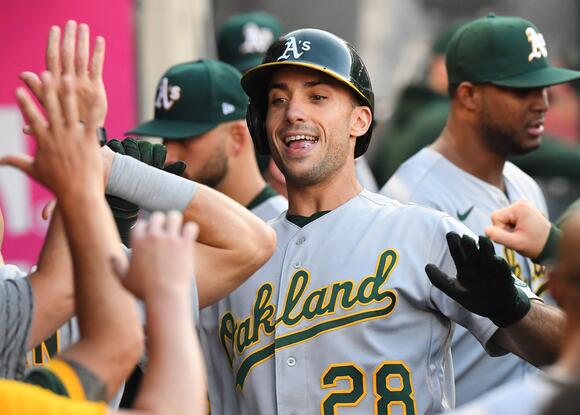 Earlier this week some reports surfaced about Matt Olson and the Braves and A's talking about a possible deal for the slugging first basemen before the current work stoppage began.

While it may have caused some to panic about Freddie Freeman being back, Braves broadcaster Chip Caray still feels that Freeman returning is the first choice, but that having a backup plan is the GM's job and Matt Olson would be a pretty good one.

"His numbers speak for themselves, a terrific, elite young player. Everybody is hopefully that Freddie will sign, but the job of a general manager is to hedge bets, make sure he has a Plan B in place, not just for Freddie Freeman but any player," says Caray. "If you can't have Freddie, that's business, you have to be prepared and change course and Olson would certainly fit that bill."

For Braves fans who aren't overly familiar with Olson, he is a 27-year old two-time Gold Glove winner who sandwiched an injury-riddled 2020 season with 36 home runs in 2019 and 39 bombs in an All-Star campaign in 2021.

The Braves would have to trade for Olson as he is not currently scheduled to hit free agency until after the 2023 season.

To hear all of Chip Caray's comments, click here .

The Atlanta Braves have more than 1 problem right now

Andy Bunker and Randy McMichael were joined by 92.9 The Game Atlanta Braves Reporter Joe Patrick. Andy and Randy started off their conversation with Patrick discussing the Braves recent team struggles.
ATLANTA, GA・1 DAY AGO
92.9 The Game

Braves’ insider Grant McCauley likes what he’s seeing from Marcell Ozuna and Adam Duvall as of late and sees an opportunity for the Braves to gain ground in the NL East with a favorable schedule on the horizon.
ATLANTA, GA・6 HOURS AGO
92.9 The Game

Atlanta Falcons Offensive Coordinator Dave Ragone describes his expectations for the offense this coming season and what has him so excited about the possibilities for that unit.
ATLANTA, GA・1 DAY AGO

Pope kings once again, sweeps Allatoona for GHSA 6A title

Under the direction of new head coach, Chris Turco, the Pope Greyhounds baseball team would sweep the Allatoona Buccaneers to claim the 2021-2022 GHSA 6A state championship.
MARIETTA, GA・1 DAY AGO