FACT CHECK: Wisconsin legislature did not vote to recall its electoral votes for Joe Biden 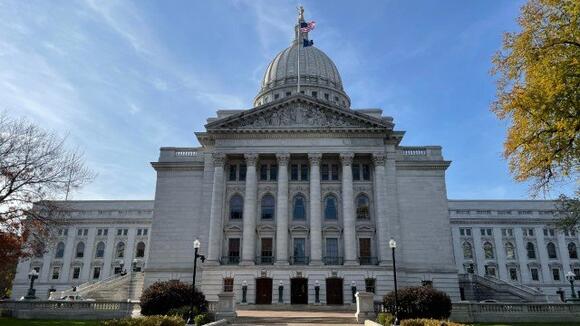 MADISON — A resolution introduced in the Assembly Tuesday by a Republican representative to pull back Wisconsin’s ten electoral votes for Joe Biden is illegal and will die in committee, leading Republicans say.

“Not only is it illegal, it’s just plain unconstitutional,” Assembly majority leader Jim Steineke tweeted of the resolution introduced by Rep. Timothy Ramthun. Steineke, who is not seeking reelection this fall , chairs the Rules Committee that the resolution was sent to and made clear the resolution would die there.

False claims about the resolution have gone viral online, with the Gateway Pundit publishing an article falsely claiming the Assembly had voted to withdraw its electoral votes for Biden. While the right wing outlet has since tweaked their headline, saying that the resolution was simply “voted to advance”, the information is still incorrect–Rep. Steineke said in a tweet that no votes were cast.

Despite that, the disinformation is still spreading. A tweet from Kari Lake, a GOP candidate for governor in Arizona with more than 107,000 Twitter followers, is spreading with the original disinformation from Gateway Pundit and has picked up almost 6,000 retweets and 13,400 likes at the time of this article’s publishing. It was retweeted by the chair of the Arizona Republican party, who has more than 178,000 followers.

Rep. Ramthun was disciplined by Assembly Speaker Robin Vos last week by reassigning his only staffer to another lawmaker’s office. Vos said he did this because Rep. Ramthun was spreading lies about fellow Republican lawmakers including Vos, but said in a press conference that Rep. Ramthun had a right to his false beliefs about the election results.

Rep. Ramthun used a process to bring the resolution to the Assembly floor that requires it to be sent to the Rules committee, which is the committee that schedules floor votes and is chaired by Rep. Steineke.

“As chair of the Rules Committee, there is ZERO chance I will advance this illegal resolution,” Steineke tweeted.

The 2020 election results for Joe Biden in Wisconsin have been repeatedly upheld by both recounts and court rulings, and there’s been no evidence to back up claims of widespread voter fraud.

Despite that, the Assembly continues its investigation into the election, spearheaded by Michael Gableman and staff who have questioned the validity of the results, or tried to overturn them in court.

One of the 10 Republicans who attempted to cast Electoral College ballots for Donald Trump even though he lost Wisconsin is running to become chairman of the state elections commission where he currently serves as a member. Bob Spindell has been an outspoken member of the bipartisan commission and supporter of the investigation into the 2020 election being led by a former Wisconsin Supreme Court justice. Spindell said Monday he is the most qualified to help the image of the commission as chair. Under state law, the next chair must be a Republican. The commission scheduled a Wednesday vote.
WISCONSIN STATE・1 DAY AGO
Channel3000.com | News 3 Now

MIDDLETON, Wis. — Wisconsin gubernatorial candidates entered the state GOP convention Saturday with one question on their minds. Who would get the party’s endorsement?. The answer was a new one. Nobody would. The move came after a heated morning debate, where delegates elected to add a “No Endorsement”...
WISCONSIN STATE・2 DAYS AGO
Channel3000.com | News 3 Now

MADISON, Wis. (AP) — The Wisconsin Supreme Court wrestled Tuesday with whether to block a Madison school district policy that prohibits staff from informing parents that their children have changed genders, with opponents arguing the policy amounts to a secret experiment on children and supporters countering that the guidance protects student privacy.
MADISON, WI・11 HOURS AGO
Channel3000.com | News 3 Now

For the Record: State fails to close ‘legal loophole’ for domestic violence offenders; state GOP doesn’t back candidate for governor

MADISON, Wis. — Republicans will debate how to move forward with the endorsement process when they are in Middleton this weekend at the state party convention. All four candidates running for governor will be eligible to receive the party’s endorsement, but the party may also consider going with a no endorsement option. The debate over not only who to endorse,...
MADISON, WI・4 DAYS AGO
Channel3000.com | News 3 Now

A unanimous Wisconsin Supreme Court has broadened who can legally carry concealed weapons in the state, overturning a lower court’s ruling dealing with a man whose license was revoked due to a domestic violence conviction.
WISCONSIN STATE・4 DAYS AGO
Channel3000.com | News 3 Now

MADISON, Wis. — A case of bird flu has been found in a backyard flock in Bayfield County in northwestern Wisconsin, the state’s Department of Agriculture, Trade and Consumer Protection said Monday. The latest case brings the total number of Wisconsin counties that have seen highly pathogenic avian influenza in domestic or commercial flocks this year to 14. Cases have...
BAYFIELD COUNTY, WI・1 DAY AGO
Channel3000.com | News 3 Now

MADISON, Wis. — The 32nd annual Law Enforcement Memorial Ceremony took place at the Wisconsin State Capitol on Friday. The event, which coincides with National Police Week, remembers law enforcement officers killed in the line of duty. A procession of squad cars made its way from Olin-Turville Park to the Capitol for the event. Prior to the procession, the Wisconsin...
WISCONSIN STATE・4 DAYS AGO
Channel3000.com | News 3 Now

Buckle up! State Patrol to step up Click It or Ticket enforcement

MADISON, Wis. — Wearing a seatbelt while driving is always a good idea, but it’s even more important for the next two weeks. The Wisconsin State Patrol will increase its enforcement of seat belt laws between Monday and June 5, as part of the annual Click It or Ticket campaign. WisDOT said half of people involved in fatal crashes in...
WISCONSIN STATE・1 DAY AGO
Channel3000.com | News 3 Now

WEST SALEM, Wis. (WKBT) — Diesel prices are hitting record highs across the country. For many diesel consumers, staying off the roads to keep costs down isn’t an option. Diesel prices were just over $3 a gallon a year ago, according to the American Automobile Association. Now, prices are more than $5 in Wisconsin. That’s about a 75% price surge…
WEST SALEM, WI・4 HOURS AGO

MILWAUKEE (AP) — A Wisconsin man convicted in a $2.4 million investment scheme involving more than 20 victims has been sentenced to nearly three years in prison. Jeremy Arrington, of Middleton, pleaded guilty earlier to one count of wire fraud. Authorities say several of the investors lost their retirement...
MIDDLETON, WI・4 DAYS AGO
Channel3000.com | News 3 Now

230 Exact Sciences employees, including 50 in Wisconsin, being laid off

MADISON, Wis. — Roughly 230 employees of Exact Sciences, including 50 in Wisconsin, are being laid off, the company confirmed Thursday. In an email Thursday evening, the company said the affected employees were notified of the layoffs on Tuesday. Affected workers held a variety of jobs, but lab staff and international employees were not affected. Laid-off workers are being offered...
MADISON, WI・5 DAYS AGO
Channel3000.com | News 3 Now

MADISON, Wis. — The Wisconsin Department of Natural Resources needs help protecting mother turtles and their babies. Nesting season for Wisconsin’s 11 turtle species lasts from late May through June, and the animals could begin laying eggs in yards and near roads. The DNR said that many female turtles are run over by vehicles and killed each year as they...
WISCONSIN STATE・1 DAY AGO
Channel3000.com | News 3 Now

MADISON, Wis. — As families with infants continue to scour store shelves for baby formula, state health officials are sharing tips for how to deal with the ongoing shortage. Prompted by supply chain issues and a recall of some powdered formulas, the shortage has prompted some Wisconsinites to venture across state lines in search of formula. At the national level, President Biden recently invoked the Defense Production Act to increase supply throughout the country.
WISCONSIN STATE・5 DAYS AGO