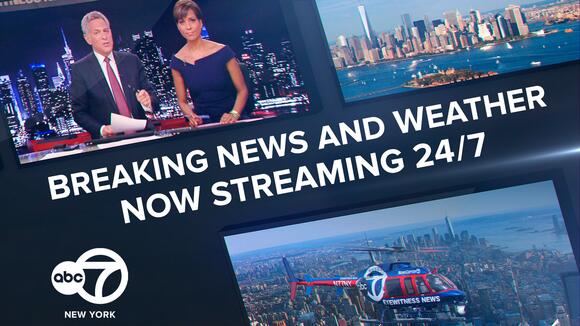 A major nor'easter walloped New York City and the Tri-State area to start the weekend, producing more than a foot of snow in some parts and near blizzard conditions at times. The National Weather Service did confirm a blizzard along the New Jersey coast, across Suffolk County, and in New London, Connecticut. The three criteria for a blizzard are blowing or falling snow, winds of at least 35 miles per hour, and visibility of a quarter mile or less for at least three hours.

As the fierce nor'easter took shape overnight Friday, it became a 'bomb cyclone' according to the National Weather Service. In a 12-hour period, from Friday night to Saturday morning, this storm dropped 26mb (0.77") which qualifies this storm as a bomb cyclone. Bomb cyclone is less technical term meteorologists often use to refer to bombogensis , which is when a storm undergoes rapid strengthening. While the storm has wound down through much of the area, gusty winds and hazardous conditions remain a concern Saturday night into Sunday. The eastern end of Long Island and parts of the Jersey shore were hit the hardest as snow showers brought close to two feet. Kristin Thorne has more from Port Jefferson

Kristin Thorne has more on conditions in Suffolk County.

Islip recorded at least 22 inches of snow into Saturday evening, and Bayville in Ocean County recorded 21 inches. This nor'easter has given Atlantic City its snowiest January on record, beating out January of 1987, which tallied 20.3 inches of snow. So far, locations around the area have recorded as much 16 inches. Meanwhile, Central Park in New York City picked up roughly 7.5 inches. RELATED: How much snow fell across New York City and the Tri-State 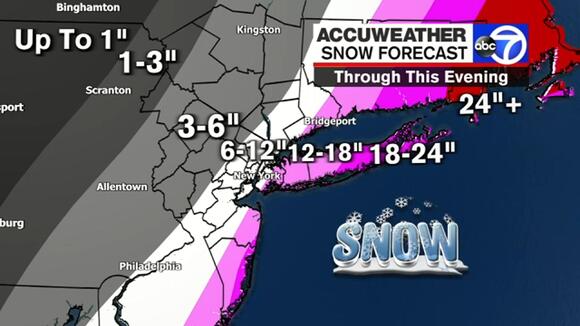 The storm was accompanied by strong wind gusts, which will cause blowing and drifting. High temperatures will only reach the low 20s and those blustery winds will make it feel more like the single digits. We'll see subzero wind chills overnight.

WATCH: Weather Or Not with Lee Goldberg - now available on our connected TV apps for Fire TV, Roku, Apple TV and Android 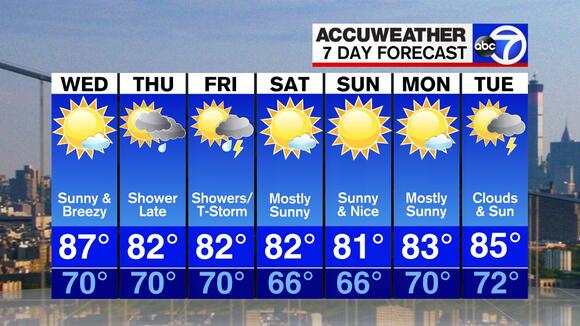 Share your weather photos and videos , and Eyewitness News may show them on TV or any of our digital and social platforms

SMH WHATEVER 🙄fridge & cabinets are stocked WE GOOD 😋Dog's are getting all their goodies today🐶💙🐶❤ so, Either way snow ❄ or no snow We're good 🤪🤪

yaaaaaay hope we get over 3 feet of snow, we got everything we need. If we do get lots of snow just hope employers don't push people to take dangerous chances & go to work...💯🤍

I pity all the stray cats all the homeless animals. The humans in my county have a shelter to stay in. Animals when caught get out in a prison the euthanized for existing.

Recreation took its toll on the natural beauty of our local parks as they get ready for summer, many need volunteers to clean up and conserve.
NEW YORK CITY, NY・12 HOURS AGO
ABCNY

New York City's beaches will officially open on Saturday, with lifeguards on duty during the Memorial Day weekend's unofficial kickoff to summer.
7 HOURS AGO
ABCNY

West Islip Beach in West Islip and Benjamin Beach in Bay Shore were both found to have excess bacteria in the water.
NEW YORK CITY, NY・7 HOURS AGO
ABCNY

With the unofficial start to summer at hand, officials and business owners across New York City are hoping for a post-pandemic revival that could kick off this Memorial Day holiday weekend.
NEW YORK CITY, NY・14 HOURS AGO

The Jersey Shore is gearing up for summer, and businesses are hoping for a strong kickoff to the season this Memorial Day weekend.
ATLANTIC CITY, NJ・13 HOURS AGO
ABCNY

Due to the poor weather conditions, the practice for the Bethpage Air Show at Jones Beach was canceled Friday.
BETHPAGE, NY・8 HOURS AGO
ABCNY

NYC offices could be half-filled by September, business group says

Multiple ships and more than 3,000 sailors will visit the five boroughs between May 25 and May 31.
NEW YORK CITY, NY・2 DAYS AGO

Nassau County is increasing waterway patrols ahead of the busy Memorial Day holiday weekend and urging boaters to refrain from drinking and driving.
NASSAU COUNTY, NY・2 DAYS AGO
ABCNY

New Jersey may be known for its beaches and boardwalks, but the Garden State has much more to offer in terms of water activities, and officials on Tuesday launched their inaugural Kicking Off Summer Lakes Tour.
LIFESTYLE・3 DAYS AGO
ABCNY

A summit was held in Mount Eden on Friday to discuss how New York City deals with cases of missing women and girls of color.
BRONX, NY・14 HOURS AGO
ABCNY

The City is working to build a massive 2,200-acre park on the land in phases, starting with projects adjacent to surrounding communities.
NEW YORK CITY, NY・3 DAYS AGO

Heat Advisory issued ahead of possible record-breaking temperatures this weekend

A heat advisory is also in effect for much of the Tri-State area, with potentially record-breaking temperatures on Saturday and Sunday.
NEW YORK CITY, NY・6 DAYS AGO
ABCNY

Animal Control rescued 16 German shepherds and three Dobermans from what officials called the dilapidated basement of a once shining mansion in New Jersey Tuesday.
PATERSON, NJ・1 DAY AGO
ABCNY

The exhibit was organized by the Center for Educational Innovation as part of its Benchmarks program which empowers children to have a voice and display those ideas in a public setting.
NEW YORK CITY, NY・1 DAY AGO
ABCNY

After shootings, Hochul looks at raising age for guns in New York

"I don't want 18-year-olds to have guns, at least not in the state of New York," Hochul said at a press briefing Wednesday. New York state law already sets the age limit for buying handguns at 21.
NEW YORK CITY, NY・2 DAYS AGO

Suffolk County police say the 16-year-old boy posted on Instagram that he was going to shoot up Bellport High School in Brookhaven.
SUFFOLK COUNTY, NY・13 HOURS AGO
ABCNY

Mayor Eric Adams along with the NYPD and Schools Chancellor David Banks held a briefing on public safety in the wake of the massacre at an elementary school in Texas.
NEW YORK CITY, NY・2 DAYS AGO