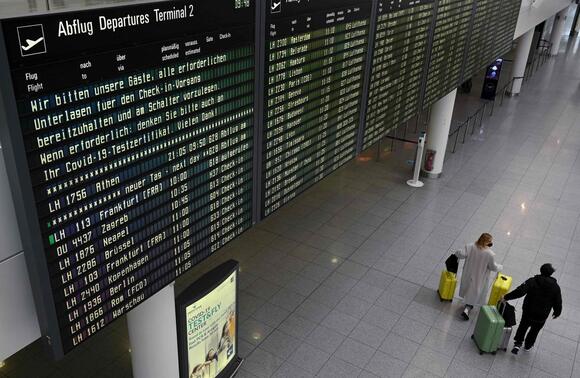 European stocks climbed Wednesday, tracking gains for U.S. equity futures as investors on both sides of the Atlantic waited for the outcome of a Federal Reserve meeting.

U.S. stocks were poised for a rally, led by the Nasdaq Composite, which Nasdaq Composite fell into correction territory last month — falling 10% from its November all-time high.

European equities have tracked roller coaster action seen recently on Wall Street that has had global ramifications. Driving the wild swings are concerns over a bumpy start to earnings reporting season, geopolitical tensions over Ukraine and ongoing COVID-19 issues, and chiefly apprehension around the potential for rising U.S. interest rates.

A two-day Federal Reserve meeting concludes on Wednesday, and while no tightening is expected, investors will be watching a news conference with Federal Reserve Chairman Jerome Powell closely for comments.

Opinion: Here are the many reasons why the Federal Reserve won’t raise interest rates as much as expected

“The consensus going into tonight’s FOMC meeting is that financial conditions, including the steep correction in US equity markets, have now tightened sufficiently for the Fed to ease up on its hawkish guidance after a long string of hawkish surprises in recent months,” said Peter Garnry, head of equity strategy at Saxo Bank, in a note to clients.

“Market expectations for the Fed funds rate by the end of this year have fallen about 10 basis points from the peak last week, so the market will need some evidence in today’s monetary policy statement and the Fed Chair Powell’s press conference that the Fed recognizes the impact it is having on markets and financial conditions,” said Garnry.

European investors will get a first chance to react to the Fed meeting’s outcome on Thursday morning.

Among the best-performing shares, banks were climbing, with heavily-weighted HSBC

(HSBC) (UK:HSBA) climbing more than 2% and Banco Santander (ES:SAN) (SAN) and Lloyds Banking Group (UK:LLOY) up over 3% each.

Energy names rose alongside oil prices (CL00) (BRN00) which pushed back owards a seven-year high amid ongoing fears of a potential Russian attack on Ukraine.

Travel and tourism related stocks were also getting a solid boost on Wednesday, with shares of International Consolidated Airlines (UK:IAG) up more than 7% and InterContinental Hotels (IHG) (UK:IHG) up more than 3%, and TUI (XE:TUI1) (UK:TUI) up more than 5%. Wizz Air shares rose over 2% after the cut-rate airline said it would experience more losses ahead of a recovery driven by U.K. demand.

U.S. stocks tumbled sharply Tuesday, resuming a selloff and sending the S&P 500 back toward bear-market territory after an earnings warning from Snapchat parent Snap triggered losses across the internet sector. How are stocks trading?. The Dow Jones Industrial Average. DJIA,. -0.89%. dropped 409 points, or 1.3%, to 31,471. The...
STOCKS・13 HOURS AGO
MarketWatch

U.S. inflation in April plunged to an annualized rate of 4.1% — less than half of where it stood in the prior month. This will no doubt come as a surprise for those of you who focus only on the financial headlines. They informed us that the Consumer Price Index dipped slightly in April, to 8.3% from 8.5%. This modest decline was less than what Wall Street had been expecting, and on the day it was reported the S&P 500.
BUSINESS・10 HOURS AGO
MarketWatch

Amy Faust Liggayu, 32, a market-research project manager based in Tinley Park, Ill., and mother of a 7-month-old son, never imagined she would have a life where she could spend five days a week with him while also working full time. But that was before March 2020, when the COVID-19 pandemic forced offices across the country to tell their employees to work from home.
TINLEY PARK, IL・1 DAY AGO
Reuters

Silk Road founder Ross Ulbricht is forfeiting billions of dollars worth of Bitcoin (BTC) and other crypto assets to the US government. According to a new court filing, Ulbricht will relinquish any claim to over 69,000 BTC and undisclosed amounts of Bitcoin Gold (BTG), Bitcoin SV (BSV) and Bitcoin Cash (BCH) worth a combined $3 billion as part of a settlement.
PUBLIC SAFETY・29 DAYS AGO
Business Insider

"The West made the fatal mistake of becoming reliant on Russian energy supplies," Mikhail Khodorkovsky said. "The West has to pay for its mistakes."
ENERGY INDUSTRY・29 DAYS AGO
Business Insider

Sign up for the Fortune Features email list so you don’t miss our biggest features, exclusive interviews, and investigations. U.S. tariffs on Chinese imports survived a change in administration, but the trade-war-era levies may not survive record inflation. “We’re certainly looking at where we see costs being raised and,...
PRESIDENTIAL ELECTION・28 DAYS AGO

International order will be thrown out the window if Russia is able to escape consequences over its invasion of Ukraine, US Gen. Mark Milley told CNN.
POLITICS・28 DAYS AGO
electrek.co

As part of a lawsuit between shareholders and Elon Musk regarding his “funding secured” tweet, new text messages and emails between Musk and people involved have been released. The communications pretty much confirmed how most people saw the situation: Elon Musk took a meeting with the head of...
BUSINESS・29 DAYS AGO
US News and World Report

WASHINGTON (Reuters) - The United States on Tuesday offered a reward of up to $10 million for information on six people it described as Russian military intelligence officers who had conducted cyber attacks affecting critical U.S. infrastructure. The six officers work in a cyber-focused unit of Russia's Main Intelligence Directorate...
PUBLIC SAFETY・27 DAYS AGO
Markets Insider

Indonesia accounts for about half of the world's supply of palm oil — the world's most widely used vegetable oil.
INDUSTRY・29 DAYS AGO

The former F-35 test pilot Billie Flynn told The Aviationist that moving to the "cosmic spaceship" that is the F-35 was too much to ask of MiG pilots.
AEROSPACE & DEFENSE・28 DAYS AGO
ohmymag.co.uk

Blackout and crisis preparedness expert Herbert Saurugg has recently warned against the complete power grid blackout that could plunge entire Europe into darkness. He predicts a widespread blackout could be lurking in the not too distant future and such an event can cause extremely chaotic conditions worldwide. However, those who are prepared for an emergency can definitely bridge the difficult days well.
ENERGY INDUSTRY・29 DAYS AGO
Business Insider

"No one wants to see the outbreak of a third world war," Chinese Foreign Ministry spokesman Wang Wenbin told reporters during a briefing.
CHINA・28 DAYS AGO
MarketWatch

SEOUL –Samsung Group said Tuesday that it would invest about $356 billion over the next five years in its semiconductor and biopharmaceuticals businesses, as well as other next-generation technologies, where global competition is intensifying. The plan extends and increases a decision to invest $190 billion through 2024, announced in...
BUSINESS・16 HOURS AGO
MarketWatch

Greencore Group PLC GNC, +4.47% reported on Tuesday a swing to a pretax profit for the first half of fiscal 2022, and said that its current second half performance is positive. The London-listed convenience-food manufacturer posted a pretax profit for the 26 weeks ended March 25 of 1.0 million pounds...
FINANCIAL REPORTS・14 HOURS AGO