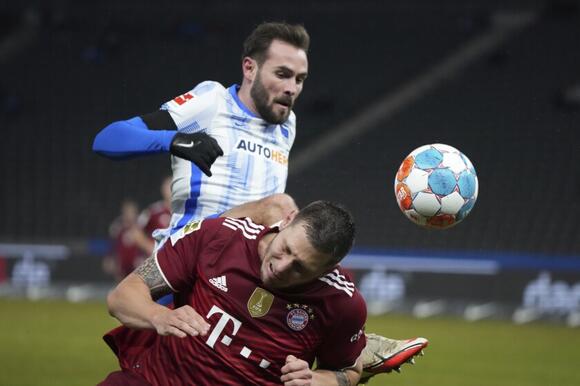 Germany defender Niklas Süle is leaving Bayern Munich at the end of the season.

Bayern chairman Oliver Kahn said Wednesday that the 26-year-old Süle is not extending his current contract.

“It took a long time and we made him an offer. He didn’t accept that offer,” Kahn said.

Süle switched to Bayern from Hoffenheim in 2017 for around 20 million euros ($22.5 million) and has since made 158 appearances across all competitions for the Bavarian powerhouse. He won four Bundesliga titles, two German Cup titles and the 2020 Champions League with Bayern, though he missed much of the triple-winning season with a cruciate ligament injury.

Kicker magazine reported that Bayern’s latest five-year offer to the player was performance-based and reflected caution over his two serious knee injuries.

Süle previously made 117 appearances over 7½ years for Hoffenheim.

Bayern is looking for alternatives, though Kahn also referred to squad members Lucas Hernández or Benjamin Pavard, who can play in the center.

“There are many possibilities, but of course Bayern must consider players who someone leaves us,” Kahn said.

Chelsea defenders Antonio Rüdiger and Andreas Christensen have been linked with the Bavarian club. Both players’ contracts are also up at the end of the season meaning Bayern or any other club would not need to pay a transfer fee to Chelsea for either.

Arsenal vs Everton prediction: How will Premier League fixture play out today?

Arsenal must beat Everton and hope Tottenham collapse at Norwich if they are to nab fourth place from their rivals on the final day of the Premier League season.Barring a dramatic late twist, Spurs look set to claim the final Champions League qualification spot and will do so if they avoid defeat at relegated Norwich at Carrow Road.If Antonio Conte’s side were to lose, Arsenal must win at the Emirates in order to take advantage, as they host an Everton side who secured their Premier League survival on Thursday.Frank Lampard’s side performed a stunning comeback to beat Crystal Palace at...
PREMIER LEAGUE・44 MINUTES AGO
The Independent

Chelsea play out the Premier League season at home to Watford at Stamford Bridge. The Blues picked up a point against Leicester midweek, thanks to Marcos Alonso’s goal, which all but guarantees third place for Thomas Tuchel’s side. The Hornets, already relegated under Roy Hodgson, will be looking for some momentum ahead of a return to the Championship next season. With new ownership imminent at Chelsea, Tuchel may opt to offer minutes to young players as he prepares to refresh his squad this summer in an effort to narrow the significant gap to Liverpool and Manchester City. Here is everything...
PREMIER LEAGUE・44 MINUTES AGO
The Independent

Is Liverpool vs Wolves on TV today? Kick-off time, channel and how to watch Premier League fixture

The final day of the Premier League season still has a title fight to conclude, as well as Champions League spots and the final relegation place to decide.Liverpool know they have to win and hope Aston Villa do them a favour against Man City, but it isn’t likely to be easy against Wolves even though they are out of form.It’s six without victory now for Bruno Lage’s side, though they made it very tough for the Reds at Molineux and it took an injury-time winner to separate the teams.Jurgen Klopp and his squad are off to the Champions League final...
PREMIER LEAGUE・44 MINUTES AGO
The Independent

In order to understand some of the rationale behind Kylian Mbappe’s stunning announcement that he will stay at PSG, you only have to consider where he’s been for the last week. That was in Qatar with Paris Saint-Germain, where he was given the hard sell. It was obviously persuasive. It is how the situation went from an “imminent” move to Madrid on Monday to Mbappe Whatsapping Florentino Perez his decision on Saturday.This is the sort of influence a state can bring to bear. There’s then the money a state can bring to bear.PSG have been insisting that their offer to...
UEFA・53 MINUTES AGO