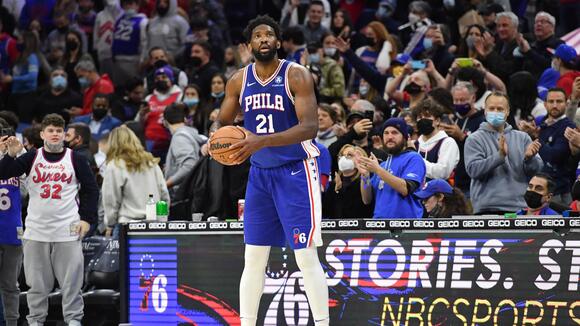 Joel Embiid is on one of those rare stretches in sports where he cannot be stopped and every night he is out-doing himself. We haven't seen anything like this in Philadelphia since Allen Iverson during his prime.

Furthermore, over his last four games, Embiid has scored 170 total points and grabbed 51 rebounds. Since the 1976-77 merger, the only other players to post 170+ points and 50+ rebounds in four games are Russell Westbrook and Moses Malone (twice).

Look at these numbers!

Since the merger, Embiid is just the fourth player with a 35-point, 10-rebound four-game streak. Shaquille O'Neal and Anthony Davis also did it four games in a row and Karl Malone did it five straight games in 1987-88, per ESPN stats .

As for the 76ers, they are now 28-19 and 7-3 in their last 10 games. Up next, they host LeBron James and the Los Angeles Lakers tomorrow night on national TV.

LeBron James has taken to social media to react to the Los Angeles Lakers' head coaching hire. According to multiple reports - which appear to have been confirmed by the Lakers star - the Western Conference franchise is hiring Milwaukee Bucks assistant coach Darvin Ham. LeBron has a three-word reaction...
LOS ANGELES, CA・14 HOURS AGO
Audacy

The Celtics had the Heat right where they wanted them in Game 6. Then Jimmy Butler happened, forcing Game 7 with a performance reminiscent of LeBron James in 2012.
BOSTON, MA・26 MINUTES AGO