Cade Cunningham was worth the wait: 'Detroit's really got a star' 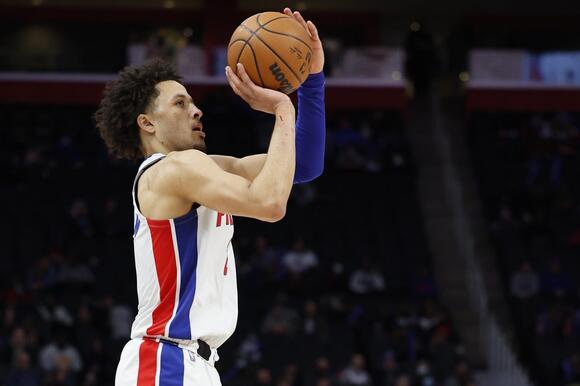 In the first quarter of the Pistons' loss to the Nuggets Tuesday night, the first overall pick shook the reigning MVP with a crossover and nailed a step-back three. By the end of the night, Cade Cunningham had joined the company of Michael Jordan -- and entered a club all to himself.

This is the star Detroit's been waiting for. This was his future flashing across the sky. "After dreaming of it for so long," said Cunningham, this was the night it all became real.

"I’ve imagined these moments so much that I don’t feel out of place," he said. "Nothing feels fake."

In his best game as a pro, Cunningham scored a career-high 34 points to go along with eight assists, eight rebounds and four blocks. The only other rookie in NBA history to reach those numbers in a single game is MJ. If we add in Cunningham's two steals and six three-pointers, the 20-year-old just had a game unlike any the league has ever seen.

Think about all the freakish athletes who have come through the NBA. Think about all their special gifts. Heck, think about the reigning MVP. More than 4,500 players have graced the league over its 75-year history. On Tuesday, Cunningham stood alone.

Nuggets coach Michael Malone knows a special player when he sees one. He arrived in Denver the same year Nikola Jokic arrived from Serbia. Six years later, The Joker is gunning for his second MVP in a row. Cunningham is a different player by trade, but he boasts the same versatile game. Cade is cunning. With long limbs and a smooth handle, he can break you down from anywhere on the floor, including from the wing where he put Jokic on skates in the first quarter.

"You have to have a guy like that who can go get his own shot, no matter who is on him," said Casey.

That was just the start. Cunningham ramped it up in the second half in a back-and-forth battle with Jokic and nearly dragged Detroit to a win. At one point in the third quarter, with the game slipping away from the Pistons, Cunningham denied high-flying Aaron Gordon with a chase-down block and then drilled a three at the other end. It triggered a 14-5 run for the Pistons, who got it as close to three before losing by five.

Denver has its franchise player in Jokic. We have ours in Cunningham.

"What a player," said Malone. "He showed again tonight how special he's going to be in this league. Detroit's really got a star there."

Cunningham didn't just score a career high on Tuesday. He did it, somehow, without ever getting to the line. How's this for standing alone? Cunningham became the first NBA player this season to put up at least 34 points and eight assists while taking zero free throws. Not that he didn't deserve them. He did. He got hit again and again as he attacked the rim, but the officials looked the other way. His career high could've and probably should've exceeded 40.

"I feel for him because he's going in there getting hit and he's not getting those calls," said Casey, who encouraged Cunningham to be more vocal with the officials.

Asked how he can get the free throws he deserves, Cunningham said, "Maybe use my voice more, yell. Maybe we need to win more to get respect."

He's probably right. Winning teams tend to get the benefit of the doubt. But even on a losing team, Cunningham is gaining respect around the NBA. The Pistons have a star on their hands, and a future in sight. The wait was worth it.

If the draft were tomorrow , Sharpe would almost certainly be a top-10 pick. He’s widely considered one of the five to seven best players on the board.
DETROIT, MI・2 DAYS AGO
97.1 The Ticket

A versatile outfielder, he was clobbering the ball this season for the Padres’ Triple-A affiliate, posting nine homers and an OPS of 1.244 in 16 games.
DETROIT, MI・1 DAY AGO