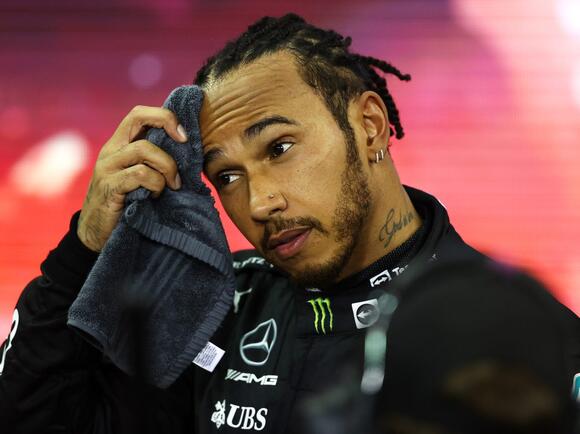 Lewis Hamilton's silence on his Formula One future is "all for show" and he will return to the race this season.

That's according to an unnamed F1 insider, who told The Telegraph that Hamilton simply couldn't walk away from the sport with just two months until the new season because it would "fuck" his team.

Hamilton was denied a record eighth driver's championship at the final race of the last season in Abu Dhabi under highly contentious circumstances involving a safety car.

With the Mercedes driver leading on the final lap, race director Michael Masi made the unusual call to allow only the five cars between Hamilton and second placed Max Verstappen to overtake the safety car, setting up a final-lap shootout between the two drivers.

Verstappen, who was on fresher tires, then overtook Hamilton to win the race and the driver's championship.

Hamilton said over the radio as the events transpired that he felt the race had been "manipulated" to allow Verstappen to win, while afterwards he said: "We'll see about next season."

Since that race he has not spoken publicly on his F1 future, leading to suggestions, including from Mercedes team principal Toto Wolff, that he could retire.

The Telegraph's source, however, said that won't be the case.

"It's all part of the drama," they told The Telegraph. "The truth is Lewis is going to have a super competitive car this year and he's got 50 million reasons for staying."

In July 2021, Hamilton signed a new two-year contract with Mercedes worth around $54 million per year.

"Anyway, if he was going to retire he'd have said it by now wouldn't he?

"Otherwise he's just going to fuck the team because they've got no options."

In the days following last season's dramatic finale, the FIA announced it was opening an investigation into the events.

In a statement shared on January 13, the organization revealed the investigation was now fully under way and outlined its next steps.

"Following the decision to the World Motor Sport Council in Paris on 15 December 2021, the FIA administration, under the leadership of Mohammed Ben Sulayem, has started the detailed analysis of the events of the last Formula 1 Abu Dhabi Grand Prix," the statement read.

"The FIA president launched a consultation with all F1 teams on various issues, including this one."

On January 19, an item on the agenda of the Sporting Advisory Committee will be dedicated to the use of the Safety Car.

"The following stage will be a shared discussion with all F1 drivers.

"The outcome of the detailed analysis will be presented to the F1 Commission in February and final decisions will be announced at the World Motor Sport Council in Bahrain on 18 March."

The former F1 driver Karun Chandhok and Sky Sports pundit told The Telegraph he believes Hamilton is waiting for the outcome of the investigation before he speaks publicly on the events in Abu Dhabi, but that he definitely won't retire.

"I think they need to demonstrate to Lewis that Abu Dhabi wasn't some form of pre-meditated plan to rob him of the title," he said.

"It's frustrating they have taken so long and also been silent. It should be simple. There was a four-minute window between when the first instruction that 'no lapped cars will be let passed' and when the select five cars were let through. What were the conversations that Masi had at that time and what led him to make those decisions?

"But do I think he's actually going to quit? No. I'm sure he's still very upset – understandably so. But ultimately Lewis loves driving race cars and winning.

"He's still at the peak of his ability and earning power."

The Formula One 2022 season begins in Bahrain on March 20.

Of course it's all part of the drama! There's probably no bigger "Drama Queen" in all of sports than Sir Lewis! He is no doubt the biggest "Diva" in F1 and makes Divas from other sports like Lebron James look like amateurs!

They admitted that it was scary when the other one was driving.
MOTORSPORTS・17 HOURS AGO