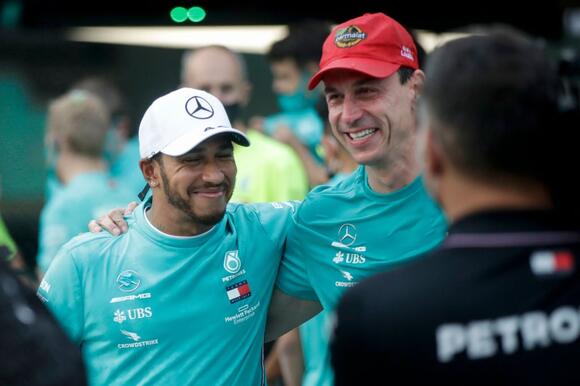 Former F1 champion Jacques Villeneuve believes the lack of public message from Lewis Hamilton since the end of the 2021 season underlines a desire from the British racer to “distance” himself from his team boss, the outspoken Toto Wolff .

A thrilling but highly controversial final lap in the Abu Dhabi Grand Prix saw Hamilton pipped to victory, in the race and the championship, by Red Bull’s Max Verstappen.

Mercedes chief Wolff was unreserved in his post-race opinions, initially instigating an appeal against the result - later dropped - and continually claiming the outcome was as a result of a wrong call by race director Michael Masi, who allowed only the cars between the two title rivals to unlap rather than the entire field - which would have seen Hamilton almost certainly finish ahead.

The seven-time champion has been out of the public eye since then other than to receive a knighthood at the end of the calendar year.

Villeneuve says that in his eyes, it’s a focus from Hamilton at what might come beyond his Formula One career, not wanting to be seen as a negative personality in defeat.

“I interpret Hamilton’s silence as him wanting to put some distance between himself and Toto Wolff,” he told Gazzetta dello Sport.

“You can lose with style, whereas Toto behaved like someone who is playing Monopoly. The moment he is losing, he throws the whole board into the air. In doing so, Wolff suffered a lot of image damage, in my opinion.

“Hamilton is sensitive to that because he is thinking about his future in America, maybe even in Hollywood.”

As for returning for the 2022 season, the Canadian former champion with Williams says it might come down to how hard Hamilton needs to work to achieve success under the new rules and with a new car - and appeared to suggest the Brit had wanted an easy ride to glory.

“It depends on the car that Mercedes will give Hamilton, whether he can win easily with it or not.

“Lewis is also a bit more tired, he has had easy seasons after Nico Rosberg’s departure and he really won’t want to have another year like he experienced last season.

“He thought he could easily bring in the record eighth title and that didn’t happen. It’s like a diamond that you have in your hands and then suddenly it’s taken out of your hands. In this way it hurt much more than if Verstappen would have simply led the whole race.”

Still crying 😢, get over it Lord Lewis for the love of God . Get in your car and Race or mossy Along with your life .

Eddie Jones will make dispelling England’s Six Nations hangover one of his priorities when his training squad gather to begin preparations for the summer.London Irish’s 19-year-old sensation Henry Arundell is among 10 uncapped players chosen in a 36-man squad who will meet in the capital for a three-day camp beginning on Sunday.Owen Farrell and Manu Tuilagi have also been included after missing the entire Six Nations because of respective ankle and hamstring injuries, although a number of other senior players have been rested on this occasion.England face the Barbarians on June 19 before embarking on a three-Test tour of Australia...
RUGBY・6 HOURS AGO
The Independent

New Zealand batter Henry Nicholls believes his former captain Brendon McCullum will prove a “massive asset” to England when he begins work as Test head coach this summer.Nicholls made his Test and one-day debuts towards the end of McCullum’s transformative reign as Black Caps skipper and has first hand experience of the charisma and passion he brings to a dressing room.McCullum’s decision to align with England means the pair will be on opposite sides of the fence in next month’s three-match series, but that did not stop Nicholls offering a ringing endorsement of his former team-mate.“It’s obviously exciting news for...
SPORTS・6 HOURS AGO