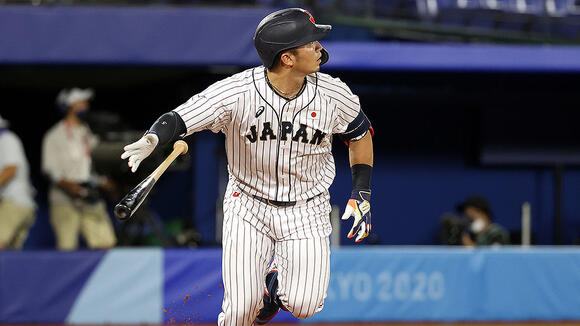 BOSTON (CBS) — Like the rest of Major League Baseball, the Red Sox are in a holding pattern as the league and the MLBPA try to end the current lockout. But when the lockout does end, the Red Sox may make a huge free agent splash.

The Red Sox are the favorites to sign Japanese superstar Seiya Suzuki when MLB gets back up and running, according to a report from Yahoo Japan . There is a conflicting report by Nikkan Sports , however, that says that Suzuki has narrowed his list of teams down to three or four — the Mariners, Cubs, Giants and Padres — none of which are Boston. Either way, Suzuki is expected to sign shortly after the lockout ends.

Boston was rumored to be making an aggressive push for Suzuki before the lockout, and the outfielder would certainly fill a big need on the Red Sox roster.

Suzuki hit .317 with 38 homers while driving in 88 runs over 134 games for the Hiroshima Toyo Carp of the Nippon Professional Baseball League in 2021. The 27-year-old is a five-time All-Star and would fill the void left in the Boston outfield following the team’s offseason trade of Hunter Renfroe to the Milwaukee Brewers.

Suzuki won’t come cheap though. He is expected to command a five-year, $60 million deal, and whatever team signs him will have to pay his posting fee as well, which will be a percentage of his contract.

Sweeney to remain Bruins' GM, Cassidy's status to be determined

BOSTON -- Bruins general manager Don Sweeney revealed to the media on Wednesday that his contract expires before next season. Team president Cam Neely said a day later that it won't be the case for long.As for the head coach? That hasn't been decided yet.Neely met with the media for his season-ending availability and said early in the session that he would be working out a new contract with Sweeney."I started talking with Charlie and [Jeremy] Jacobs after the deadline about extending Don, so that's my plan is to do that," Neely said. "I'm gonna sit down with Don next...
BOSTON, MA・22 HOURS AGO
CBS Boston

BOSTON -- One night after Nathan Eovaldi served up five homers in the second inning against the Houston Astros, Nick Pivetta's Wednesday night began in an ominous fashion when the right-hander served up a leadoff home run to Jose Altuve to conclude a 10-pitch battle. The select few fans who had arrived at Fenway Park on time for the early start were well within their rights to let out a concerning groan.Yet what followed from Pivetta was nothing short of spectacular, as he would allow just one Astro to reach base from that point forward en route to the ultra-rare...
BOSTON, MA・1 DAY AGO
CBS Boston

What’s next for Al Horford?

BOSTON (CBS) — The Celtics got some surprising — and unpleasant — news just a few hours before Game 1 of the Eastern Conference Finals: Al Horford was not going to be available. For the third time this season, Horford has landed in the NBA’s Health & Safety Protocols. The Celtics found out that Horford would miss Game 1 around 5 p.m., roughly three-and-a-half hours before tipoff. Losing a starter ahead of the first game of the Conference Finals is not an ideal situation for any team. To make matters worse for the Celtics, Marcus Smart was also ruled out with a...
BOSTON, MA・2 DAYS AGO
CBS Boston

BOSTON (CBS) — The undermanned Celtics came out firing in Game 1 of the Eastern Conference Finals against the Heat. The Celtics of the first half looked like they may be able to steal the first game of the series, even without Al Horford and Marcus Smart. But the Celtics of the third quarter were downright dreadful. Boston came out of halftime ice cold and lethargic, and Miami stormed out with a 22-2 run to completely flip the game. The Celtics went on to lose Game 1, 118-107, in Miami. The third quarter changed everything. Miami outscored Boston 39-14 in the frame,...
BOSTON, MA・2 DAYS AGO

BOSTON (CBS) — Death, taxes and Patrice Bergeron being a Selke finalist. Those are the certainties in life. The Bruins captain was announced as a finalist for the 2022 Frank J. Selke award on Tuesday. It’s the 11th straight season that Bergeron has been a finalist for the award, which is given annually to the best defensive forward in the NHL. Bergeron is a four-time Selke winner, tied with Hall of Famer Bob Gainey of the Montreal Canadiens for the most all-time. With a win this year, Bergeron would become the first five-time Selke winner in NHL history. He’s got a pretty good chance to bring it home, too. He helped lead a Boston defense that allowed just 2.66 goals per game in 2021-22, the fourth-lowest mark in the NHL. Bergeron led the NHL with 991 faceoff wins and a 61.9 faceoff win percentage, to go along with his 25 goals and 40 assists over 73 games. He is up against Florida Panthers forward Aleksander Barkovand Calgary Flames forward Elias Lindholm for this year’s Selke. Bergeron hasn’t decided if he’ll be back for a 19th NHL season in 2022-23, but he’ll likely be a Selke finalist next year regardless. The man is that good.
BOSTON, MA・2 DAYS AGO
CBS Boston

Horford available to play in Game 2 for Celtics

BOSTON -- The injury news in the Eastern Conference finals has been all over the map for both the Boston Celtics and Miami Heat, and Game 2 hasn't even begun.The trend continued on Thursday afternoon, when starting forward Al Horford was upgraded from doubtful to questionable for Thursday night's Game 2. Not long after that upgrade, the news got better for Boston, with Horford officially being made available to play in Game 2.Horford had been in health and safety protocols since Tuesday, landing there just hours before Game 1 tipped off in Miami.Celtics head coach Ime Udoka -- who missed...
BOSTON, MA・21 HOURS AGO
CBS Boston

BOSTON (CBS) — Game 1 of the Eastern Conference Finals was going so well for the Celtics, until it wasn’t. After a solid and surprising first half from the undermanned Celtics, they were outplayed in every facet of the game in the third quarter, which ultimately cost the team any shot at stealing Game 1 against the Heat. Getting outscored by 25 points in a single quarter will do that to a team. The Celtics just had no life in the third quarter, and were outscored 39-14 by the Heat. It was Boston’s only bad quarter of the game, but boy was...
BOSTON, MA・2 DAYS AGO
CBS Boston

BSOTON -- One week after officially setting the regular-season schedule, the Patriots now officially have their preseason schedule set as well.New England announced the dates and start times of all three preseason games for the forthcoming season, with home games against the Giants and Panthers and a road date to Las Vegas to face the Raiders.The dates and times of each game are below:vs. New York Giants, Thursday, Aug. 11, 7 p.m., Gillette Stadiumvs. Carolina Panthers, Friday, Aug. 19, 7 p.m., Gillette Stadiumat Las Vegas Raiders, Friday, Aug. 26, 8:15 p.m.The Patriots will also be holding joint practice sessions with the Raiders prior to that preseason finale, according to a report. Those two teams will also play against each other in the regular season, with a Sunday Night Football matchup scheduled for Week 15.The Patriots will also hold joint practices with the Panthers prior to that preseason game, according to another report.The Patriots' regular season begins on Sept. 11, with a road game in Miami.All three preseason games will air on WBZ-TV.
FOXBOROUGH, MA・19 HOURS AGO