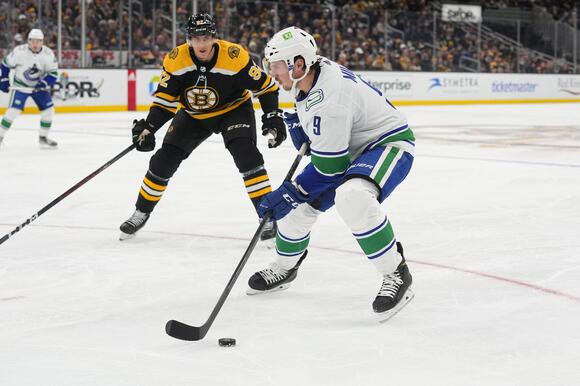 So far, the Bruins have been happy with the way Erik Haula has played on the second line centering Taylor Hall and David Pastrnak.

It’s easy to see why. After all three of those players got off to slow starts this season relative to expectations, they’ve all taken off since being put together at the start of this month.

So, the Bruins’ second-line center problem is solved, right? Well… we’ll see. Haula has been playing well and seems to be clicking with his high-flying wings, no doubt. But before this year, he produced like a true top-six forward just once in his eight NHL seasons, back in 2017-18 with Vegas when he was on a line with James Neal and David Perron. The rest of his career, he has produced more like a third-liner.

It’s possible Haula continues to play well enough to give the Bruins what they need from a second-line center. It’s also possible he cools off and the Bruins find themselves searching for an upgrade once again. They already tried Charlie Coyle there, but he’s a better fit on the third line. Jack Studnicka isn’t ready for that big of a role right now, and it’s probably asking too much to think he would be in another month or two.

The tenuous nature of the situation was illustrated Monday night, when Bruce Cassidy felt the need to move Tomas Nosek up to the second line in Haula’s place for a good chunk of the second period as part of a larger attempt to try to spark a sleepy team. While it worked to an extent, with Nosek setting up Pastrnak for a goal, that’s not a road you want to go down too often.

If the Bruins decide that adding a true second-line center is their priority before the March 21 trade deadline, they could have some options. They won’t be easy or cheap, but impact players rarely are. Let’s take a look at five of them.

Might as well start with the elephant in the room. Krejci returning to the Bruins this season still isn’t completely impossible, but it seems as unlikely now as it has since he committed to playing back home in the Czech Republic over the summer.

Krejci would need to clear waivers to return to Boston at this point. It’s possible that other teams, knowing he’ll only play for the Bruins, let him pass and decide not to risk poisoning the water or violating some gentleman’s code. It seems more likely another team would claim him anyways, because letting the Bruins add a No. 2 center without a challenge would be worse than souring a relationship.

The idea that the Bruins could work out a handshake deal with a team near the top of the waiver order to have them claim Krejci and then trade him to Boston doesn’t hold up either. Krejci would still have to clear waivers before being traded, as the NHL has already covered that potential loophole.

And all that assumes Krejci even has any interest in returning in the first place, which he might not. Krejci is committed to HC Olomouc through the end of their season, which may not even be over before the trade deadline anyways depending on how far they go in the playoffs. Krejci would not be eligible for the NHL playoffs if he signs after the trade deadline has passed. Even if Olomouc’s season ends early, Krejci may very well decide that the Czech season -- plus the Olympics -- was enough hockey for the year.

So yeah, Krejci returning would be perfect for the Bruins. Unfortunately for them, it still seems highly unlikely, which means they’ll probably have to turn to the trade market. Speaking of which…

Here’s one potential trade target the Bruins have already been connected to. On Monday, Daily Faceoff’s Frank Seravalli named the Bruins as one of the teams interested in acquiring Miller from Vancouver, along with the New York Rangers, Minnesota Wild and Calgary Flames.

If Miller truly is available, we would expect that list to grow. He’s 28, he’s a point-per-game player over the last three years (including 40 points in 40 games this season), and he’s signed to an affordable contract ($5.25 million cap hit) through next season.

On paper, Miller would seem to be a good fit with players like Hall and Pastrnak. He’s more of a passer than a shooter, he has the speed to keep up with them, and at 6-foot-1, 218 pounds, he would add some physicality to that line. He’s also a staple on Vancouver’s power play and penalty kill.

He will not come cheap, though. Given that he’s in his prime and not just a rental, the starting point for any potential package would probably be a first-round pick and/or a top prospect.

Speaking of expensive, Hertl may be the best rental on the market, assuming the Sharks don’t end up signing him to an extension first.

Hertl checks some of the same boxes as Miller -- plays in all situations, good size (6-foot-2, 215 pounds), also 28 years old, and the exact same number of points per game for his career. A little less physicality, but better defense and a little more goal-scoring touch. In fact, Hertl’s 21 goals in 42 games this season put him on the best goal-scoring pace of his career.

Like Miller, Hertl should have enough good years left that the Bruins could potentially sign him to an extension to help secure their center position as Patrice Bergeron’s career winds down. Pastrnak would probably be happy about having another Czech center, too.

Also like Miller, though, Hertl is going to cost at least one and possibly two premium assets, despite being a free agent after the season.

Would the Flyers really trade a franchise legend to the Bruins? A decade ago, when these two teams had a postseason rivalry going, it would have been unthinkable. But the Bruins-Flyers rivalry has certainly cooled down in recent years, to the point where you could debate whether it even qualifies as a rivalry right now.

Giroux, now 34 years old and now second on Philadelphia’s career points list, is still seeking a Stanley Cup. He’s in the final year of his contract. The Flyers lost their 13th straight game on Tuesday and are going nowhere fast. Sportsnet’s Elliotte Friedman recently predicted that Giroux ends up getting traded.

Unlike Miller or Hertl, there would be no longer-term outlook if the Bruins acquired Giroux. It would be strictly a win-now move. Depending on the cost, that’s far from a dealbreaker. While the Bruins would like to address both their present and future at the center position, they’re also open to doing whatever it takes to make another run before Bergeron retires.

Giroux could help them do that. He still produces and drives play at a very high level. He has 34 points (15 goals, 19 assists) in 40 games this season after putting up 43 in 54 last season. It is worth noting that while Giroux once had excellent playoff numbers, he has struggled in his last three trips to the postseason, putting up just two goals and 10 assists in his last 28 playoff games.

At age 37, Pavelski is having the best offensive season of his career on a points-per-game basis. After a four-point game on Tuesday, he now has 48 points (19 goals, 29 assists) in 40 games.

He still drives play at an elite level and would certainly be a hot commodity… if he’s available. The Stars have turned things around over the last month and are currently riding a four-game winning streak that has lifted them into a playoff spot in the chaotic Western Conference.

Pavelski, who is in the final year of his contract, has also said he’d like to stay in Dallas. If the Stars continue to play like this, they may very well decide they’d prefer to keep him. So the Pavelski rumors may go quiet for a bit, but they could return if Dallas starts to struggle again.

It’s also worth noting that Pavelski is playing more right wing than center this season, although he did still play plenty of center last year. That wouldn’t affect overall interest in him much -- that kind of production is welcome at any position -- but for the Bruins specifically, they would need to decide if they view him as a full-time center or not.

Boston Bruins center Patrice Bergeron has been named a Selke Trophy finalist for an 11th straight season. He should easily win the award for a record fifth time.
BOSTON, MA・1 DAY AGO
WEEI Sports Radio

Jayson Tatum, Jaylen Brown have to be better, and they know it

When the Boston Celtics needed their stars to step up and stop the bleeding during a disastrous third quarter in their Game 1 loss to the Miami Heat, Jayson Tatum and Jaylen Brown made things worse. It can’t happen again, and they know it.
BOSTON, MA・1 DAY AGO
WEEI Sports Radio

Celtics built their championship team in the best way possible

The Boston Celtics built their championship team through the NBA Draft, selecting Jayson Tatum along with Jaylen Brown and the rest of their nucleus. That’s the best way to do it.
BOSTON, MA・2 DAYS AGO

Did Bam Adebayo take a shot at Jaylen Brown after Game 1?

Before the Boston Celtics went on their 2nd half run, Jaylen Brown tweeted “the energy was about to shift.” Heat center Bam Adebayo used the same language when talking about their comeback win in Game 1.
BOSTON, MA・1 DAY AGO
WEEI Sports Radio

The Boston Celtics have to look across the floor and see the control exhibited by Jimmy Butler and the rest of the Miami Heat and learn their lesson for Game 2.
BOSTON, MA・4 HOURS AGO