Tech giants like Meta Platforms (NASDAQ: FB) and Microsoft (NASDAQ: MSFT) have recently made some aggressive moves to secure their position in the developing metaverse. Meta, formerly known as Facebook, even went so far as to change its company name to reflect this new focus. Microsoft will probably keep its name, but it intends to make a sizeable acquisition that it thinks will help build a presence in this network of 3D virtual worlds focused on social connection.

These two companies built their initial businesses outside the metaverse. To know which one will better serve metaverse stock investors, we need to take a closer look at each and see what they bring to the table. 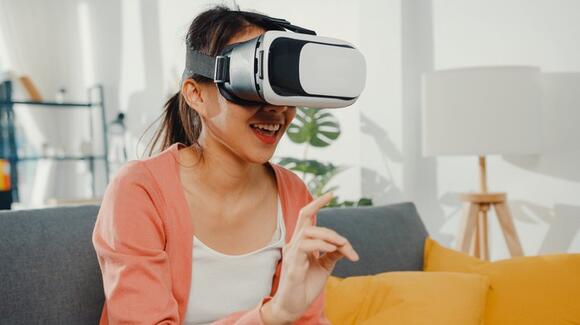 The case for Meta Platforms

Considering that the company changed its name to reflect the metaverse trend, Meta might appear to be all-in on the metaverse trend. Its focus on that niche and its Oculus Quest 2 VR headsets do demonstrate a commitment that goes far beyond a simple name change.

Meta's social media sites Facebook, WhatsApp, and Instagram have sought to draw engagement and place strategically targeted ads for an audience of 2.9 billion monthly active users. The software, virtual reality (VR) equipment, and data centers Meta needs to engage with the metaverse, along with its massive user base, create what could be a powerful combination.

However, for all of these significant changes, Meta remains primarily a social media stock. Also, despite its size and resources, it is unclear whether its metaverse applications will match the popularity of its social media sites.

Still, the company is poised to grow in 2022 if recent financials serve as an indication of the future. In the last 12 months, revenue of $112 billion grew 42% compared with the prior 12-month period. Also, trailing-12-month net income of $40 billion surged 59% versus the previous 12-month period as slower growth in expenses more than offset the increase in income taxes.

Additionally, despite a broad sell-off among tech stocks, Meta stock has risen 13% over the last 12 months, and the company's price-to-earnings (P/E) ratio of 22 is far below the only other currently profitable social media stock, Pinterest , at 58 times earnings. Hence, despite a massive size, Meta delivers considerable growth for a low multiple, increasing the likelihood of more rapid gains once tech stocks regain some investor favor.

Why investors should consider Microsoft

Compared to Meta, Microsoft made a considerable but less dramatic commitment to the metaverse. The company used some of its $131 billion in liquidity to make an all-cash purchase offer of about $69 billion for gaming giant Activision Blizzard .

As the maker of the Xbox gaming console, Microsoft has long had a presence in the gaming industry. But given the importance of gaming to the metaverse, purchasing the largest U.S.-based video game company deepens its commitment to gaming.

Microsoft also happens to be the second-largest cloud infrastructure company, according to Kinsta. Its role in the cloud and its worldwide data-center footprint should help it power these newly acquired gaming assets.

Like Meta, its current business remains prosperous. Trailing-12-month revenue of $176 billion grew 20% compared with the same period in the previous 12 months. Also, net income of $68 billion for the last 12 months rose 43% versus the previous 12-month period. A lower operating-expense increase and negligible income tax expenses in the most recent quarter contributed to the faster growth in income compared to revenue.

Additionally, amid a decline in tech stocks, Microsoft stock has risen by 32% over the last year, and at a P/E ratio of 33, it is significantly cheaper than its largest cloud competitor, Amazon , at 56 times earnings. Though not as cheap as Alphabet at a 25 P/E ratio, its valuation is reasonable considering the size of the company's earnings increases.

Both companies appear poised for prosperity and should play prominent roles in developing what eventually becomes the metaverse. Nonetheless, if I were forced to choose between the two stocks, I'd say Meta looks like the better buy. Its platform continues to generate faster revenue and income increases than Microsoft, and investors can buy that growth at a lower multiple. This gives the social media stock a considerable advantage for stockholders regardless of the role each company plays in this emerging virtual world.

A sale of a large block of shares in Rivian is hurting investor sentiment.
STOCKS・2 HOURS AGO

These passive income powerhouses, with yields ranging from 4.4% to 11.9%, can generate some serious wealth for patient investors.
STOCKS・1 DAY AGO

Las Vegas Sands, Wynn Resorts, and Caesars Entertainment all roared ahead on Friday.
STOCKS・2 DAYS AGO

These two businesses are in a great position to thrive over the next several years.
STOCKS・6 HOURS AGO
The Motley Fool

3 Warren Buffett Stocks to Buy in a Market Crash

These Buffett-backed stocks look like smart buys.
STOCKS・2 DAYS AGO
The Motley Fool

Winter is here and Coinbase is paying the price.
STOCKS・3 HOURS AGO
The Motley Fool

Got $500? These 2 Growth Stocks Are Bargain Buys During the Market Sell-Off

You don't need a trust fund to start building wealth.
STOCKS・9 HOURS AGO
The Motley Fool

They're all available for bargain prices right now.
STOCKS・7 HOURS AGO
The Motley Fool

If I Put My Money in the S&P 500, Should I Even Bother With Real Estate Investing?

Investing broadly in stocks is a good thing -- but that doesn't mean real estate shouldn't have a place in your portfolio.
MARKETS・1 DAY AGO
The Motley Fool

It pays to start putting money into real estate. These options could make you a fortune.
REAL ESTATE・1 DAY AGO