The new year has started badly for many technology stocks. Investors are looking ahead to rumored aggressive interest rate hikes by the Federal Reserve in 2022, and selling off richly valued tech names whose growth could be stunted as borrowing costs rise.

This explains why the stock prices of Microsoft (NASDAQ: MSFT) , ASML Holding (NASDAQ: ASML) , and Micron Technology (NASDAQ: MU) have lost a lot of ground this month.

However, savvy investors should treat the pullback in these three tech stocks as a buying opportunity -- each of these stocks could go parabolic thanks to their terrific growth prospects. Let's see why that may be the case. 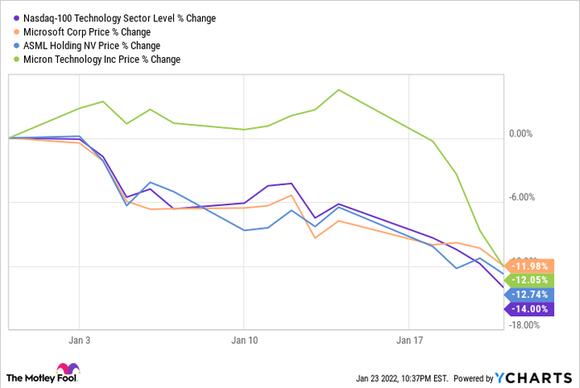 Trading at 33 times trailing earnings, investors can buy Microsoft at a relatively cheap valuation right now compared to its five-year average earnings multiple of 37. Doing so could turn out to be a smart long-term bet, as Microsoft could win big from several lucrative tech trends such as cloud computing, video gaming, and the metaverse.

Cloud computing, for instance, is one of Microsoft's key growth drivers, accounting for 37% of the company's total revenue. The tech giant's cloud revenue shot up 31% year over year in the first quarter of fiscal 2022, driven by 50% growth in Azure and other cloud services.

While Amazon's share has remained steady, Microsoft has stepped on the gas. This bodes well for Microsoft in 2022, as global public cloud revenue is expected to increase nearly 20% this year to $397.5 billion, according to Gartner . The long-term forecast is also promising, with the industry expected to grow at an annual pace of 18% through 2028, according to Fortune Business Insights. 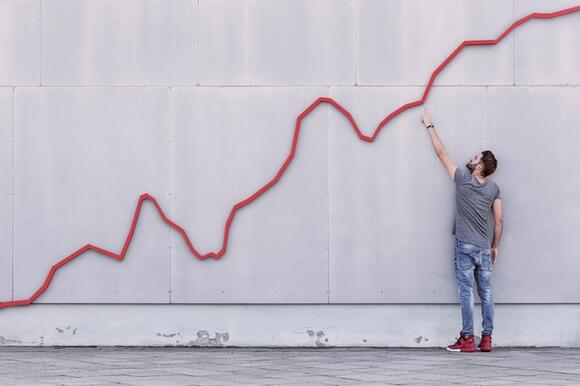 So Microsoft's cloud business is built for growth in 2022 and beyond -- and this is just one of the mouthwatering opportunities the company is sitting on. Video gaming, for instance, is going to be a key growth driver for the company this year as console sales pick up the pace.

The new Xbox Series X and Series S consoles have become Microsoft's best-selling consoles. Daniel Ahmad of Niko Partners estimates that the company has sold at least 12 million units of its latest consoles since they hit the market in November 2020, giving Sony 's PlayStation 5 a run for its money. Microsoft just announced that it is acquiring video game publishing giant Activision Blizzard for $68.7 billion, and if the deal closes, it would make Microsoft the third-largest gaming company in the world.

The acquisition would give Microsoft ammunition to further dent Sony's PS5 sales and attract more gamers onto its Xbox and PC (personal computer) platforms. Additionally, Microsoft CEO Satya Nadella says that gaming will "play a key role in the development of metaverse platforms," indicating that the company is now looking to tap into this emerging tech trend, which could give the business a big boost.

Video gaming in the metaverse is expected to hit $400 billion in revenue by 2025, according to Grayscale Investments. All this indicates that Microsoft is pulling the right strings to ensure that it remains a hot growth stock not just in 2022, but in the long run as well.

There is a global shortage of semiconductors and ASML Holding is one of the best ways to take advantage of that, as it will play a key role in improving the supply of chips. ASML supplies semiconductor fabrication equipment to major semiconductor foundries such as Taiwan Semiconductor Manufacturing , Samsung , and Intel .

As a result, the company has been enjoying terrific growth on the back of booming demand for its equipment. This is evident from ASML's results for fiscal 2021, which were released on Jan. 19. ASML's annual revenue increased 33% over the prior year to 18.6 billion euros, while net income shot up nearly 66% to 5.88 billion euros.

ASML points out that "net bookings include all system sales orders for which written authorizations have been accepted," so its revenue growth could be more than expected if it can fulfill more orders. It is worth noting that ASML's forecasted revenue growth for 2022 is higher than analysts' expectations of 17%, so it was not surprising to see the stock inch 1% higher following its report.

Additionally, recent developments indicate that ASML's prospects are getting brighter as more chipmakers place orders with the company. Intel, for instance, has placed an order for a machine that's still under development and is likely to only move into volume production in 2025.

Chipmakers are already placing orders for ASML's next-generation machines as they race each other to shrink chip sizes and achieve greater computing power and efficiency. Given that ASML is the only manufacturer of extreme ultraviolet (EUV) lithography machines, which help chipmakers manufacture advanced chips, its order book could keep getting bigger and ensure long-term growth.

Analysts expect ASML's earnings to grow at an annual pace of 30% for the next five years, which is why buying the stock on the dip looks like a good idea as it could step on the gas thanks to its solid near-term and long-term prospects.

Micron Technology is one of the best ways to play the booming demand for memory chips given its fast pace of growth and cheap valuation. Micron's revenue in the first quarter of fiscal 2022 (ending Dec. 2), shot up 33% year over year, and non-GAAP net income increased 177% to $2.16 per share.

The memory specialist expects to deliver record revenue and profits in fiscal 2022, and this has got Wall Street excited. New Street Research recently started coverage of Micron Technology stock, and the firm believes that the chipmaker is riding significant tailwinds in the memory market. The firm has a $135 price target on Micron stock, which points toward 64% upside from the closing price on Jan. 21.

New Street analyst Pierre Ferragu says that Micron is sitting on secular growth opportunities in the memory market, especially DRAM (dynamic random access memory), that could help it clock two years of robust revenue and margin growth. Not surprisingly, Micron is expected to step on the gas this year and beyond.

Analysts are anticipating 20% top-line growth and 30% bottom-line growth at Micron in fiscal 2023, which would be faster than fiscal 2022's estimated revenue growth of 16%. All this isn't surprising considering that the memory market is expected to hit a record high of $171 billion this year, up from last year's estimate of $158 billion as per third-party research.

Micron's recent dip means that investors have an opportunity to tap into this massive end market at an enticing valuation. The stock is trading at just 13 times trailing earnings, 9 times forward earnings, and 3.3 times sales. Buying Micron stock at these multiples is a no-brainer given its impressive growth rate, which seems sustainable in 2022 and beyond.

As such, Micron Technology is an ideal stock for investors looking for a value pick right now, as it could zoom higher this year thanks to the memory market's bright prospects.

3 Unstoppable Stocks That Could Soar 58% to 97%, According to Wall Street

Analysts think the downturns for these stocks should only be temporary.
STOCKS・13 DAYS AGO
FOXBusiness

When will the stock market hit bottom? Goldman says watch for this signal

The stock market has gotten obliterated in a widespread selloff this month, and equities are likely to see further losses before the Federal Reserve signals that the conclusion of monetary tightening, according to Goldman Sachs strategists. In an analyst note this week, Goldman strategist Vickie Chang said the stock selloff...
STOCKS・1 DAY AGO
The Motley Fool

A huge market, proven track record, and lowered valuation makes this one a no-brainer.
STOCKS・28 DAYS AGO

Boomers are leaving the stock market. Here’s what comes next, says this strategist.

Stocks are in the green for Thursday, with Facebook parent Meta Platforms in the driver’s seat after less disastrous than feared results. Gains are a bit less than what stock futures were promising though. With earnings, inflation, a COVID-19 resurgence and war all in the balance, any gained ground...
STOCKS・27 DAYS AGO
The Motley Fool

3 Buffett Stocks That Are Screaming Buys in May

These top stocks are not done hitting new highs over the long haul.
STOCKS・19 DAYS AGO
The Motley Fool

It may not be as scary as homeowners expect.
REAL ESTATE・6 DAYS AGO

E-commerce has fallen out of favor with some investors but the long-term opportunity is undeniable.
STOCKS・3 DAYS AGO
The Motley Fool

Deere stock has come down in price, and there are some headwinds worth monitoring.
STOCKS・21 HOURS AGO
The Motley Fool

Tech stocks have been crushed in 2022, but opportunities are beginning to present themselves.
STOCKS・8 DAYS AGO
money.com

What the Stock Market Selloff Means for Your 401(k)

Ideally, you're not checking your 401(k) balance every few hours. But if you're alarmed by how your retirement savings are faring in today's stock market, you're not alone. You might even be wondering if it's time to change your investing strategy. Financial markets have suffered a major selloff in recent...
STOCKS・2 DAYS AGO

Some of the stocks that may grab investor focus today are:. Wall Street expects Advance Auto Parts, Inc. AAP to report quarterly earnings at $3.57 per share on revenue of $3.38 billion after the closing bell. Advance Auto Parts shares fell 0.1% to $181.85 in after-hours trading. Broadcom Inc. AVGO...
STOCKS・3 DAYS AGO
The Motley Fool

Dow drops 1,100 points for its biggest decline since 2020 as the sell-off this year on Wall Street intensifies

The Dow Jones Industrial Average posted its biggest loss since 2020 on Wednesday after another major retailer warned of rising cost pressures, confirming investors’ worst fears over rising inflation and rekindling the brutal 2022 sell-off. The Dow shed 1,164.52 points, or 3.57%, to 31,490.07, the average’s biggest decline since...
STOCKS・7 DAYS AGO
The Motley Fool

These stocks have been heavily sold off, but their long-term prospects are fantastic.
STOCKS・8 DAYS AGO
The Motley Fool

Successful fund managers are piling into these four time-tested companies.
STOCKS・3 DAYS AGO
The Motley Fool

Two of the legendary investor's recent purchases especially stand out.
STOCKS・1 DAY AGO