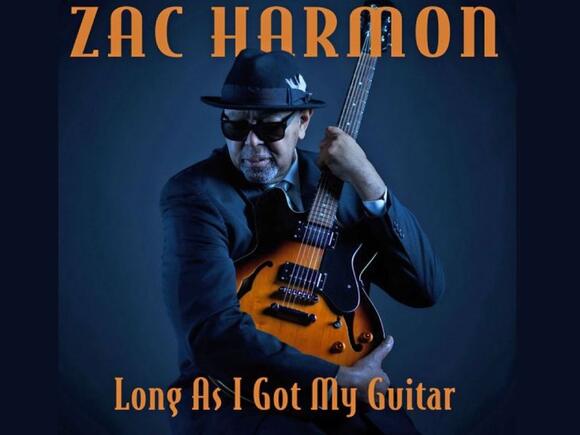 As Long As I Got My Guitar

Suffice it to say that when you’ve produced hits by legends such as Stevie Ray Vaughan and Carlos Santana, you don’t need to waste your time on any ordinary guitarist.

Grammy-winning producer Jim Gaines, who also has produced pop acts such as Huey Lewis and the News, sees something special in Texas-based bluesman Zac Harmon and that’s great for us, the listeners.

Harmon can be as wicked and nimble on the fretboard as anyone. But what seems more evident from this 10-song set is his ability to weave the blues with a little funk, soul, gospel, reggae, and other genres into a sound that’s familiar and comfortable, yet fresh.

The 10 songs on this disc were written by Harmon and Catfood Records owner Bob Trenchard, canvassing familiar blues themes of love and heartache, along with hope and inspiration. His title track is a barn burner. Upbeat songs include “Soul Land” and “Love for You Baby,” while numbers such as “People Been Talking” and “Waiting to Be Free” show real grit.

On a personal note, I found the Zydeco influence from Dan Ferguson’s accordion on “Crying Shame” to be a pleasant surprise that gave the disc a little extra dimension.

As Long As I Got My Guitar is a strong follow-up to Harmon’s critically acclaimed 2019 album, Mississippi BarBQ. One of the better descriptions of him comes from blues journalist Don Wilcock who summed him up like this: “Bobby Blue Bland uptown sophistication with a touch of Freddie King guitar.”

In addition to being encouraged by the musical talents of his parents, Harmon grew up in Jackson, Miss. near a music instructor who hosted Cab Calloway, Duke Ellington, and Harry Belafonte in her home at various times. Another neighbor, Bill Farris, a former chairman of the National Endowment for the Humanities, worked with noted folklorist Alan Lomax and founded the Center for the Study of Southern Culture at the University of Mississippi.

Harmon’s released several previous albums and, as his publicist said, has toured from Memphis to Mumbai.

He said he considers Long As I Got My Guitar “the most memorable record of my career.”

Robin Roberts got emotional as she opened up about her relationship with partner Amber Laign, especially in the midst of a challenging health battle. The Good Morning America star made an appearance on The Ellen DeGeneres Show to promote her new book, Brighter By the Day. VIDEO: Robin Roberts enjoys...
CELEBRITIES・23 DAYS AGO
Outsider.com

Geroge Wendt, who played Norm on the classic TV show Cheers, decided to be like Jack when he was in public. We mean Jack Nicholson here. The famed movie actor seemingly did not mind being noticed when out among the non-Hollywood crowd. Nicholson’s attitude about this did ring a bell for Wendt during his show’s incredible run on NBC and in reruns today.
CELEBRITIES・23 DAYS AGO
ComicBook

After weeks of silence, Chris Rock has finally addressed his now-infamous incident with Will Smith at March's 94th Annual Academy Awards. During another sold-out show at Baltimore's Lyric Performing Arts Center on Friday, Rock directly referenced the slap, but only spent a second on it before moving on with his set.
BALTIMORE, MD・24 DAYS AGO
HipHopDX.com

Too $hort has worked with a score of legendary producers throughout his almost 40-year career, from Jermaine Dupri and Lil Jon to Daz Dillinger and DJ Pooh. But one big-name beatsmith he passed up the opportunity to work with was Kanye West. During a recent interview with VladTV, the Bay...
CELEBRITIES・23 DAYS AGO

Katy Perry reacted quite hilariously to a Top 11 contestant on American Idol during a unique song challenge on Monday night's episode. Each of the remaining contestants were given a song to perform by each judge - Perry, Lionel Richie and Luke Bryan - with the singer selecting one and then tasked with guessing which judge picked that song for him or her.
MUSIC・23 DAYS AGO
musictimes.com

Andrew Woolfolk, popularly known for being Earth, Wind & Fire's longtime saxophonist, has passed away at the age of 71; what was his cause of death?. Fellow bandmate Philip Bailey took to Instagram to confirm the tragic news and recalled their early years, saying they met in High School and quickly became friends and bandmates.
BILOXI, MS・22 DAYS AGO
thebrag.com

Former Van Halen bassist Michael Anthony has said that the band’s temporary vocalist Sammy Hagar was better than David Lee Roth and explained why. “When ‘Jump,’ which was our only big single from the early days of Van Halen, Roth didn’t even want that song on the album because he’s all, ‘Eddie, you’re a guitar god, man, you’re not supposed to be playing keyboards.’ And Eddie, he grew up classically trained. Piano, in addition to picking up guitar,” Anthony explained in a recent interview with Mitch Lafon and Jeremy White.
MUSIC・1 DAY AGO