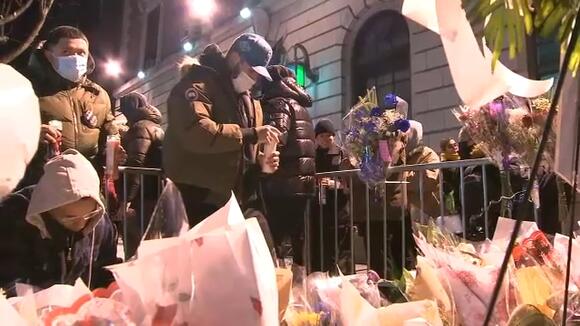 Final goodbyes are being planned as New York City prepares for the wakes and funerals honoring NYPD officers Jason Rivera and Wilbert Mora. Hundreds of people came to the 32 Precinct on Wednesday night, packing 135th Street in Harlem and standing in the cold, to share the burden for a moment, of a pain that will last a lifetime. Some left candles on the sidewalk of sorrow out front, some left flowers and others shouted their support from the rooftops. Both officers were killed in the line of duty after being ambushed in the Harlem neighborhood they patrolled. Officer Mora, 27, died Tuesday at NYU Langone Health in Kips Bay. He was transferred there Sunday from Harlem Hospital where his organs were donated to five people. Earlier Wednesday, fellow NYPD officers escorted Officer Mora's remains to a funeral home in Inwood. It was a somber procession of grief and loss. The NYPD stood at attention and NYPD choppers watched from a clear blue sky above as his body was carried to the funeral home. At Wednesday night's vigil, the department was embraced by the community but they will still need support. Many offices from the 32 Precinct who responded that night are off this week, grieving over the loss. In a final act of heroism, Mora fulfilled his wishes of being an organ donor . Officer Mora's wake and funeral are planned for next week at St. Patrick's Cathedral. 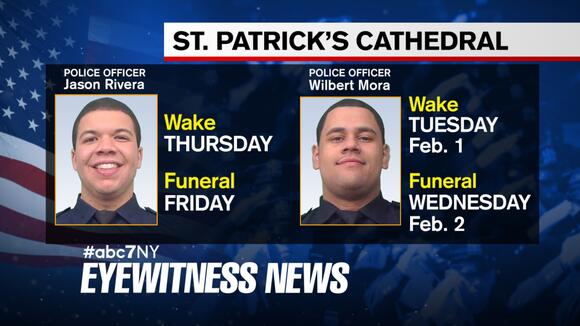 Before that, on Thursday and Friday this week , the wake and funeral for his partner, Officer Rivera, will take place at St. Patrick's. Family friend Susana Rosario said Rivera, "liked to take care of everyone." Rivera graduated from Washington Heights Expeditionary Learning School in 2017. His high school teacher Samantha Love said, "Everyone remembers his spirit and smile." Love taught Jason in 10th and 11th grades and remembers his intense desire to give back and help those in need. Meanwhile, JetBlue has announced it is providing free airfare to any members of law enforcement and public officials who are looking to attend Officer Mora's funeral next week. ALSO READ | How to help families of NYPD officers slain in line of duty

How come we haven’t seen any marches or protests for these two young, Hispanic, NYPD officers killed in the line of duty? Did their lives matter? Will there be a statue built in their honor? Or is that’s just reserved for certain elements of our society? Where are the condemnations and condolences to the families from our elected officials? My condolences to the families of NYPD Officers Jason Rivera and Wilbert Mora who made the ultimate sacrifice, to keep our streets safe and protect the communities where they grew up and built a bridge between the NYPD and our Latino communities. May They Rest In Peace together with Our Lord and Savior JesusChrist. Descansen en Paz Héroes. 💔💔😢😢🙏🙏

Police: Suspect tells teen in traditional Jewish clothing he is 'going to get rid of all you Jews'

Police say the suspect told an 18-year-old man in traditional Jewish clothing that he is 'going to get rid of all you Jews.'
BROOKLYN, NY・13 HOURS AGO
ABCNY

A summit was held in Mount Eden on Friday to discuss how New York City deals with cases of missing women and girls of color.
BRONX, NY・1 DAY AGO
ABCNY

Bicyclist struck and killed by MTA bus in Laurelton, Queens

A bicyclist was struck and killed by an MTA bus Saturday in Queens.
QUEENS, NY・7 HOURS AGO
ABCNY

Police shot the driver of a vehicle in Brooklyn early Saturday after an officer was struck by the car.
BROOKLYN, NY・12 HOURS AGO

Police in Suffolk County are making an example of drivers who should not be on the road.
SUFFOLK COUNTY, NY・11 HOURS AGO
ABCNY

Two NYPD officers were reunited with a blind man they pulled to safety after he stumbled off a subway platform in Brooklyn last week.
BROOKLYN, NY・2 DAYS AGO
ABCNY

On Memorial Day Weekend, an intersection in Far Rockaway was disrupted by gunfire.
QUEENS, NY・7 HOURS AGO
ABCNY

It was a close call for one New Jersey family after a tree crashed down on a backyard tent.
PLAINFIELD, NJ・7 HOURS AGO

Suffolk County police say the 16-year-old boy posted on Instagram that he was going to shoot up Bellport High School in Brookhaven.
SUFFOLK COUNTY, NY・1 DAY AGO
ABCNY

Police say they found a 22-year-old man with a gunshot wound to his stomach on Clarkson Avenue just before 7 p.m. and a dead man in an apartment up above on the second floor.
2 DAYS AGO
ABCNY

Andrew Abdullah said nothing as he was formally charged with second-degree murder and weapons charges.
BROOKLYN, NY・2 DAYS AGO

Authorities say 25-year-old Andrew Abdullah, who has about 20 prior arrests, was the man seen pacing around the subway car before shooting 48-year-old Daniel Enriquez in the chest, killing him.
4 DAYS AGO
ABCNY

The 90-year-old woman was walking on West 64th Street when a man approached her and took her purse from her walker.
UPPER WEST SIDE, NY・2 DAYS AGO
ABCNY

NYC offices could be half-filled by September, business group says

Animal Control rescued 16 German shepherds and three Dobermans from what officials called the dilapidated basement of a once shining mansion in New Jersey Tuesday.
PATERSON, NJ・2 DAYS AGO
ABCNY

A 19-year-old man is in the hospital after being attacked by another man with a hatchet.
MANHATTAN, NY・4 DAYS AGO
ABCNY

The exhibit was organized by the Center for Educational Innovation as part of its Benchmarks program which empowers children to have a voice and display those ideas in a public setting.
NEW YORK CITY, NY・2 DAYS AGO
ABCNY

Police released the first photos of the man suspected of fatally shooting a man in an unprovoked attack on a Manhattan-bound subway train.
MANHATTAN, NY・5 DAYS AGO