Is Palantir the AWS of Data Analytics?

It comes as no surprise to anyone in the business world that companies are increasingly relying on data for everything they do. According to IDC, more than 80% of an organization's data will be unstructured by 2025. This means that customer records or important legal documents are siloed in different systems, which presents a challenge for traditional data solutions.

As a result, management could spend years working with high-cost consultants attempting to build in-house solutions. Fortunately, Palantir Technologies (NYSE: PLTR) develops a software-as-a-service (SaaS) platform called Foundry. Unlike much its competition, Foundry provides multiple capabilities as part of a unified platform. This helps prevent the risks that come with disparate technologies and ensures a seamless experience in which data history, security, and privacy are protected.

Amazon (NASDAQ: AMZN) also recognized early on that data was becoming more important for decision-makers within organizations. Just as Amazon identified that aggregating and storing data was going to become a problem, Palantir has identified that unifying and interpreting this data is becoming increasingly challenging as companies acquire more customers and invest in new operating systems. 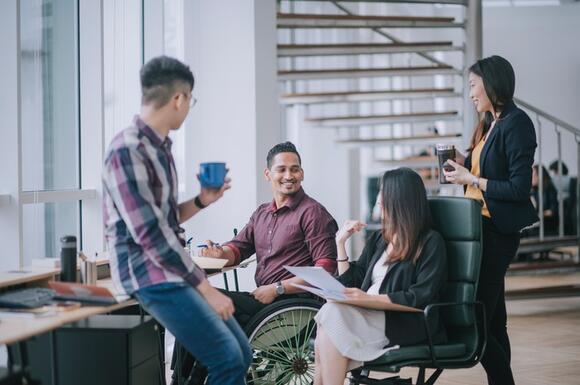 Where is Palantir today?

Following its IPO in September 2020, Palantir received a lot of media coverage. It even briefly became a meme stock , and by January 2021, shares had skyrocketed over 250% from its IPO price.

Throughout 2021, Palantir slowly came back to Earth as investors started forming a better understanding of its business. Palantir reported $392 million in revenue during Q3 2021, representing 36% year-over-year growth and 203 total customers. Although this level of growth is impressive, the company has been criticized by Wall Street for being heavily reliant on government contracts, leading some to fear that Palantir will struggle to expand into the private sector in a meaningful way. By comparison, competing software analytics platform Snowflake reported over 5,400 customers, 173% net revenue retention, and revenue growth of 110% year over year for the fiscal quarter ended Oct. 31, 2021.

Although Snowflake and Palantir experienced heavy sell-offs during the final months of 2021, Snowflake currently trades at 106 times its trailing-12-month sales compared to Palantir's 25 times. Despite committing to 30% revenue growth each year over the next four years, the pace at which Palantir is growing compared to peers and its path to penetrate the private sector remain legitimate investor concerns.

Why are certifications important?

As a company acquires more customers, it inherently collects more data which can be used to hone existing product features. In the early 2000s, Amazon understood that data would become an important pillar for companies and that physical servers should be virtualized. This dynamic is referred to as cloud computing . Cloud computing allows businesses more flexibility and scalability than physical servers, and is often a more cost-effective solution.

In 2006, Amazon made its first strides to tackle server virtualization by introducing a cloud hosting solution called Amazon Web Services (AWS). Perhaps what was even more innovative was the way that Amazon commercialized this product: Amazon drove awareness in the marketplace by introducing a certification program. Since businesses are increasingly requiring candidates to be experts in areas such as digital advertising, customer relationship management (CRM), and data analytics, certifications allow employers to have standards across the employee base because companies need teams that are well-versed on these software products.

Public health agencies are already leveraging Foundry to create unified catalogues of data to power response workflows including tracking and analyzing the spread of COVID-19 and coordinating with hospitals and medical supply manufacturers. Moreover, Palantir is used by financial institutions to combat crimes such as money laundering. Although it is encouraging to see Foundry used for critical business operations, it could be argued that its use cases have much more room to grow across these organizations, rather than combating one specific problem.

In effect, tools such as AWS or Foundry can become vertically integrated across different product groups and functions in a company. This methodology has helped Amazon sell AWS to millions of customers and grow it into a $50 billion run-rate revenue business. By comparison, Palantir has only guided for revenue of $1.5 billion for calendar 2021, but Palantir is looking to replicate the AWS blueprint as it seeks to penetrate private sector growth. Just as AWS has become a market leader in the cloud, Palantir has a huge opportunity as it looks to build the central operating system for big data.

How does this help Palantir?

Amazon used used its AWS certification program to create more awareness in the marketplace. In turn, it was able to learn the pain-points of business of all sizes and create numerous applications for those organizations. The primary goal of Foundry is that it will have such a profound impact within an organization that its use cases begin to compound. In effect, Foundry would become the central nervous system and backbone for data as artificial intelligence and machine learning become more mainstream for companies. Instead of selling Foundry to one organization for one particular use case, Palantir can accelerate and expand the use of its software as more people become certified across different functions throughout a company. The certification program could be a lucrative driver of future business for Palantir, especially as the company seeks to grow beyond its government segment, thereby fueling long-term momentum for the stock.

10 stocks we like better than Palantir Technologies Inc.
When our award-winning analyst team has a stock tip, it can pay to listen. After all, the newsletter they have run for over a decade, Motley Fool Stock Advisor , has tripled the market.*

They just revealed what they believe are the ten best stocks for investors to buy right now… and Palantir Technologies Inc. wasn't one of them! That's right -- they think these 10 stocks are even better buys.

The world's best companies are on sale.
STOCKS・15 HOURS AGO

A sale of a large block of shares in Rivian is hurting investor sentiment.
STOCKS・18 HOURS AGO
dailyhodl.com

These exceptional companies are on sale and can remain in your portfolio forever.
STOCKS・2 DAYS AGO

Valuations are falling to their lowest levels in years, creating an excellent opportunity to buy the dip.
STOCKS・2 DAYS AGO
Business Insider

A member of a superyacht crew also told The Times of London that one owner had his bar stools made from whale foreskin.
BOATS & WATERCRAFTS・23 DAYS AGO
electrek.co

As part of a lawsuit between shareholders and Elon Musk regarding his “funding secured” tweet, new text messages and emails between Musk and people involved have been released. The communications pretty much confirmed how most people saw the situation: Elon Musk took a meeting with the head of...
BUSINESS・21 DAYS AGO
Inc.com

Jeff Bezos, the founder and former CEO of Amazon, and Elon Musk, the CEO of Tesla and soon-to-be owner of Twitter, don't strike me as best buds. The two men have competed over the past few years for the title of the world's richest man, a title Musk holds. They also sort of compete in space, with Bezos' Blue Origin competing against Musk's SpaceX.
BUSINESS・21 DAYS AGO
HipHopDX.com

Ice Cube returned from a trip to Morrison, Colorado last week where he performed at the historic Red Rocks Amphitheater alongside Cypress Hill, E-40 and Too $hort for the annual 420 on the Rocks show. Now presumably back at home in Los Angeles, the N.W.A legend has turned his attention...
MORRISON, CO・21 DAYS AGO
itechpost.com

The market has shunned growth stocks, creating an opportunity to buy them at huge discounts.
STOCKS・21 HOURS AGO
The Motley Fool

The ongoing tech sell-off has created some golden buying opportunities for long-term investors.
STOCKS・1 DAY AGO