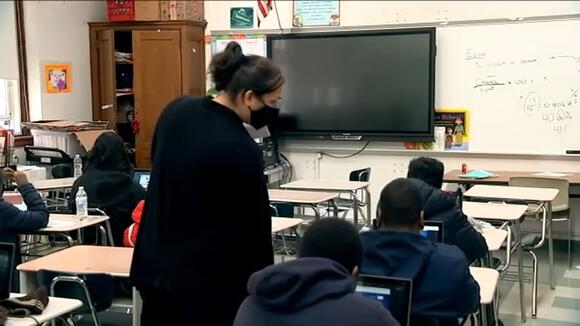 Face masks were back in schools across Nassau County Wednesday after day of confusion following a state Supreme Court ruling and a quickly filed appeal. Nearly two dozen districts made masks optional after Supreme Court Judge Thomas Rademaker ruled on Monday that the mandate issued by the state Department of Health in December was unconstitutional, saying the health department doesn't have the authority to make new laws. But on Tuesday, New York Appellate Judge Robert Miller granted a stay in the state's lawsuit over the COVID-19 mandate, meaning it remains in place while case is appealed -- and schools must enforce it. Earlier this month, Nassau County Executive Bruce Blakeman signed an executive order that gave public schools the option to mandate masks, and on Wednesday, he once again said he believes Governor Kathy Hochul and the health department do not have the authority to issue the statewide school mask mandate. ALSO READ | NJ tow truck driver hailed as a hero after saving driver from crash

"By what authority is the governor issuing this mandate and we believe that there is no authority," he said. "We believe that it's overbroad, that it's arbitrary, capricious, and it violates New York State law and it's unconstitutional." Hochul has already implied the school mask mandate would be lifted once infection numbers went down. "I don't want to keep any requirements for safety in place a day longer than necessary," she said. "But I will not do it a day before we can do it safely." She also expressed optimism that the mandate would be upheld. "As governor, my top priority is protecting the people of this state," she said. "These measures are critical tools to prevent the spread of COVID-19, make schools and businesses safe, and save lives. I commend the Attorney General for her defense of the health and safety of New Yorkers, and applaud the Appellate Division, Second Department for siding with common sense and granting an interim stay to keep the state's important masking regulations in place. We will not stop fighting to protect New Yorkers, and we are confident we will continue to prevail." An Appellate Court hearing on Friday could determine the future of the policy, and the New York Archdiocese and Brooklyn Diocese have already told parents they will lift their mask mandates if court upholds the lower court ruling. The mandate had been reinstituted over concerns about a winter surge of coronavirus cases, and parents are split over the issue. "It's not invasive, it's effective, and it is simple," one parent said. "Our children do not appear to be complaining about it, mostly the parents are." ALSO READ | MTA officials address alarming rise in crime, promise more uniformed officers on platforms

Michael Demetriou was a plaintiff in the case and said he thought it was time to speak out and take action. "I'm just a father who said enough is enough, and we have to protect our children at all costs," he said. ---------- * Get Eyewitness News Delivered * Follow us on YouTube * More local news * Send us a news tip * Download the abc7NY app for breaking news alerts

The Supreme Court has already said these mandates are unconstitutional, so the NY Governor and other politicians are just holding onto THEIR power for as long as they can.

COVID isn't over. One example is the fact that some 20 New York City judges are now COVID positive after they attended a retreat in Montauk last weekend, according to published reports.
NEW YORK CITY, NY・3 HOURS AGO
ABCNY

Happy the elephant has lived at the Bronx Zoo for 45 years, but the New York State Court of Appeals will now decide if she is a person.
NEW YORK CITY, NY・9 HOURS AGO

The Supreme Court is set to rule on a case that could transform the landscape of what guns are legally allowed to be carried in New York.
NEW YORK CITY, NY・2 DAYS AGO

President Joe Biden is helping baby formula manufacturers and major retailers with logistic support to get formula into the country, according to a White House official, and also attempting to identify areas where communities may be at "critically low supply."
SUFFOLK COUNTY, NY・1 DAY AGO
ABCNY

Transport Workers Union Local 100 officials said bus operators are tired of being treated like punching bags, and they detailed the changes they want during the event outside the Kingsbridge Bus Depot in Inwood.
NEW YORK CITY, NY・23 HOURS AGO
ABCNY

A court expert released a draft of new congressional maps for New York that are more favorable to GOP than the original maps drawn by Democrats
NEW YORK CITY, NY・2 DAYS AGO
ABCNY

The arrests were part of Operation Long Island Wave, and those arrested were wanted for offenses including homicide, attempted murder, narcotics, weapons offenses, robbery and assault.
CENTRAL ISLIP, NY・54 MINUTES AGO

Lionsgate is planning to the build the production hub on a 15-acre lot on Dayton Street, which used to be the Seth Boyden Houses.
1 DAY AGO
ABCNY

This week's MTA heroes are the workers who are responsible for helping us all navigate the city's transit system.
NEW YORK CITY, NY・1 DAY AGO
ABCNY

The CDC is investigating to see if they may be associated with the ongoing nationwide Acute Hepatitis in Children investigation.
KIDS・54 MINUTES AGO

There are questions about why the law wasn't invoked and how the effectiveness of "red flag laws" passed in 19 states and the District of Columbia can differ based on how they're implemented.
BUFFALO, NY・2 DAYS AGO
ABCNY

An on-duty EMT was shot in the back of an ambulance by a drunk and disorderly patient Wednesday night, according to police.
STATEN ISLAND, NY・18 HOURS AGO
ABCNY

Gas in New York is quickly approaching an average of $5 per gallon, increasing again Thursday to $4.91.
TRAFFIC・4 HOURS AGO