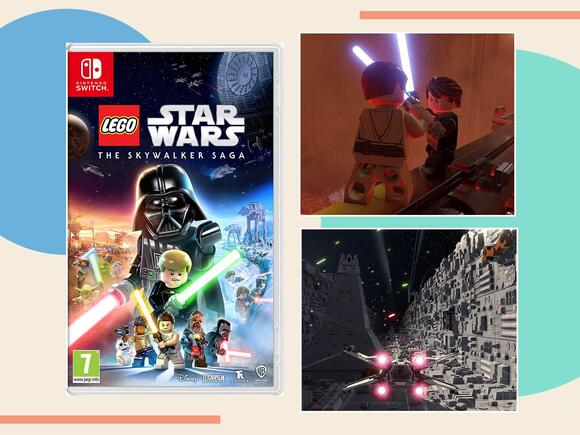 The Lego Star Wars titles have been well-loved by players of all ages for their easy accessibility, detailed level of exploration and a large roster of recognisable characters from the Star Wars universe.

The original Lego Star Wars videogame was first released in 2005 and followed the events of episodes one through to three. Subsequent titles have expanded to include the original trilogy, spin-off shows and The Force Awakens. Now, The Skywalker Saga is set to include all nine of the mainline films, making it the biggest title in the Lego games series yet.

Players can choose to start their adventure from any of the three main trilogies, so if you are a fan of the originals, or thought the prequels got a bad wrap, then you can tailor your progression to each set of films.

Lego Star Wars: The Skywalker Saga is also set to include “Mumble Mode”, a feature that allows players to turn off the original voice acting and have the characters mumble like they used to in older Lego videogames, if you want to embrace its slapstick humour.

In order to find out more about the game’s release date, the best pre-order deals and what characters we can expect to make an appearance, read on.

When is ‘Lego Star Wars: The Skywalker Saga’ released?

Lego Star Wars: The Skywalker Saga was first announced in 2019 to coincide with the release of the upcoming Rise of Skywalker film, but due to frequent delays it was pushed back to a release window of “Spring 2022”.

On 20 January 2022, a new trailer was released that confirmed that Lego Star Wars: The Skywalker Saga would arrive on Tuesday 5 April 2022.

The game will be available on PC, Nintendo Switch, PS4, PS5, Xbox One and Xbox series X/S.

How to pre-order ‘Lego Star Wars: The Skywalker Saga’

As well as a standard copy of the game, Smyths Toys (£49.99, Smythstoys.com ) is offering an exclusive Lego snowspeeder toy with every purchase of the game, and Amazon (£49.99, Amazon.co.uk ) also has an exclusive offer that includes a “classic character pack”, meaning players will be able to expand the available roster of characters.

Game (£59.99 Game.co.uk ) also has an exclusive “Carbonite Edition” on offer that includes the game, DLC character packs, a Luke Skywalker minifigure and a steelbook case featuring Han Solo frozen in carbonite on the cover.

The adventure starts by letting you pick the trilogy of your choice, with The Phantom Menace, A New Hope or The Force Awakens , available as jumping-off points.

New combat mechanics have been implemented with over-the-shoulder shooting controls and a new cover system for firefights, as well as combos and counterattacks you might expect from lightsaber duels.

Players can also travel to new planets as they journey through the entire Star Wars saga, from the desert landscapes of Tatooine to the cities and jungles of Naboo. Rather than having a single hub-world to return to and begin new chapters, players will be able to unlock new planets in the galaxy and explore them at their leisure, while taking on side missions to hunt down collectibles.

Which characters will appear in ‘Lego Star Wars: The Skywalker Saga’?

According to the gameplay trailer, Lego Star Wars: The Skywalker Saga will feature over 300 playable characters. Each one will have an assigned role with different abilities, such as Jedi's, bounty hunters, protocol droids and more.

We can expect to see the main cast of characters appear, including the eponymous Skywalkers, Darth Vader, Han Solo and C3PO. We can also see smaller characters such as Babu Frik and the Gonk droids.

Looking for your next Lego set? This 2,585-piece globe spins and glows in the dark

Depp said he discovered Disney would not recast him in "Pirates" days after Amber Heard's Washington Post op-ed article was published.
FAIRFAX, VA・27 DAYS AGO
TheStreet

Once again, Disney (DIS) - Get Walt Disney Company Report is finding itself embroiled in a political quagmire owing to its support of the LGBTQ community, after Florida Gov. Ron DeSantis punished Disney for denouncing his “Don’t Say Gay Bill,” by seeking to revoke Disney World’s designation as a special tax district (which as we pointed out, is ultimately a meaningless gesture).
FLORIDA STATE・26 DAYS AGO
Insider

From the gourmet meals and missions to the VIP perks and room with a droid, here's what the galactic experience was like — and why we'd do it again.
LIFESTYLE・27 DAYS AGO
The Independent

Senior Year: Viewers of ‘awful’ Rebel Wilson film are all complaining about one plot hole

Viewers of the Netflix film Senior Year have lambasted the comedy after spotting a significant plot hole in its story.The film stars Rebel Wilson as a high school cheerleader who falls into a coma before prom night, only to reawaken 20 years later and return to her school for unfinished business. Senior year was savaged by critics and by viewers on social media, earning a critics’ score of just 26 per cent on the review aggregation website Rotten Tomatoes.Many people on social media described the film as “awful” – though others have defended it, insisting it works as a...
MOVIES・1 DAY AGO

Doctor Strange and his multiverse got to linger a little longer atop the weekend box office as Tom Cruise and “Top Gun” wait in the wings. Marvel's “Doctor Strange in the Multiverse of Madness” was the top-earning film of the weekend for the third straight week, bringing in $31.6 million in 4,534 North American theaters, according to studio estimates released Sunday. “Downtown Abbey: A New Era” made a strong opening showing for Focus Features with $16 million from 3,820 theaters, but there was no real blockbuster competition for “Doctor Strange." That will change with the long awaited, and long...
MOVIES・3 HOURS AGO
The Independent

Obi-Wan Kenobi’s Moses Ingram: ‘If you’ve got talking droids and aliens but no people of colour, it doesn’t make sense’

On paper, Moses Ingram doesn’t seem much like a villain. At least, not the kind of villain we’re used to seeing in Star Wars. Standing next to the 6ft 6in frame of Darth Vader (as embodied by David Prowse), Ingram – 5ft 5in, according to IMDb – might struggle to cultivate quite the same air of menace. But you’d be a fool to underestimate her.The actor is best known to TV viewers through her Emmy-nominated role in The Queen’s Gambit as Jolene, the orphan peer of Anya Taylor-Joy’s chess savant, a part she won straight out of drama school. Her latest...
MOVIES・1 DAY AGO
The Independent

George RR Martin: ‘Game of Thrones was pitched as The Sopranos in Middle Earth’

George RR Martin has revealed that when Game of Thrones, the hit HBO show based on his epic fantasy novel series A Song of Ice and Fire, was first being pitched to television networks it was sold as: “The Sopranos in Middle Earth”.Speaking on the second day of the Santa Fe Literary Festival, in conversation with friend and bestselling author Douglas Preston, Martin discussed his history in Hollywood and noted that networks are often looking for pitches which “compare things to previous things that have been successful”.He continued: “Game of Thrones was first sold by David Benioff and...
TV SERIES・3 HOURS AGO