Over the past year, share prices of electric vehicle (EV) kingpin, Tesla (NASDAQ: TSLA) have gained 8% and Ford (NYSE: F) stock has gained 73%. But year-to-date, Tesla stock is now down 13%, the same as the Nasdaq Composite , while Ford stock is down 4%.

If you were to ask EV industry watchers three to five years ago if they would rather own Tesla or Ford, most would have likely said Tesla. And they would have been right. But those gains are in the past. And competition in the EV space is fiercer than ever before.

With Tesla posting record production and Ford investing heavily into EVs, not to mention Tesla reporting its Q4 2021 and full-year earnings after market close today, now is the time to decide whether Tesla or Ford is the better buy now.

The EV leader is just hitting its stride

Howard Smith (Tesla): With the ongoing market correction hitting more speculative growth stocks harder than most, Tesla shares are down nearly 30% just from this month's highs. That's understandable in a sector like electric vehicles where the market itself is still young and evolving. That could mean it's a good time to get exposure to what has already proven to be a very profitable business model in the electric car market.

The recent stock market swoon has taken $300 billion off of Tesla's market cap . While it is clearly valued beyond what its current vehicle business warrants, investors are looking ahead toward massive growth there, along with potential in Tesla's renewable energy business. Meanwhile, Ford shares have soared 70% over the last year, mainly due to hopes that its transition to EVs will be a huge success. Its market cap touched $100 billion, before a recent pullback to its current $79 billion valuation. But Ford has also announced plans to invest $30 billion to build out its EV business through 2025. 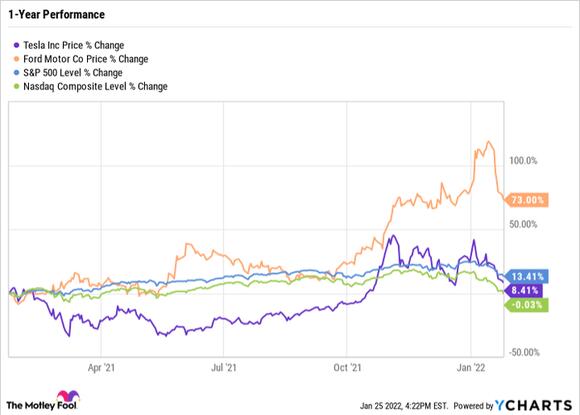 By comparison, Tesla can spend proportionally less capital relative to its market cap. It already has the experience of ramping up factories in the U.S. and China, making the upcoming start-ups in Texas and Germany more likely to succeed. Tesla is just hitting its stride with the overall EV market expected to vastly expand.

It will face new, real competition from both legacy automakers and new EV makers. But it wasn't long ago that some investors argued it might never be profitable. Now the discussion is centered around just how profitable it can be. Tesla has reported $3.2 billion in net income just through the first nine months of 2021. It will announce its fourth-quarter and full-year 2021 financial results after the bell on Wednesday, Jan. 26. Investors might just decide its recent pullback looks like somewhat of a bargain when they hear those results.

Ford is making a name for itself in the EV industry

Daniel Foelber (Ford): Seemingly overnight, Ford has reinvigorated its stodgy reputation with exciting new EV models and massive capital commitments. The legacy automaker is gunning for a dominant slice of the electric truck pie and wants to take bites out of the electric SUV and van markets too.

By 2030, it expects to generate 40% of revenue from EVs. The problem with this claim is that we don't know how much Ford's electric vehicle efforts will cannibalize its existing business . Bears may question the profitability of Ford's EV lineup as compared to its existing internal combustion engine (ICE) vehicles. But bulls cold argue that early investments in electric trucks, SUVs, and vans could help propel Ford ahead of the competition and capture sizable market share. From there, the hope is that profitability would naturally follow. 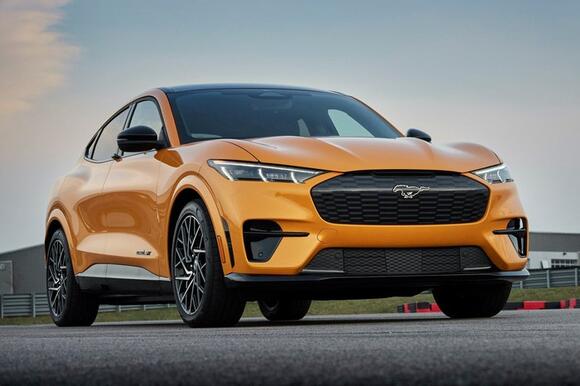 Ford is in ultra-growth mode. And with that strategic shift comes market potential and greater risk. One way to reduce that risk is for Ford to show investors there is strong demand for its vehicles, and that consumers as a whole are ready to embrace EVs. So far, Ford stands out from other legacy automakers because it has blown demand expectations out of the water. It sold 27,000 Mustang Mach-E SUVs in 2021 and finished the year with over 200,000 reservations for its F-150 Lightning pickup truck.

Approaching Ford from the standpoint of what the company wants to become, not what it used to be, helps an investor put the risks and potential reward out in the open. Ford benefits from a large and experienced workforce and a history of manufacturing and production efficiency. Although it has a nice medium-term trajectory in the electric pickup market, there's no denying it is a new kid on the block when it comes to the EV industry. Meanwhile, Tesla spent years making mistakes such as overpromising and underdelivering, as well as overly automating its manufacturing process . The Tesla of today is profitable, good at what it does, and looking to grow market share as much as possible and safeguard its established position.

Despite Ford's disadvantage, its valuation of $79 billion compared to an unprofitable newcomer like Rivian's (NASDAQ: RIVN) $53 billion market cap makes Ford the best bet for investors looking for tomorrow's leader in the EV pickup truck market.

After years of growth and inconsistent profitability, Tesla has emerged as a polished company. It has the highest operating margin of any automaker, low debt, and an industry-leading position in EVs. Tesla deserves to be a staple in any EV investor's basket. Yet Ford also shows promise and stands out as one of the most ambitious legacy automakers when it comes to deploying capital toward beefing up battery production and manufacturing capacity.

We both agree that Tesla and Ford are two of the stronger EV options out there today. Investors could do well to add a starter position in either company.

2 Top Electric Vehicle Stocks to Buy for the Long Haul

Recent volatility helps highlight that a mix of holdings is a smart approach.
ECONOMY・2 DAYS AGO
The Motley Fool

And why this could be a buying opportunity for long-term investors.
STOCKS・13 HOURS AGO
The Motley Fool

Tesla Stock Split: Why It Matters

Tesla stock is down more than 40% this year. Could a stock split be a catalyst to turn the tide?
STOCKS・15 HOURS AGO
The Motley Fool

Is the EV king heading for a major correction?
STOCKS・2 DAYS AGO

Two of the legendary investor's recent purchases especially stand out.
STOCKS・20 HOURS AGO
The Motley Fool

SoFi vs. Ally Financial: Why 1 is a Buffett Stock and the Other Isn't

Ally and SoFi have similar business models, but one is a Warren Buffett stock and the other isn't.
STOCKS・2 DAYS AGO

It offers the powerful combination of growth and dividends.
STOCKS・15 HOURS AGO
The Motley Fool

It depends: Some of us have no business in stocks right now, but for others, there's no better time to buy.
STOCKS・18 HOURS AGO
The Motley Fool

With time and patience, you can add zeros to your net worth.
STOCKS・20 HOURS AGO
The Motley Fool

Tesla no longer ranks as the largest position in Ark's flagship portfolio.
STOCKS・18 HOURS AGO
The Motley Fool

A sharp run off the all-time low over the past two weeks has hit a wall today.
STOCKS・14 HOURS AGO
The Motley Fool

The S&P 500 has fallen nearly 19% this year, and even briefly took a stroll through bear market territory on Friday. Current forecasts ranging...
STOCKS・5 HOURS AGO
The Motley Fool

Companies are more focused than ever on their impact beyond financial performance.
ECONOMY・18 HOURS AGO
The Motley Fool

The Trade Desk continues to execute, and it has appealing growth prospects.
STOCKS・16 HOURS AGO
The Motley Fool

Why Fisker Shares Are Falling Today

The company is raising additional cash in a difficult market.
STOCKS・15 HOURS AGO
The Motley Fool

Why Enphase Energy Stock Was Down Over 2% Today

Growth stocks in general were being dragged down due to a social media company's reduced financial outlook.
STOCKS・14 HOURS AGO
The Motley Fool