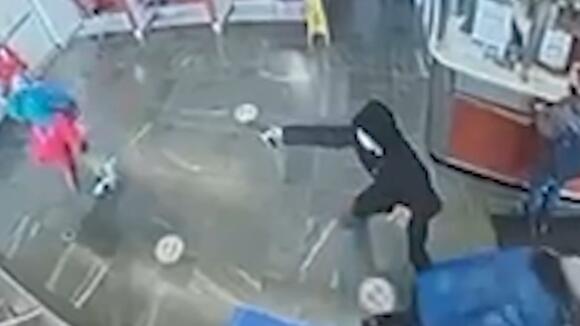 The 25-year-old gunman who police say opened fire inside Jacobi Medical Center in the Bronx was arrested after he apparently wrote his name in the sign-in book when he arrived at the hospital. Authorities say Keber Martinez spotted his 35-year-old victim inside the waiting area outside the hospital's emergency room Tuesday afternoon. The two, who are believed to know each other, then got into a verbal dispute. Martinez fired four shots, striking the other man once in the arm and sending everyone in the waiting area scrambling for safety. ALSO READ | NJ tow truck driver hailed as a hero after saving driver from crash

Mayor Eric Adams said the shooting was possibly gang related and that the suspect "noticed a rival gang member, possibly." "He pulled out a gun and shot the person," Adams said. "And sitting in the emergency room at the time were families, a child, and hospital staff." The victim was rushed into the emergency room, while the gunman fled the scene. In surveillance video obtained by Eyewitness News, the gunman is seen opening fire.

Both men were in the hospital for treatment of prior injuries at the time. The victim had been shot in the leg last year, and he was reportedly experiencing pain from that injury when he went to the hospital. Martinez was charged with attempted murder, reckless endangerment and criminal possession of a firearm. He has six prior arrests, the last in May 2020, for assault, drugs, grand larceny and criminal possession of a weapon. ALSO READ | Mayor Adams unveils New York City's 'Blueprint for Safety' to combat violence

well dam he's not that bright! goes to show you times are fast so fast that the thought of dam my name is in the book didn't even surface just action! We seriously need divine intervention! 🙏🏾

Even in hospitals the thugs are shooting without regard to human lives, no surprise cause it's the Bronx!

So was he bailed out yet?😆 NY is fuct! In a month from now "JMC shooter out on bail arrested again for blah blah blah!" will be a thing,

The girl, an innocent bystander who was a half block away when the gunfire erupted, is identified as 11-year-old Kyhara Tay of the Bronx.
BRONX, NY・5 HOURS AGO
ABCNY

The armed robbers struck at least four times throughout the month of April in Williamsburg, Brooklyn. Police are hoping surveillance videos will lead to their arrests.
BROOKLYN, NY・9 HOURS AGO
ABCNY

Several injuries and one fatality have been reported after a gruesome car crash in Paterson, New Jersey.
PATERSON, NJ・1 HOUR AGO
ABCNY

A police car remained outside an apartment building in Brooklyn on Sunday night after a young girl was found dead in her fourth-floor apartment.
BROOKLYN, NY・1 DAY AGO

Police found Shalom Guifarro's body inside her bedroom in a building on Lincoln Place in Crown Heights around 1 p.m. Sunday.
BROOKLYN, NY・1 DAY AGO
ABCNY

An NYPD officer is recovering after being attacked by a dog in Brooklyn.
BROOKLYN, NY・1 DAY AGO
ABCNY

Four days after Suffolk Police said they do not believe Shannan Gilbert was part of the murders of sex workers committed by the Long Island Serial Killer at Gilgo Beach, Gilbert's sister tells Eyewitness News she still believes someone killed her sister.
SUFFOLK COUNTY, NY・43 MINUTES AGO
ABCNY

The mugger stole about $4,200 from the victim's pocket before fleeing.
QUEENS, NY・2 DAYS AGO

One teenager is dead and another was rescued after being trapped beneath a sand collapse at a beach in New Jersey on Tuesday.
TOMS RIVER, NJ・1 HOUR AGO
ABCNY

A fight had broken out on Laurel Glen Drive and Shelton Police responded to the scene at around 11:55 p.m. on Saturday.
1 DAY AGO
ABCNY

Officials say flames broke out just after 10 p.m. Monday in the 2900 block of Brighton 5 Street.
BROOKLYN, NY・9 HOURS AGO
ABCNY

The car crashed on Shore Road at the Split Rock Golf Course just after 4:15 a.m. Monday.
BRONX, NY・1 DAY AGO

Mayor Eric Adams and other faith leaders held a vigil at Bethel Gospel Assembly Church in Harlem Monday evening honoring the victims of the attack.
23 HOURS AGO
ABCNY

The shockwaves from the tragedy in Buffalo are being felt in New Jersey after the shooter's writings mentioned three towns by name, including two in Ocean County and one in Hudson County.
TOMS RIVER, NJ・6 HOURS AGO
ABCNY

Watch the first episode of "Missing," ABC7's new series investigating cold cases of people who have vanished without a trace. This is the story of Leanne Marie Hausberg of Bensonhurst, a 14-year-old girl who went missing in 1999.
NEW YORK CITY, NY・1 DAY AGO
ABCNY

The NYPD said they are stepping up patrols outside Black houses of worship in response to the mass shooting in Buffalo.
BUFFALO, NY・2 DAYS AGO
ABCNY

Frank James, the man who allegedly shot and wounded 10 morning commuters on a Manhattan-bound N train in Sunset Park, pleaded not guilty Friday.
4 DAYS AGO
ABCNY

Newark police officers responded to North Star Academy West Side Park Elementary School just after 10 a.m. on a call of a minor in possession of a loaded handgun.
1 DAY AGO
ABCNY

One of the rooms the vehicle crashed through was a teenager's bedroom, in which a 13-year-old boy was asleep.
4 DAYS AGO