Audio Pro addon C5A speaker review: Does it sound as good as it looks? 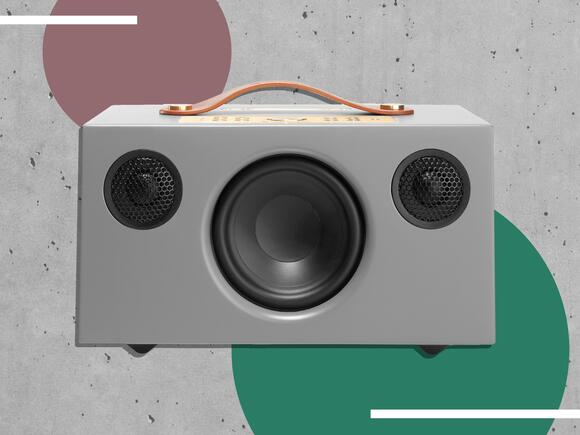 Audio Pro’s C5A speaker sits right in the middle of Audio Pro’s Addon range, between the cheaper C3 (189, Currys.co.uk ) and more luxe C10 (£249, Amazon.co.uk ). But you’d probably need to get the blueprints out to tell the differences in how it looks.

The additional “A” in the title, stands for the extra Alexa assistance this model packs, and it also promises connectivity to other Audio Pro speakers dotted around your house – this gives you the ability to either sync playback between them or play different sound sources on each.

Great as it sounds though, the trouble with getting a multiroom set-up going is that it means throwing your lot in with one brand to the tune of several hundred quid. So if you’ve got any little niggling gripes with any one bit of your speaker system, you could end up silently fuming for decades to come.

Get it right, of course, and you can turn your home into a very small club, with electro in the front room, soul and jazz for hobnobbers in the kitchen and ambient vibes in a chill-out cupboard. The first step is getting the cornerstone unit right, the Sun around which your Solar System of extra speakers will orbit.

The Audio Pro Addon C5 was already a prime contender for that honour even before the addition of a voice assistant. But has the C5A managed to raise the bar, or has Alexa muddied what worked so well last time?

Over two weeks of near-constant use, we put the Addon C5A through its paces by testing how it dealt with different genres of music streamed through Spotify, music and podcasts played via Bluetooth, live radio played by Alexa and audio played from a Mac laptop over Airplay and the 3.5mm line-in jack. Here’s what we thought. 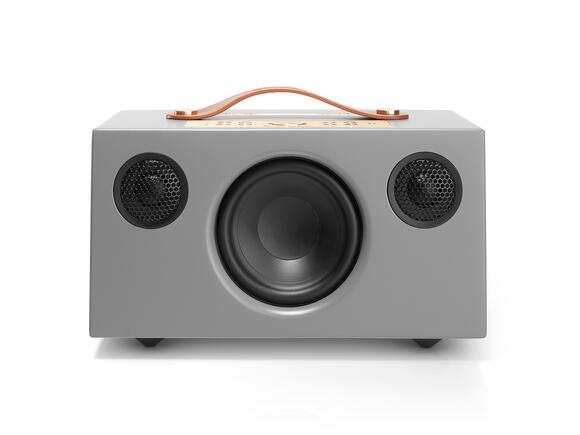 As we’ve mentioned, there’s very little to distinguish the C5A visually from the C5 – but that is in no way a criticism. If you were as beautifully put together as the C5, you’d probably want to stick with your look too.

The idea is for it to become an unobtrusive and elegant presence in your home – hence it comes in white, battleship grey or black. While the gold control panel on top makes it feel like the kind of middleweight home speaker you’d pick up from Oliver Bonas.

That control panel includes buttons for power, source selection, Bluetooth toggling, pause and play and four preset playlists, plus an aux in jack, but doesn’t feel cramped at all. There’s an extremely satisfying action to those buttons too. 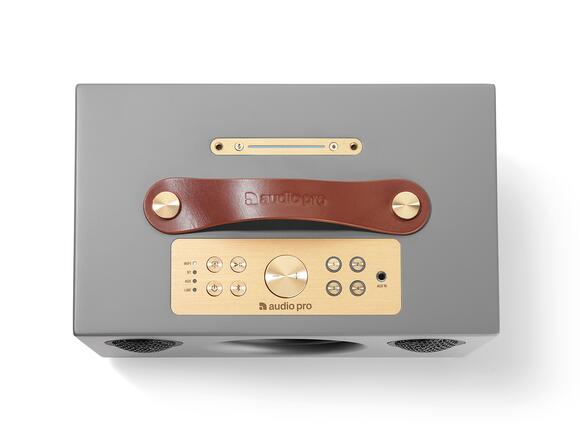 No, it’s not a dealbreaker. But it does add to the overall vibe of a solidly built and properly considered bit of kit. See also, the handle on top of the case for shifting the thing around: it’s a sensible addition which helps balance the overall look of the speaker too.

The microphones which pick up your commands to Alexa are set behind the handle, at each end of an LED volume indicator which also lets you know when Alexa’s got her ears pricked up – that’s the only tweak to the C5A from its predecessor. It all sits together extremely nicely.

Aside from whether it looks nice on a shelf in your kitchen this, really, is the only thing that matters for the Addon C5A. You’re not about to take it to the park with you, unless you’ve got an extension cable – as unlike the C3, there’s no rechargeable battery on the C5A. But other than that, there isn’t much, really, that it can’t do.

The bass fills a room even at low levels – though it needs a little tweaking from its out-of-the-box settings to coax it into life, as the treble gets lost in the bass rumbles – and there’s a level of expressiveness to the sound picture which punches way, way above the C5A’s weight and price point.

Read more: We put the top-rated Sonos Move Bluetooth speaker to the test

Metronomy’s It’s Good To Be Back showcases the Addon C5A’s strengths: even with layers of acoustic guitar, it’s remarkable how composed, coherent and satisfyingly full it all sounds while also pulling out the subtle accents in the production that give the whole thing a propulsive feel.

There are a couple of minus points. Streamed radio sounds pleasingly crisp, though perhaps lacking a touch of that fullness. The audiobook of Bob Mortimer’s ...And Away streamed from Audible sounds decent enough but has a tendency to crackle a little.

A couple of times over our testing period we noticed the streamed radio briefly drop out before coming back in, but the vast majority of the time it was as solid as a rock. 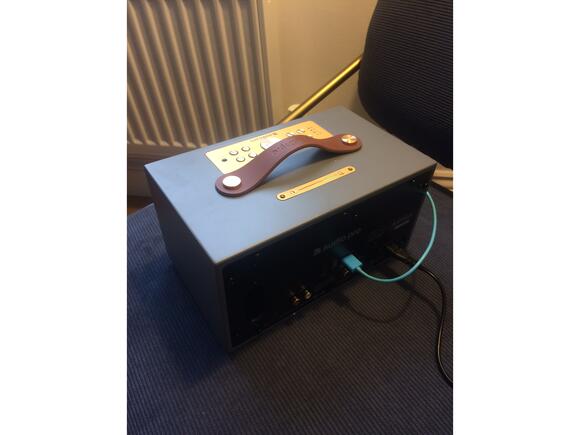 The only downside to the C5A that we can see is the fact that it brings you into the orbit of Audio Pro Control. The dedicated app which allows you to fiddle about with the EQ and your integrated music and radio apps is a bit of a stinker.

The app allows youto set up your WiFi and Amazon Alexa, and you can name your different speakers, tweak the bass, treble and volume, set favourite playlists and sleep timers, and set any alarm clocks you need. But, it’s a bit ugly and wobbly, and there are online complaints abound about how fiddly it can be to get the thing to hook onto your WiFi and to link and unlink speakers.

While we didn’t have any of those problems, there was certainly some lag between app and speaker.

The microphones in the C5A are sensitive enough to hear a call of, “Alexa: play Radio 1,” from downstairs, and one other extremely handy feature is the inclusion of a USB port for charging your phone, tablet or whatever else while you’re streaming from it to the speaker.

As you might have guessed, we really, really, really liked the Audio Pro Addon C5A . The power and detail of its sound immediately puts it toward the top of its class on its own, and it can handle pretty much any genre you can throw at it with aplomb.

On top of that, it’s a lovely thing to look at and feels like it’s built with the intention of taking up residence in your front room for the next several decades. We wouldn’t bet against it making good on that either.

For the latest discounts on speakers and other tech buys, try the links below:

I’m sure you don’t need telling about the nostalgic appeal of Stranger Things. For a series that traffics in all manner of supernatural occurrences – telekinetic teenagers, alternate dimensions, demonic possessions – it is first and foremost a series about the 1980s. Or rather, it is a series about what we all imagine the 1980s to be. Devotees of the Netflix sci-fi have drawn the obvious comparisons to old Stephen King stories, the films of John Carpenter and Steven Spielberg. The latest season borrows heavily from 1984’s horror classic A Nightmare on Elm Street. But Stranger Things has always...
TV & VIDEOS・3 HOURS AGO
The Guardian

Will this fruit-picking robot transform agriculture?