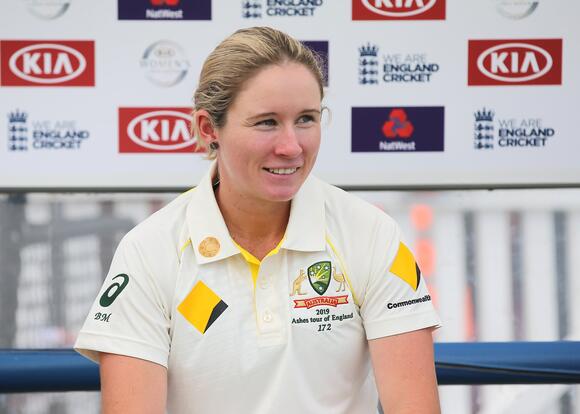 Australia opener Beth Mooney is still on a liquid diet after surgery on a broken jaw but is expected to be fit to play in the only Test of the Women’s Ashes on Thursday.

Mooney broke her jaw in two places when she was hit by a cricket ball in the nets ahead of the series, but, after little more than a week on the sidelines, the 28-year-old looks set to return to her place at the top of the Australian batting order.

“Beth Mooney so far has passed everything that she’s needed to. Assuming she gets through training today like we expect her to she’ll be available and she’ll be playing,” captain Meg Lanning said.

“It’s pretty incredible, right from the moment she got hit, and to come back to international cricket around a week after having jaw surgery, it’s inspirational for the group and she’s been really positive around everyone.

“She looks really good in the nets and in the field as well and she’s confident she’ll have no issues moving forward.”

To come back to international cricket around a week after having jaw surgery, it's inspirational

Australia go into the only Test leading the series against England 4-2 after a nine-wicket victory in the opening Twenty20, with the subsequent two T20s washed out and the points shared.

Lanning opened alongside Alyssa Healy in the first match in the absence of Mooney and hit an unbeaten 64, but she is likely to return to her usual number three position in the Test.

She added: “She (Mooney) has been passed fit to play, so from a medical perspective that’s all good. It was around her comfort levels and her confidence levels getting back into it after getting hit, she’s had no issues at all.

“Once she was cleared and she’s confident and ready to go there was no issues about bringing her back in.

“She’s only on a liquid diet at the moment which doesn’t sound like a lot of fun or variety, so I think the physio, doctor and dietician have been coming up with some meal plans for her to make sure she’s getting enough energy.

“With the Test match and the longer format you need to have that over a long period of time, but they’ve done a great job and so far so good.”

Harlequins centre Andre Esterhuizen has won the Rugby Players’ Association players’ player of the year award.Esterhuizen polled the highest number of votes from his fellow professionals, having enjoyed an outstanding season during Quins’ bid to defend the Gallagher Premiership title.The South African has proved a pivotal figure in them reaching next month’s play-offs, when they will meet Leicester or Saracens.“It is an incredible honour to win this award and for it to be voted by all the players and teams that I’ve played with and against makes it even more special,” Esterhuizen said.Leicester and England full-back Freddie Steward, meanwhile, claimed...
RUGBY・9 HOURS AGO