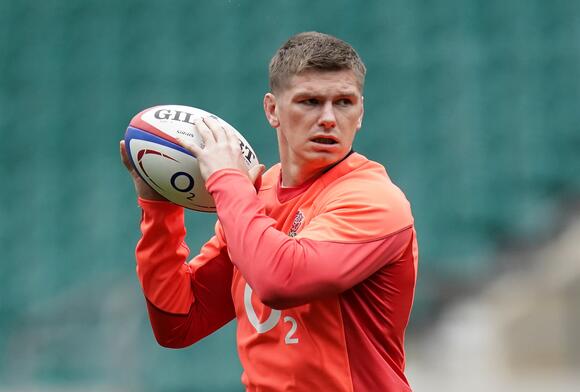 England captain Owen Farrell has been ruled out of the entire Guinness Six Nations because of an ankle problem.

Head coach Eddie Jones has confirmed that Farrell needs surgery on the injury sustained in training for Saracens last week.

It was hoped that the 30-year-old would start the opener against Scotland on February 5 after recovering from damage to the other ankle which had kept him out for two months.

Saracens have confirmed that Farrell will undergo surgery on Wednesday and faces eight to 10 weeks of rehabilitation.

“Owen is out of the Six Nations. It’s a massive blow for him personally and for the team it’s a blow,” Jones said.

“But it’s obviously an opportunity for other guys to step up into leadership roles and for other players to play for that 12 jumper.

“We see it more as an opportunity. In today’s rugby, having your best team on the field is a rare occurrence. We’re pretty used to it. There’s an opportunity there to build a bit more leadership depth.”

Craig Overton claimed his 400th first-class wicket as Somerset rallied against Hampshire at Taunton.Overton claimed the scalps of Felix Organ, Ian Holland and James Vince as Hampshire closed on 144 for five in their LV= Insurance County Championship Division One clash.The England seamer ended the day with three for 21 from 18 overs, with his side leading by 67 runs at stumps.No play was possible before lunch because of a wet outfield, but Holland, with 49 from 111 balls, was the pick of the Hampshire batters after the action finally got under way.England hopeful Harry Brook shone again as Yorkshire...
SPORTS・10 HOURS AGO
The Independent

Fernandinho feels he has achieved everything he intended as he prepares to bid farewell to Manchester City.The veteran Brazilian midfielder will leave City after nine mostly successful years following Sunday’s final Premier League game of the season against Aston Villa.The 37-year-old has won four Premier League titles, six League Cups and one FA Cup since his £30million arrival from Shakhtar Donetsk in the summer of 2013.Champions League success has eluded him, with last year’s runner-up finish the closest he has come to European glory with City, but he does have the chance to sign off with one more Premier League...
PREMIER LEAGUE・9 HOURS AGO
The Independent