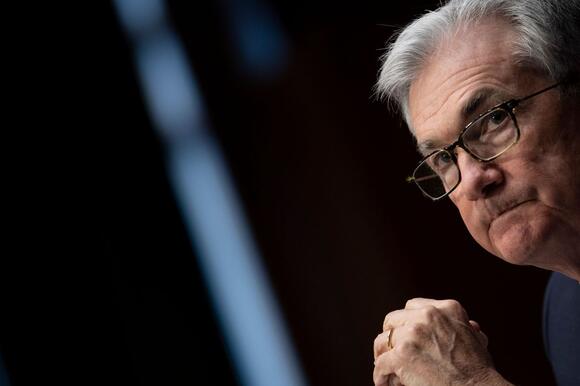 U.S. stocks finished mostly lower Wednesday and bond yields jumped, after the Federal Reserve signaled rate hikes are on the way and other monetary policies eventually will tighten.

Investors also were sifting through quarterly results, including a fresh batch of earnings from Boeing, AT&T, and Tesla.

How did stock index perform?

In other central bank action, the Bank of Canada on Wednesday held its rates steady at 0.25% , but said hikes will be coming this year to help it control high inflation. It also is considering letting maturing government bonds roll off its balance sheet.

U.S. data released Tuesday showed slippage in consumer confidence, on the back of rising prices and the highly contagious omicron variant of the coronavirus that causes COVID-19.

Of the 100 S&P 500 companies to already report fourth-quarter earnings, 17% missed analyst expectations, with 81% beating estimates, according to Refinitiv data. That compares with 84% beating estimates in the past four quarters. A busy after-hours calendar includes quarterly earnings from Tesla, Intel (INTC) Whirlpool (WHR) and Xilinx (XLNX)

Which companies were in focus? How did other assets trade?

Despite the extensive losses seen for stock markets so far this year, it’s not over until it’s over — and investors should keep selling into any big rebounds higher. That’s the advice from a team of strategists at Bank of America, led by Michael Hartnett, in their Friday “Flow Show” note. In focus for the bank is increasing debate about whether the market has capitulated, which refers to investors basically giving up on trying to recapture lost gains.
STOCKS・1 DAY AGO
MarketWatch

COLOMBO, Sri Lanka (AP) — Sri Lankan authorities on Friday closed schools and asked public officials not to come to work in a desperate move to prepare for an acute fuel shortage that is expected to last days amid the nation’s worst economic crisis in decades. The Public...
ASIA・2 DAYS AGO
Fortune

Sign up for the Fortune Features email list so you don’t miss our biggest features, exclusive interviews, and investigations. U.S. tariffs on Chinese imports survived a change in administration, but the trade-war-era levies may not survive record inflation. “We’re certainly looking at where we see costs being raised and,...
PRESIDENTIAL ELECTION・25 DAYS AGO

Silk Road founder Ross Ulbricht is forfeiting billions of dollars worth of Bitcoin (BTC) and other crypto assets to the US government. According to a new court filing, Ulbricht will relinquish any claim to over 69,000 BTC and undisclosed amounts of Bitcoin Gold (BTG), Bitcoin SV (BSV) and Bitcoin Cash (BCH) worth a combined $3 billion as part of a settlement.
PUBLIC SAFETY・26 DAYS AGO
Business Insider

MEXICO CITY — Mexican President Andrés Manuel López Obrador on Monday urged U.S. Latinos not to vote in November’s midterm elections for politicians who have “mistreated” them, in response to a comment by former U.S. President Donald Trump. Trump boasted at a rally in...
PRESIDENTIAL ELECTION・25 DAYS AGO

International order will be thrown out the window if Russia is able to escape consequences over its invasion of Ukraine, US Gen. Mark Milley told CNN.
POLITICS・25 DAYS AGO
Business Insider

The former F-35 test pilot Billie Flynn told The Aviationist that moving to the "cosmic spaceship" that is the F-35 was too much to ask of MiG pilots.
AEROSPACE & DEFENSE・26 DAYS AGO
Business Insider

"No one wants to see the outbreak of a third world war," Chinese Foreign Ministry spokesman Wang Wenbin told reporters during a briefing.
CHINA・25 DAYS AGO
US News and World Report

WASHINGTON (Reuters) - The United States on Tuesday offered a reward of up to $10 million for information on six people it described as Russian military intelligence officers who had conducted cyber attacks affecting critical U.S. infrastructure. The six officers work in a cyber-focused unit of Russia's Main Intelligence Directorate...
PUBLIC SAFETY・25 DAYS AGO
MarketWatch

TerraUSD USTUSD, -22.76% and LUNA LUNA, -4.26% are being falsely accused for what’s come to be known as the “crypto crash.” A good counterargument can be made that the real culprit is bitcoin’s. BTCUSD,. +0.91%. overvaluation. The notion that bitcoin’s fair value can even be calculated...
MARKETS・20 HOURS AGO
MarketWatch

Shares of Deere & Co. DE, -14.07% fell 1.8% toward a three-month low in premarket trading Friday, even after the agriculture, construction and forestry equipment maker reported fiscal second-quarter profit and revenue that rose above expectations, as "strong demand" helped offset supply-chain pressures. Net income increased to $2.10 billion, or $6.81 a share, from $1.79 billion, or $5.68 a share, in the year-ago period. The FactSet consensus for earnings per share was $6.69. Sales grew 10.9% to $13.37 billion, above the FactSet consensus of $13.23 billion. Cost of sales rose 12.5% to $8.92 billion, as gross margin contracted to 33.3% from 34.3%. Production & Precision Agriculture sales rose 13% to $5.1 billion, Small Agriculture & Turf sales increased 5% to $3.6 billion and Construction & Forestry sales rose 9% to $3.45 billion. The company affirmed the sales growth outlook for fiscal 2022. Deere's stock has gained 6.3% year to date through Thursday while the S&P 500.
STOCKS・1 DAY AGO
MarketWatch

Russia halted gas exports to neighboring Finland on Saturday, a highly symbolic move that came just days after the Nordic country announced it wanted to join NATO and marked a likely end to Finland’s nearly 50 years of importing natural gas from Russia. The measure taken by the Russian...
ENERGY INDUSTRY・15 HOURS AGO
MarketWatch

President Biden on Saturday signed legislation to support Ukraine with an additional $40 billion in U.S. assistance as the Russian invasion approaches its fourth month. The legislation, which was passed by Congress with bipartisan support, deepens the U.S. commitment to Ukraine at a time of uncertainty about the war’s future. Ukraine has successfully defended Kyiv, and Russia has refocused its offensive on the country’s east, but American officials warn of the potential for a prolonged conflict.
FOREIGN POLICY・20 HOURS AGO