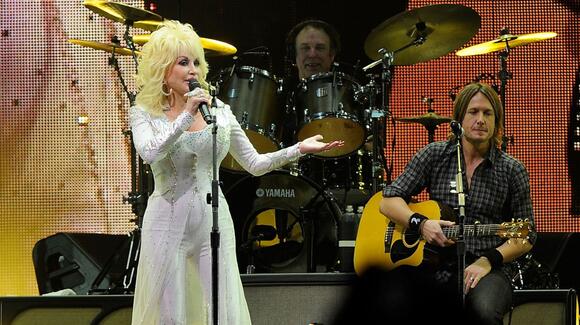 Dolly Parton has added a new title to her iconic resume: confectioner.

"Good Morning America" sat down virtually with Parton on Wednesday to find out all about her new line of Southern-inspired boxed cake mixes and asked; if she could pick one artist to bake and sing a duet with who it would be?

"Oh my goodness, that's a really good question. Any of the good lookin ones," she said with a laugh. "I love Keith Urban. I've always thought that he was one of the most talented and cutest guys in the world -- I'm not trying to hit on him, cause he's got Nicole [Kidman] and who could beat that, she's Jolene."

"I love his writing and I just think he's dear. He reminds me so much of my brothers and my own family from back home. He's from Australia but he has that feel of our mountain southern people -- he'd fit right in," she said. "I'd be happy to make a big ole cake for him and spend all afternoon singing songs."

Parton added that Urban "used to sing my songs with his friends back home in Australia -- he knows all my music and we love the same stuff. We could let Nicole sit over and listen to us sing. I'll fix [the cake] and she can serve it and have a piece."

The Tennessee native cooked up a bold, bright pink packaged line of cake mixes and frostings with Duncan Hines inspired by her roots and childhood recipes.

"I grew up in a very big family back in the country where women were always cooking for their families and churches with these beautiful cakes and wonderful southern dishes, so it was very natural for me cause I love to cook and I love to bake -- to start a line of Southern baking goods," Parton said. "Everybody loves banana pudding. That was always one of my favorite things, a big old bowl of banana puddin', so we thought it'd be nice to have a banana pudding cake."

She said that recipe brings her back "to being in the kitchen with my mom, my aunts, my grandma -- they were all great cooks -- I always related that to love and Sundays and church with singing."

Parton previously gave "Good Morning America" an inside taste of the sweet treats behind the food scenes at her eponymous amusement park. Watch how she helped concoct the tasty berry and lavender honey funnel cake at Dollywood here .

A limited number of Parton-adorned E-commerce kits will be available for $40 online starting Wednesday, including a collectible tea towel that reads "If you are what you eat, then why not be sweet." The kit also comes with a spatula, both mixes and frosting, recipe cards for two alternative recipes and a letter from the music legend herself.

Starting this March, the line will be available in the baking section of grocery stores and mass retailers.

The brand said this lineup is just the beginning of Parton's sweet new collaboration with more updates to come on social media.

In addition to this collaboration, "March is going to be a big month" she said, because "I have a new mystery novel with the famous James Patterson. And I have written a whole album by the same title called, 'Run Rose Run.' It's about a girl running from her past to head toward a future in Nashville -- you have to read the book to know, it's some heavy-duty stuff."

Princess Eugenie has taken to her Instagram Stories to make an exciting announcement related to The Anti-Slavery Collective, which she co-founded with her best friend Julia de Boinville back in 2017. Resharing a message from the charity organisation, the mother-of-one revealed she was posting "news from my charity". WATCH: Princess...
CELEBRITIES・27 DAYS AGO
People

Megan Fox wants her kids to express themselves however they please. In a wide-ranging interview with Glamour U.K. for their April cover story, the 35-year-old actress opens up about how she teaches her children, Journey River, 5, Bodhi Ransom, 8, and Noah Shannon, 9, about gender identity and encourages them to be confident in who they are.
FAMILY RELATIONSHIPS・26 DAYS AGO

A wedding caterer has been praised for turning down all events where the bride and groom are asking their guests to pay for their own meals.In a recent post shared on the discussion-based site Mumsnet, a user explained that they run a “wedding catering company” that is “based on a food truck” and works for “less formal weddings”.They then revealed that some couples who have reached out to them about catering have been expecting their guests to purchase their own dinners at their weddings, a concept that the caterer said they have been “turning down” because they believe it is...
RELATIONSHIP ADVICE・27 DAYS AGO
Us Weekly

Steve Ferdman/Shutterstock A perfect pair! Katherine Schwarzenegger shared a rare photo of her daughter Lyla as they shared a "dream" day together. "Just me and my girl, cuddling and playing with dolls and ponies," the Gift of Forgiveness author, 32, wrote via Instagram on Friday, May 20. "A dream come true." In the snaps, Schwarzenegger […]
CELEBRITIES・2 DAYS AGO
Hello Magazine

Sharon Osbourne, 69, lives with her husband Ozzy, 73, and their 11 pets in a vast LA mansion but with the Black Sabbath star's ongoing battle with Parkinson's Disease, it's looking like it's all change. The Sun has reported that The Talk star and her husband plan on overhauling a...
CELEBRITIES・27 DAYS AGO
Hello Magazine

The Today Show stars, including Hoda Kotb, Savannah Guthrie, and Craig Melvin, are reeling from the death of a beloved fellow Today host, one whose hiring onto the show made history at NBC studios. The co-hosts took a moment out of Monday morning's show to honor the legacy of Jim...
CELEBRITIES・27 DAYS AGO

Paulina Gretzky walked down the aisle in Vera Wang!. The bride shimmered during her wedding with pro golfer Dustin Johnson on Saturday at Tennessee's Blackberry Farm. Gretzky showed off the stunning look on Instagram Monday in a photo of the newlyweds kissing. "4/23/22♥," she simply captioned the post. For...
BEAUTY & FASHION・26 DAYS AGO
Popculture

90 Day Fiancé stars Anna-Marie Campisi and Mursel Mistanoglu have added a little boy to their family! The couple, who tied the knot on Season 7 of the TLC reality show, announced on Instagram this week that their son, Gokhan John, had been born via a surrogate on Monday, April 11 after the couple's initial struggle with fertility.
FAMILY RELATIONSHIPS・26 DAYS AGO
The Independent

A woman has revealed several “red flags” that she found in the apartment of the man she’s dating, which included two books about pregnancy and a woman’s ring.In a recent video shared to TikTok, Devin, @discoveringdevin, filmed herself sitting on a bed and putting her thumb down, as the text reads: “Red flags in his apartment.”She then began by showing four Apple MacBooks, all placed on top of each other, on a desk. “Four laptops…what are you hiding?” Devin wrote in the text over the clip.Next, she documented what appeared to be a “girl’s ring” on a white shelf....
RELATIONSHIP ADVICE・27 DAYS AGO
Outsider.com

Kate Hudson has realized one of her dreams and has taken to Instagram to share the incredible news with her 15 million followers. Sharing two pictures of her looking casual in a pair of baggy dip-dyed trousers and a white tank top, and singing into a microphone, the actress announced a surprising career change.
CELEBRITIES・27 DAYS AGO
Popculture

Spring is always a big time for engagements and weddings, and two beloved internet personalities are the latest to update their relationship status. On April 18, Rachel "Seltzer" Quirico revealed she and longtime boyfriend Trevor "TorcH" Housten were tying the knot after 17 years together. Both of them are beloved figures in the esports world, with Seltzer notably starring in the Syfy reality show WCG Ultimate Gamer. She's also hosted numerous esports tournaments and events for TV/streaming outlets; she also made a recent appearance on G4 TV's Boosted.
RELATIONSHIP ADVICE・27 DAYS AGO
PopCrush

90 Day Fiancé: Before the 90 Days star Johnny Chao is showing off a new look on social media. The reality TV star rocked a fresh-faced look on the show. However, Chao debuted some new facial hair in his most recent post on Instagram. More specifically, he grew a beard and mustache.
TV & VIDEOS・26 DAYS AGO
The Independent

Helen Skelton has revealed that she has separated from her husband, rugby player Richie Myler.The Countryfile host announced the news in an Instagram statement, writing that Myler has “left the family home”.Skelton’s announcement comes just four months after they welcomed their third child.“Very sad to say that Richie and I are no longer a couple,” she wrote. “He has left the family home. We will be doing our best to co parent our small children.”Skelton, who married Myler in 2013, accompanied the post with two broken heart emojis.The pair have three childen together: Ernie, aged six, Louis, aged...
CELEBRITIES・27 DAYS AGO

It seems Coi Leray is getting fed up with the drama. She and her father, Benzino, have not seen eye to eye for quite some time, and despite numerous attempts to mend their relationship, they keep ending up back at square one. Yesterday, 50 Cent, whose been feuding with Benzino...
CELEBRITIES・28 DAYS AGO
GMA

Leah Jeffries received support from Alexandra Daddario and Rick Riordan after her casting in the upcoming "Percy Jackson" series on Disney+ sparked backlash from fans.
CELEBRITIES・10 DAYS AGO
GMA

Blake Lively opened up about wanting to make her three daughters "proud" of everything she does.
FAMILY RELATIONSHIPS・2 DAYS AGO
GMA