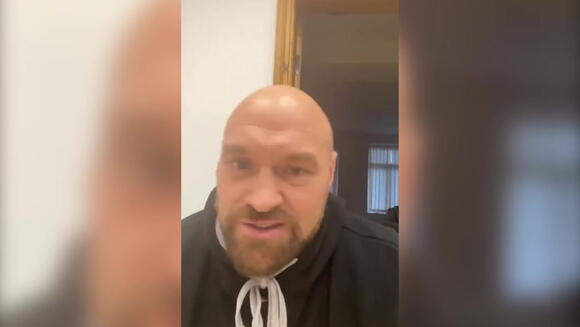 Oleksandr Usyk is certain to fight a British opponent next in 2022 - and a key deadline is fast-approaching which may finally determine whether it’s Tyson Fury or Anthony Joshua .

A rematch between Joshua and Usyk has been on the cards since immediately after their fight last autumn, which saw the Ukrainian triumph and AJ trigger his rematch clause.

However, there have been constant suggestions that Joshua would accept an offer to step aside and allow WBC champion Fury and IBF, WBA and WBO titles-holder Usyk to face off in an undisputed heavyweight title fight.

At present, there is no confirmed deal for either option and the current deadline set by the WBC is 6pm GMT on Wednesday, 26 January.

From then, purse bids will be called and any promoter will be able to enter negotiations to host the Fury vs Whyte fight, so if an agreement is to be reached for Joshua to step aside and an alternative match-up to be arranged, the clock is ticking on a handshake.

Indeed, Fury alluded to as much with his “tick f****** tick tock” message to Whyte, Joshua and Usyk on Tuesday.

“I am sick of looking at these bums and sick of listening to their excuses. Tick tick tock the time has run out of the bottle and you are all getting a good hiding, you cowards,” he said of the three fighters who had not yet sorted their own, and thus his, fighting futures.

Another video message saw him label them a “pack of wet lettuces” who each had excuses to not fight him, and who he claimed he would “annihilate” in turn.

The WBC have already extended their deadline for an agreement to be reached once and, currently at least, there is no suggestion another extension will be provided.

Tony Bellew won the vacant WBC world cruiserweight title on this day in 2016.The Liverpudlian, a staunch Everton fan, claimed the belt with a third-round knockout of Ilunga Makabu at Goodison Park.Bellew got the chance to fight for the title after reigning champion Grigory Drozd vacated it due to injury, but it looked like Makabu might win after sending the home favourite to the canvas in the third round.But Bellew recovered and delivered a barrage of left hooks in the third round that floored Makabu, with the referee intervening.It was a glorious moment for Bellew, who won a world title...
COMBAT SPORTS・4 HOURS AGO
The Independent

Real Madrid keeper Thibaut Courtois called for people to put “respect on my name” after inspiring his side to a Champions League final victory over Liverpool.The Belgian shot-stopper produced a remarkable display to keep Liverpool at bay as the Spanish champions clinched a 1-0 win and with it their 14th European title.And Courtois, who spent five years at Chelsea, admitted after the victory that he was inspired by criticism from those in England.Speaking to BT Sport, he said: “Yesterday in the press conference I said that when Madrid plays finals they win. I was on the good side of...
PREMIER LEAGUE・11 HOURS AGO