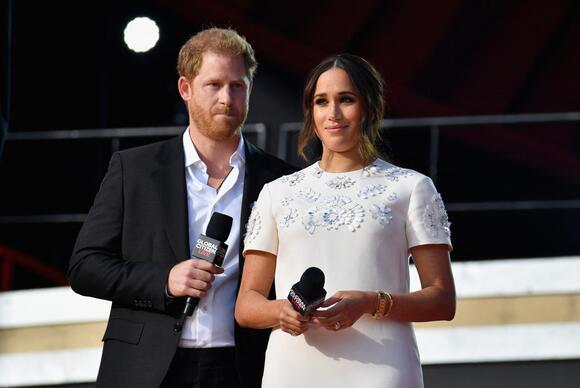 Spotify is looking to hire new producers to work on an untitled podcast under its deal with the Duke and Duchess of Sussex after releasing just one episode more than a year ago.

The couple signed an exclusive multi-year deal with the streaming giant in 2020 on behalf of their newly formed production company , Archewell Audio.

However, to date they have only released a single episode as part of the partnership: a holiday special featuring a series of high-profile contributors, including Sir Elton John and James Corden.

Now, Spotify is advertising for producers to work on its Gimlet Projects arm to work with Archewell Audio.

“We’re currently assembling a show team that will build and launch a new original show with Archewell featuring the voices of high profile women,” reads the job specification.

“We’re looking for an experienced senior producer to help us develop and launch an exciting new weekly show based in Los Angeles.

“The senior producer will be involved with every step of the show including development, research, and producing episodes.”

It added that it was looking for someone with “strong editorial judgement” and a “background in audio storytelling”.

It’s not yet clear how involved Harry and Meghan will be with the new show.

However, Meghan has previously spoken about her excitement for Archewell Audio in a trailer for the Christmas special.

“We’re talking to some amazing people, they’re going to share their memories that have really helped shape this past year which has been, as we know, a difficult one for everyone,” she said.

Harry added: Prince Harry said: “So many people have been through so much pain this year, experiencing loss, a huge amount of uncertainty, but it feels worth acknowledging that 2020 has connected us in ways we could have never imagined, through endless acts of compassion and kindness.”

Robin Roberts got emotional as she opened up about her relationship with partner Amber Laign, especially in the midst of a challenging health battle. The Good Morning America star made an appearance on The Ellen DeGeneres Show to promote her new book, Brighter By the Day. VIDEO: Robin Roberts enjoys...
CELEBRITIES・20 DAYS AGO
Insider

According to Tina Brown's new book, "The Palace Papers," Prince William was aware of his status as future king from a young age.
CELEBRITIES・19 DAYS AGO
American Songwriter

Gene Simmons of Kiss and several other musicians are beginning to react to the news of Elon Musk’s purchase of Twitter for $44 billion, questioning Musk’s desire for more “free speech” and how it may impact the spread of more hate and misinformation. “Fantastic news, at...
BUSINESS・19 DAYS AGO
Fox News

Prince Harry and his wife Meghan Markle "were really stunned" after the royal family "shut the door" following their decision to step back from "The Firm." The claim was made by a former adviser to former Vanity Fair editor Tina Brown, who has written a new book about the British royal family coming out on April 26 titled "The Palace Papers: Inside the House of Windsor – the Truth and the Turmoil."
CELEBRITIES・20 DAYS AGO

Hoda Kotb took to social media to show her support for her co-star and close friend Jenna Bush Hager as she embarked on a brand new adventure. The Today host shared a snapshot of her co-host's book tour schedule, which took her around the country to talk about her latest release with sister Barbara P. Bush.
CELEBRITIES・21 DAYS AGO
Hello Magazine

Princess Eugenie has taken to her Instagram Stories to make an exciting announcement related to The Anti-Slavery Collective, which she co-founded with her best friend Julia de Boinville back in 2017. Resharing a message from the charity organisation, the mother-of-one revealed she was posting "news from my charity". WATCH: Princess...
CELEBRITIES・19 DAYS AGO
People

Megan Fox wants her kids to express themselves however they please. In a wide-ranging interview with Glamour U.K. for their April cover story, the 35-year-old actress opens up about how she teaches her children, Journey River, 5, Bodhi Ransom, 8, and Noah Shannon, 9, about gender identity and encourages them to be confident in who they are.
FAMILY RELATIONSHIPS・19 DAYS AGO
The Independent

Mark Hamill has revealed he lost thousands of followers on Twitter in the space of a few hours yesterday (25 April).While the exact reason for the exodus has not been confirmed, his tweet came shortly after it was announced that Elon Musk is set to purchase the social media platform in a deal worth $44bn.Since the news broke, many users of the site (including Jameela Jamil) have announced their intention to delete their accounts, owing to Musk’s reputation as a politically controversial figure. It is believed this could be the reason for Hamill’s loss in followers.“Weird. I just lost...
CELEBRITIES・20 DAYS AGO

The show — and the vacation — must go on. Jada Pinkett Smith determined that the family trip to India wasn't going to be canceled due to Will Smith's Oscars slap. "Will and Jada have taken the family on [a] vacation that was already planned," a source exclusively tells Us Weekly. The Concussion star, 53, […]
CELEBRITIES・21 DAYS AGO
Hello Magazine

Kate Hudson has realized one of her dreams and has taken to Instagram to share the incredible news with her 15 million followers. Sharing two pictures of her looking casual in a pair of baggy dip-dyed trousers and a white tank top, and singing into a microphone, the actress announced a surprising career change.
CELEBRITIES・20 DAYS AGO
TVLine

TV Bloodbath: 17 Shows Cancelled in 48 Hours — Which Cut Hurt the Most?

Click here to read the full article. Well, that was brutal. A total of 17 broadcast series were laid to rest over the past 48 hours as the broadcast networks began cleaning house in advance of next week’s fall presentations (aka the “Upfronts”). The body count was highest at about-to-be-sold The CW, which axed seven series this week, including Legacies, Charmed, 4400, Naomi, Roswell, New Mexico, In the Dark and Dynasty. CBS shuttered nearly a half dozen programs, including Magnum P.I, B Positive and Good Sam, while NBC pulled the plug on three (including comedies Mr. Mayor and Kenan). Fox, meanwhile, parted ways with...
TV SERIES・2 DAYS AGO
hotnewhiphop.com

50 Cent cast doubt on Megan Thee Stallion's recent comments about not having been in an “intimate relationship” with Tory Lanez, prior to the infamous shooting in July 2020 which left her with gunshot wounds. Megan's comment came during a recent interview with Gayle King, during which she...
CELEBRITIES・19 DAYS AGO

Dorsey, who was CEO of the company until November 2021, took to the platform to pen his thoughts on the new changes.
BUSINESS・19 DAYS AGO
The Independent

A woman has revealed several “red flags” that she found in the apartment of the man she’s dating, which included two books about pregnancy and a woman’s ring.In a recent video shared to TikTok, Devin, @discoveringdevin, filmed herself sitting on a bed and putting her thumb down, as the text reads: “Red flags in his apartment.”She then began by showing four Apple MacBooks, all placed on top of each other, on a desk. “Four laptops…what are you hiding?” Devin wrote in the text over the clip.Next, she documented what appeared to be a “girl’s ring” on a white shelf....
RELATIONSHIP ADVICE・20 DAYS AGO
Popculture

Spring is always a big time for engagements and weddings, and two beloved internet personalities are the latest to update their relationship status. On April 18, Rachel "Seltzer" Quirico revealed she and longtime boyfriend Trevor "TorcH" Housten were tying the knot after 17 years together. Both of them are beloved figures in the esports world, with Seltzer notably starring in the Syfy reality show WCG Ultimate Gamer. She's also hosted numerous esports tournaments and events for TV/streaming outlets; she also made a recent appearance on G4 TV's Boosted.
RELATIONSHIP ADVICE・20 DAYS AGO
realitytitbit.com

The patients on TLC’s My 600-Lb Life are determined to regain control of their lives. Many of the people who have appeared on the show turn to food for comfort or as a coping mechanism for traumatic things they’ve experienced. Many of the stories detail events that happened in the patients’ childhood but with the help of Dr Now, a Texas-based gastroenterologist, some are able to change their lives for the better.
WEIGHT LOSS・4 DAYS AGO
Outsider.com

Sharon Osbourne, 69, lives with her husband Ozzy, 73, and their 11 pets in a vast LA mansion but with the Black Sabbath star's ongoing battle with Parkinson's Disease, it's looking like it's all change. The Sun has reported that The Talk star and her husband plan on overhauling a...
CELEBRITIES・20 DAYS AGO
inputmag.com

Elon Musk, the world’s wealthiest man, who thinks tunnels are immune to natural disasters, is purchasing Twitter. The company confirmed on Monday afternoon that it had accepted the billionaire’s offer. “Twitter, Inc. today announced that it has entered into a definitive agreement to be acquired by an entity wholly owned by Elon Musk, for $54.20 per share in cash in a transaction valued at approximately $44 billion,” reads the official press release. “Upon completion of the transaction, Twitter will become a privately held company.”
BUSINESS・20 DAYS AGO
hotnewhiphop.com

It seems Coi Leray is getting fed up with the drama. She and her father, Benzino, have not seen eye to eye for quite some time, and despite numerous attempts to mend their relationship, they keep ending up back at square one. Yesterday, 50 Cent, whose been feuding with Benzino...
CELEBRITIES・21 DAYS AGO