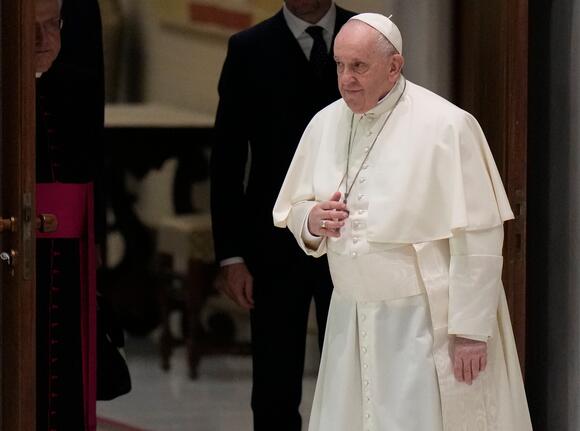 Pope Francis said Wednesday he is suffering from an inflamed ligament in his right knee that makes walking and going up and down stairs painful.

Francis told his weekly general audience that he had been informed that the inflammation usually only afflicts older people.

“I don’t know why it happened to me,” the 85-year-old pope quipped, drawing applause from the crowd.

Francis, who has long suffered from sciatica nerve pain that makes him walk with a pronounced limp, cited the new knee pain in explaining why he wouldn’t go down the steps of the Vatican audience hall to greet the pilgrims in the crowd. Instead, a handful of guests were brought up to the stage.

Francis had mentioned the leg pain last week in explaining that he would remain seated during a different audience. Over the years, he has apologized when he has missed liturgies or had to sit down during events that would otherwise require him to stand.

The Argentine Jesuit enjoys generally good health, though he had 33 centimeters (13 inches) of his large intestine removed last July. Francis also had a part of one lung removed when he was a young man after a respiratory infection.

Dr Anthony Fauci has issued a stark warning that society is in “decline” because of the spread of disinformation and propaganda.The nation’s top infectious disease expert told graduates of Roger Williams University on Friday that the Covid-19 pandemic had laid bare the “normalisation of untruths” and the “divisiveness” across the US.He urged the audience to “reject the politicisation of science” and the “outright lies” that pose a “danger” to the country.“It is our collective responsibility to not tacitly accept the normalisation of untruths because, if we do, we invite dangers to ourselves, our families, our communities and our country,”...
EDUCATION・1 DAY AGO
The Associated Press

VATICAN CITY (AP) — The Vatican’s sprawling financial trial may not have produced any convictions yet or any new smoking guns as prosecutors work through a first round of questioning of the 10 suspects accused of fleecing the Holy See of tens of millions of euros. But testimony...
WORLD・2 HOURS AGO
The Independent

When a gunman began shooting at a Taiwanese American church luncheon, Shoei Su said he froze.The retired appraiser uses a walker and said he and many of the elderly congregants didn't immediately know what was happening. He said the shooter said nothing before firing on churchgoers who were snapping photos after finishing lunch following last Sunday morning's prayer service.Nearly a week later, Su said he can't sleep and is struggling to heal from the attack that killed one and wounded five in the close-knit congregation in the Southern California community of Laguna Woods, which is made up largely of...
CALIFORNIA STATE・10 HOURS AGO