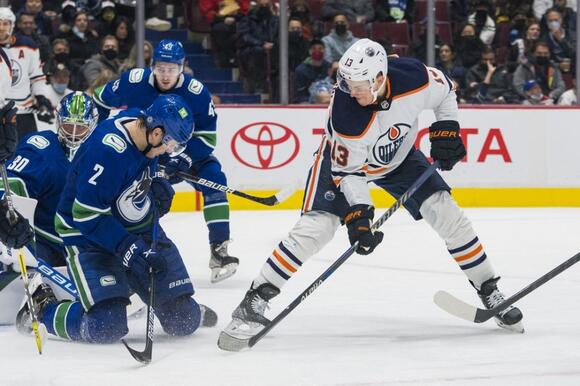 Connor McDavid scored with 24 seconds left in overtime to give the visiting Edmonton Oilers a 3-2 comeback victory over the Vancouver Canucks on Tuesday.

McDavid notched his 20th goal of the season when he drove to the net and chipped home the pass from Darnell Nurse.

Ryan McLeod and Leon Draisaitl also scored in the win in the third period as Edmonton overcame a 2-0 deficit.

Mikko Koskinen made 25 saves for the Oilers, his biggest a breakaway stop on Tyler Motte moments before the game-tying tally in the third period. The Oilers have won two straight games following a seven-game losing streak.

Elias Petterssen and Motte scored for the Canucks, who are 0-1-2 in their past three games and 2-4-2 in their past eight. Spencer Martin, in the net while Vancouver’s top two goalies are COVID-19 protocol, stopped 47 shots — eight of them in overtime — but it wasn’t enough.

With his team trailing 2-0, McLeod gave the visitors a much-needed jolt at 6:33 of the third period when he zipped down the wing and found the mark from a sharp-angle for his fifth of the season.

Draisaitl’s 29th goal of the season evened the game just past the midway point of the third period. Draisaitl set up at the right circle and one-timed Ryan Nugent-Hopkins’ cross-ice pass to make it 2-2.

Vancouver had a golden chance to win thanks to a pair of late second-period goals. Pettersson’s 10th goal of the season opened the scoring at 14:26 of the frame. Pettersson gained the puck inside his own blue line, raced up the left side, and while using Oilers defenseman Cody Ceci as a screen, fired a top-shelf wrist shot.

The Oilers have surrendered the first goal in 16 of their past 17 outings.

Motte’s short-handed tally doubled the lead with 2:47 remaining in the second period. J.T. Miller first prevented McDavid from burying a shot in a wide-open net and promptly sent Motte on a breakaway, which he converted for his fifth of the campaign.

But despite Martin’s heroics, the hosts couldn’t hold the lead.

Off the ice, the Canucks reportedly will announce on Wednesday that Patrik Allvin is the new general manager. Allvin has been with the Pittsburgh Penguins since 2006, most recently serving as assistant general manager. Jim Rutherford, the current president of hockey operations in Vancouver, worked with Allvin in Pittsburgh.

Zach Hyman scored the game-winning goal with Edmonton short-handed midway through the third period, and the Oilers evened their Western
NHL・7 HOURS AGO
Sportsnaut

The NHL season officially started back on October 12. In this article, we track all the NHL games today as
MLS・2 HOURS AGO
Sportsnaut

The St. Louis Blues elevated their play to earn a split following their first two games of their Western Conference
SAINT LOUIS, MO・17 HOURS AGO

Nothing gets the people going quite like the Stanley Cup Playoffs. Find out how to live stream every NHL Playoff game here.
NHL・20 HOURS AGO
Sportsnaut

The St. Louis Cardinals are undertaking a youth movement during their road series this weekend against the Pittsburgh Pirates, but
SAINT LOUIS, MO・2 HOURS AGO
Sportsnaut

Tampa Bay Lightning forward Brayden Point has been ruled out for Game 2 of the Eastern Conference semifinal series against
TAMPA, FL・2 DAYS AGO
Sportsnaut