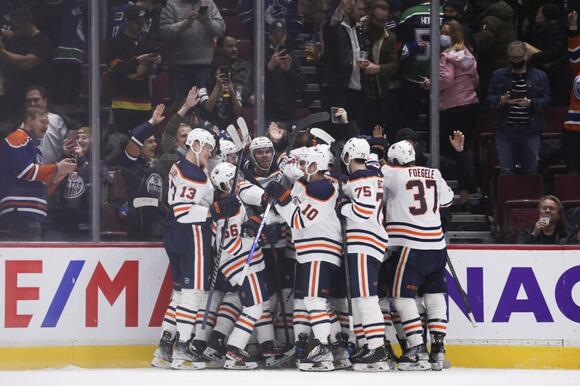 With just 23.4 seconds left in overtime, the Edmonton Oilers' captain tapped in a Darnell Nurse pass from the top of the crease to secure a 3-2 comeback win over the Vancouver Canucks.

It was the superstar center’s 20th goal of the season and his first in six games.

“I’ve been a bit snakebit,” McDavid said. “I feel like I’m getting my chances but I haven’t been able to put one away, so it was nice to be able to contribute and find a way to score a goal.”

The Oilers outshot the Canucks 50-27 but struggled to get pucks past Vancouver goalie Spencer Martin until midway through the third period.

The 26-year-old netminder stopped 47 shots in just his second NHL game of the season and fifth of his career. He was pressed into action after both Canucks all-star Thatcher Demko and backup Jaroslav Halak were added to the NHL’s COVID-19 protocol.

Martin may not be a household name, but McDavid said he remembered playing against him in both the Greater Toronto Hockey League and junior hockey.

“He was kind of one of those guys where you’re just waiting for him to make it to the NHL and for goalies it takes a little while longer,” McDavid said. “And it seems like he needed a bit of a break and with the COVID bug going around it seemed like that’s kind of his break and he’s played well. He’s played really well.”

Mikko Koskinen had 25 saves for the Oilers, who’ve now won back-to-back games for the first time since Dec. 18.

Ryan McLeod finally got Edmonton on the board and Leon Draisaitl added a power-play goal to knot the score at 2-2.

Tyler Motte, with a short-handed tally, and Elias Pettersson scored for Vancouver, while Martin had 47 saves.

Draisaitl nearly ended the game earlier in overtime, slipping around Brock Boeser near the boards and getting a clean shot off from in tight but Martin was there to make the stop.

The German sniper forced extra time, evening the score 10:24 into the third. He blasted a one-timer past Martin for his 29th goal of the season.

The Oilers came into the game boasting the league’s best power play (30.5%) and were 1-for-4 with the man advantage. The Canucks came in with the worst penalty kill in the NHL (67%) and were scoreless on their lone power play.

“They’ve worked hard at it, they want to get better at it,” he said. “And we told them today that the first half is over, let’s forget about it, let’s start worrying about the second half and see how we can be there.

“And they rose to the occasion and did a good job penalty killing.”

Edmonton got on the board 6:33 into the third when McLeod unleashed a rocket from the bottom of the faceoff circle and his shot squeaked between Martin and the post.

The goal, McLeod’s fifth of the season, prompted cheers of “Let’s go Oilers!” from the Edmonton fans littered around Rogers Arena.

Moments later, Pettersson ripped a shot from the top of the faceoff circle, clanking it off the far post and in for his 10th goal of the season.

Canucks: At Winnipeg on Thursday to start a four-game trip.