Rookie Jonathan Kuminga explodes in second half vs. Mavericks 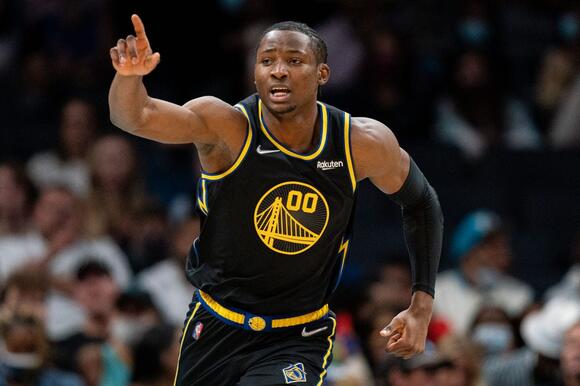 Want a read on how Tuesday night’s Warriors game was going against the Dallas Mavericks? Just check out the cheshire cat grin on Jonathan Kuminga’s face following his fourth-quarter dunk.

The Warriors have been struggling offensively over the past few weeks but good vibes were back at Chase Center Tuesday night. Klay Thompson was in rhythm, the offense was flowing and Kuminga was living above the rim. It all added up to a 130-92 victory, Golden State's third-largest of the season.

With about seven minutes left in Tuesday’s contest, Kuminga rose up for a huge one-handed hammer and tacked on an and-one free throw for fun.

"Because the floor was spaced and had a good flow to our game, Jonathan was able to use his athleticism and his speed and free himself," Warriors coach Steve Kerr said. "You can see just how powerful he is as an athlete. How explosive he is, it’s fun to see. That transition dunk was just spectacular."

Kuminga has thrown down some major hammers throughout his rookie season, but said Tuesday's dunk was his top slam so far. Even he had to stop and stare at the big screen afterwards.

The next time down the floor he delivered a two-handed slam before hitting a trifecta the next possession. Eight quick points in 57 seconds.

Kuminga continues to shine in the second half of his rookie season and looks supremely confident with his 3-point stroke. Kuminga finished with a team-high 22 points and five rebounds in 18 minutes while shooting 8-of-9 from the floor with a perfect 4-of-4 from 3-point land.

"I've been working on my shot since I got drafted here," Kuminga said. "Because the way we play, the way the ball moves and the people we've got on the floor, they're always going to driving, or if they go in to kick out, you're always going to be wide-open."

Kuminga must have known it was his night when his last shot of the evening rattled around the rim before sinking in the net. He could only shrug and smile after his near-perfect performance.

"It's good to see him out there competing and playing hard, seeing him on the court, showing his ability and playing with a lot of confidence," guard Jordan Poole said. "We know he's extremely athletic, but getting him to make the right plays, take the right shots and the easy shots for him. Because we have so many threats out there that we'll be able to give him some easy looks."

Kuminga may have lost a grip on the starter's role he seized with Draymond Green's injury earlier this month, but is still clearly capable of being a game-changer off the bench. Kerr said Kuminga is still on a rookie learning curve, though.

Otto Porter Jr. got the start at power forward, alongside Steph Curry, Thompson, Andrew Wiggins and Kevon Looney. Kuminga might not reclaim a starting role while Green is gone, but it seems like he has no problem producing off the bench.

"One of the reasons we’ve brought him along slowly is he’s gotta learn those things before we can really trust him to play big minutes," Kerr said. "In my mind, it’s a really organic, natural way to bring a young player along. Rather than just hand him minutes, he’s gotta earn them by making the right plays and the right reads."

After becoming one of five NBA players to appear in all 82 regular season games, Kevon Looney’s epic 22-rebound performance is a reminder of his value to the Warriors.
SAN FRANCISCO, CA・2 DAYS AGO
95.7 The Game

Bonta Hill and Joe Shasky of 95.7 The Game’s ‘The Morning Roast’ had some fun revisiting some hot takes from Nick Wright and Skip Bayless from FS1.
SAN FRANCISCO, CA・2 HOURS AGO
95.7 The Game

The Athletic’s Anthony Slater joined 95.7 The Game’s “Damon & Ratto” to break down the physical challenge Jordan Poole potentially faces against the Dallas Mavericks in the Western Conference Finals.
SAN FRANCISCO, CA・2 DAYS AGO
95.7 The Game

Luka Doncic and Jason Kidd shared their thoughts on the Warriors defense after Golden State dominated in a 112-87 win over the Mavericks in Game 1 of the Western Conference Finals.
SAN FRANCISCO, CA・1 DAY AGO
95.7 The Game

Warriors forward Andrew Wiggins played a starring role in shutting down Luka Doncic as Golden State cruised to a 112-87 win over the Dallas Mavericks in Game 1 of the Western Conference Finals.
SAN FRANCISCO, CA・1 DAY AGO
95.7 The Game