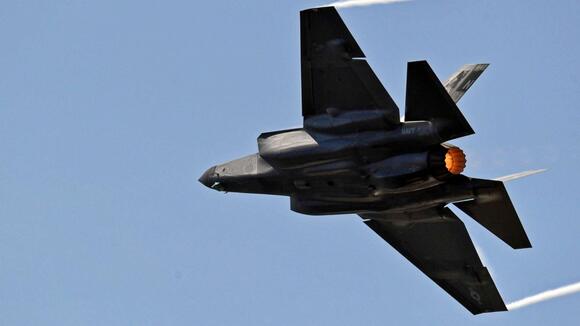 The U.S. Navy has begun to make plans to recover the F-35C fighter jet that crashed Monday after striking the deck of an aircraft carrier in the South China Sea. The jet is the most advanced stealth fighter jet in the world and would have made an enticing target for China if it had attempted to recover it from the depths of the Pacific Ocean.

"The U.S. Navy is making recovery operations arrangements for the F-35C aircraft involved in the mishap aboard USS Carl Vinson (CVN 70) in the South China Sea Jan. 24.," said Brenda Way, a spokesperson for the Navy's Pacific Fleet.

An earlier Navy statement had said that as the F-35 was attempting to land on the aircraft carrier Monday, "It impacted the flight deck and subsequently fell to the water during routine flight operations."

Seven sailors, including the pilot who was able to eject safely, were injured in Monday's crash according to the Navy.

The damage to the carrier's deck was "superficial and all equipment for flight operations is operational," which enabled the resumption of flight operations, said Lt. Mark Langford, a Seventh Fleet spokesman.

The crash of one of the most advanced fighter jets in the world into international waters had fueled speculation that the U.S. Navy might quickly launch a salvage operation to prevent other foreign powers, especially China, from trying to do the same.

"The race is on now to get the appropriate kind of recovery gear, the deep diving submersibles that actually pull the wreckage up off the bottom of the ocean," said Steve Ganyard, a retired Marine aviator and ABC News contributor.

Ganyard believes China probably has a general idea of where the jet entered the waters of the South China Sea, making its advanced stealth technology an enticing target for China to launch its own salvage operation.

"The Chinese have it the U.S. Navy has it," said Ganyard. "Both those countries are going to want to get a hold of this wreckage."

It is unclear how deep the waters are where the F-35 fell into the Pacific, but the Navy has considerable experience in salvaging wreckage in deep waters. A salvage operation in 2019 in the Philippine Sea was able to recover a C-2A Greyhound aircraft that was three miles under the ocean.

While Monday's crash marked the Navy's first F-35C crash at sea, it will not be its first operation to salvage an F-35 aircraft.

Late last year, the U.S. Navy helped the British Royal Navy recover an F-35B fighter from the waters of the Mediterranean after it had crashed on takeoff from the aircraft carrier HMS Queen Elizabeth.

The participation of so many air capable and amphibious U.S. Navy ships operating together in the South China Sea highlights the U.S. Navy's capabilities in a region where China continues to make maritime territorial claims.

If the US Navy can't recover this F35C, then ought to send down enough ordinance to completely destroy it

A top US official in the Pacific has warned that America would have to “respond” if the Solomon Islands allows China to establish a military base there.Following a “constructive and candid” 90-minute meeting with prime minister Manasseh Sogavare, ambassador Daniel Kritenbrink said that the security deals between China and the Solomon Islands present “potential regional security implications” for the US and other allies.“We wanted to outline for our friends in the Solomons what our concerns are,” Mr Kritenbrink, US assistant secretary for East Asian and Pacific Affairs, told reporters.“We have respect for the Solomon Islands’ sovereignty. But we also...
FOREIGN POLICY・27 DAYS AGO
Newsweek

A plethora of downright bizarre scientific research from the Department of Defense previously kept under wraps has been uncovered, revealing an array of peculiar schemes proposed by the United States military. One outlandish proposal suggested detonating nuclear bombs on the moon to create a tunnel through it. Millions in taxpayer dollars were spent on the research, which appears to have relied on a contractor, Bigelow Aerospace Advanced Studies, which was owned by multi-millionaire Robert Bigelow, a hotel impresario. The public was kept in the dark until now regarding what research was being funded.
ASTRONOMY・27 DAYS AGO
Business Insider

The former F-35 test pilot Billie Flynn told The Aviationist that moving to the "cosmic spaceship" that is the F-35 was too much to ask of MiG pilots.
AEROSPACE & DEFENSE・28 DAYS AGO

A junior soldier assigned to 7th Infantry Division at Joint Base Lewis-McChord, Washington, died Monday and two more were injured in a single-vehicle accident during a training exercise, a division spokesperson said. Pfc. Joseph A. Marquez, from Dover, Delaware, was killed in the Yakima Training Area mishap, according a release...
DOVER, DE・27 DAYS AGO
Fox News

A superyacht worker claims the vessel’s captain once had to deploy sonic weapons against Kalashnikov-wielding pirates on inflatable boats in the Arabian Sea. The episode was one of many surreal scenes an anonymous worker detailed in a piece published Sunday in The Times of London. The captain, according to...
PUBLIC SAFETY・28 DAYS AGO
US News and World Report

WASHINGTON (Reuters) - The United States on Tuesday offered a reward of up to $10 million for information on six people it described as Russian military intelligence officers who had conducted cyber attacks affecting critical U.S. infrastructure. The six officers work in a cyber-focused unit of Russia's Main Intelligence Directorate...
PUBLIC SAFETY・27 DAYS AGO

EXPLAINER: What’s the 4-nation Quad, where did it come from?

TOKYO (AP) — Leaders of the U.S., Japan, Australia and India gathered in Tokyo on Tuesday for a summit of the “Quad.” What is the group, where did it come from and why do diplomats keep coming up with strange names for various partnerships?. WHAT IS THE...
WORLD・57 MINUTES AGO