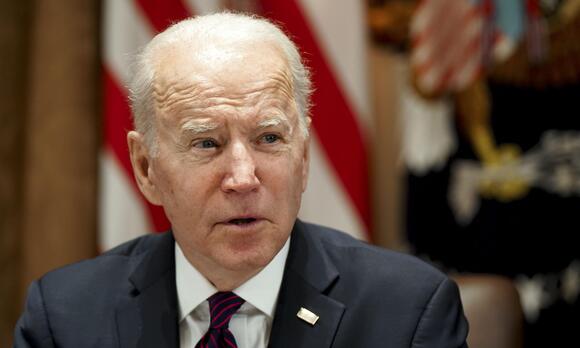 Joe Biden has said he will consider personal sanctions against Vladimir Putin if Russia invades Ukraine, as western leaders step up military preparations and make plans to shield Europe from Russian gas being cut off.

The rare sanctions threat came as Nato placed forces on standby and reinforced eastern Europe with more ships and fighter jets in response to Russia’s troop buildup near its border with Ukraine.

If Russia attacked, Biden said, it would be the “largest invasion since world war two” and would “change the world”. The president said he would consider adding direct sanctions on Putin to a raft of measures being drawn up.

Related: The Guardian view on the threat to Ukraine: high and rising | Editorial

“Yes. I would see that,” Biden said when asked by reporters in Washington about targeting Putin, whom opponents have long accused of holding gigantic secret wealth.

Russia denies planning an attack and says the crisis is being driven by Nato and US actions. It is demanding security guarantees from the west including a promise by Nato never to admit Ukraine as a member. Moscow sees the former Soviet republic as a buffer between Russia and Nato countries.

Efforts to resolve the tensions diplomatically have continued, with officials from France, Germany, Russia and Ukraine expected to meet in Paris on Wednesday.

The threat of sanctions on Putin came as the US helped prepare for the diversion of natural gas supplies from around the world to Europe in the event that the flow from Russia is cut, in an effort to blunt Putin’s most powerful economic weapon.

US officials said on Tuesday that they had been negotiating with global suppliers and were confident that Europe would not suffer from a sudden loss of energy for heating in the middle of winter.

“To ensure Europe is able to make it through the winter and spring we expect to be prepared to ensure alternative supplies covering a significant majority of the potential shortfall,” a senior official said.

The preparation for bulk gas deliveries is part of a campaign by the US and its European allies to show a united and coherent front to Putin. Boris Johnson hinted that Germany was concerned about the imposition of sanctions against Russia because of its dependence on Russian gas and told MPs diplomatic efforts were being made to persuade Berlin and others to go further.

The British prime minister said that “European friends” had concerns about imposing the toughest possible sanctions on Moscow because of their “heavy dependence” on Russian gas – and also declared the UK would be willing to deploy more troops to eastern Europe if Ukraine was attacked.

His comments came as the French president, Emmanuel Macron, and Olaf Scholz, the new German chancellor, met in Berlin on Tuesday to coordinate their stances after reports of rifts among the allies.

Macron said he was due to speak by phone with Putin on Friday to “clarify” the Russian position. He said France and Germany would never abandon dialogue with Russia, but added: “If there is aggression, there will be retaliation and the cost will be very high.”

The Russian military announced it would carry out a new set of military exercises involving 6,000 troops near the Ukrainian border, and within Crimea, the Ukrainian peninsula that Moscow annexed in 2014. The drills would include exercises with live ammunition and feature fighter jets, bombers, anti-aircraft systems and vessels from Russia’s Black Sea and Caspian fleets, the defence ministry said.

Ukrainian leaders called for calm, with the defence minister, Oleksii Reznikov, telling parliament that an invasion was not imminent. He said the Russians had yet to form a combat battle group of the sort it would need, and “as of today, there are no grounds to believe” Russia would invade imminently.

“Don’t worry, sleep well,” he said. “No need to have your bags packed.”

Russia has already restricted the flow of natural gas through the pipeline running through Ukraine from about 100m cubic metres a day to 50m, US officials have said. Washington estimates that almost all of that can be replaced quickly if the pipeline is cut deliberately or as a result of conflict. If gas were to be diverted to Europe it would largely have to be in the form of liquified natural gas (LNG), but at present the entire global market in LNG would not be sufficient to make up the shortfall.

The US also said it was preparing restrictions on exports to Russia of hi-tech software and hardware made by the US and its allies. Officials said the measures would affect Russian ambitions in the fields of aerospace, defence, lasers and sensitive maritime technology, artificial intelligence and quantum computers.

“When we pick these sectors, it’s quite deliberate,” an official said. “These are sectors that Putin himself has championed, as the way forward for Russia to diversify its economy beyond oil and gas. And so that would lead to an atrophying of Russia’s productive capacity over time.”

Meanwhile the flow of arms to Ukraine accelerated. US officials confirmed that a plane carrying hundreds of anti-tank Javelin missiles had arrived in Kyiv and a shipment of more was ready to go from Estonia.

“On the Javelins, this is decided and we have the endorsement from the US, so it’s just a matter of time when we’re going to send them out,” an Estonian official said, adding they would be sent “as soon as possible”.

The Estonian government also intended to sent howitzer guns to Ukraine but was waiting on approval from Germany, where the guns originated, and from Finland, which supplied some of the guns to Estonia.

Latvia and Lithuania are supplying Stinger anti-aircraft missiles to Ukraine. The UK has sent 2,000 anti-tank missiles and Saxon armoured cars, and Turkey has supplied Bayraktar drones.

Reuters and Agence France-Presse contributed to this report

Go ahead sanction Russia! I don’t think Putin care. Why is our government keeps stealing from futures generation and tax Americans peoples to death to spend 770 billion dollars on military to police the world when we have starving children and homeless in America and open borders. But worry about Ukraine borders. Leave Ukraine alone and Russia alone

My daughter, Elizabeth Rose, who has died aged 33 from the effects of Crohn’s disease, was a talented artist and curator and disability advocate who documented her illness on social media. Elizabeth developed Crohn’s in her teenage years and thereafter led an extraordinary artistic life, despite the steady progression...
OBITUARIES・2 DAYS AGO
The Guardian

Pennsylvania Republicans have nominated state senator Doug Mastriano to be the next governor. Mastriano is one of the most radical gubernatorial candidates ever to receive a major party nomination. Many Republicans have indulged Trump’s claims that Democrats stole the 2020 presidential election. But few have gone as far as Mastriano...
PENNSYLVANIA STATE・3 DAYS AGO
The Guardian

The exponential increase in saltwater crocodile populations in the Northern Territory in recent decades may be partly a result of them preying on feral pigs, new research suggests. Scientists who have analysed the diets of saltwater crocodiles in the Territory believe the reptiles have shifted from marine prey to predominantly...
ANIMALS・26 DAYS AGO
Business Insider

The intelligence the U.S. shared with Ukraine helped it continue to resist Russian invading forces and even shoot down a transport plane carrying hundreds of Russian troops, a new report revealed. According to current and former U.S. officials who spoke with NBC News on Tuesday, the U.S. provided critical intelligence...
MILITARY・26 DAYS AGO
The Independent

International order will be thrown out the window if Russia is able to escape consequences over its invasion of Ukraine, US Gen. Mark Milley told CNN.
POLITICS・26 DAYS AGO

Greene testified on Friday that she didn't recall whether she asked Trump to invoke military rule, despite telling Meadows to relay the idea to Trump.
ATLANTA, GA・27 DAYS AGO
Newsweek

Sign up for the Fortune Features email list so you don’t miss our biggest features, exclusive interviews, and investigations. Two Russian oligarchs found dead alongside their families within 48 hours of each other are the latest high-profile executives to die in mysterious circumstances since the beginning of the year.
PUBLIC SAFETY・27 DAYS AGO
Newsweek

The mother has questioned whether the soldiers would let her son live even if she did send the money.
MILITARY・27 DAYS AGO
Newsweek

The former president referenced scoring well on a cognitive test in 2018, which is designed to detect whether a person has early stages of dementia.
DELAWARE COUNTY, OH・28 DAYS AGO
Salon

Rep. Marjorie Taylor Greene (R-GA) speaks to supporters of former U.S. President Donald Trump at the Banks County Dragway on March 26, 2022 in Commerce, Georgia. This event is a part of Trump's Save America Tour around the United States. (Megan Varner/Getty Images) On Monday, CNN's Andrew Kaczynski and Em...
COMMERCE, GA・26 DAYS AGO

Blackout and crisis preparedness expert Herbert Saurugg has recently warned against the complete power grid blackout that could plunge entire Europe into darkness. He predicts a widespread blackout could be lurking in the not too distant future and such an event can cause extremely chaotic conditions worldwide. However, those who are prepared for an emergency can definitely bridge the difficult days well.
ENERGY INDUSTRY・27 DAYS AGO
97.1 FM Talk

In an interview with Russian TV, Sergei Lavrov said that Russia is essentially at war with NATO. This rhetoric has some worried that Russia may use nuclear weapons in Ukraine. Lt. Col. Dakota Wood weighed in on the likelihood of this happening.
POLITICS・26 DAYS AGO
Fox News

A superyacht worker claims the vessel’s captain once had to deploy sonic weapons against Kalashnikov-wielding pirates on inflatable boats in the Arabian Sea. The episode was one of many surreal scenes an anonymous worker detailed in a piece published Sunday in The Times of London. The captain, according to...
PUBLIC SAFETY・27 DAYS AGO
Business Insider

The former F-35 test pilot Billie Flynn told The Aviationist that moving to the "cosmic spaceship" that is the F-35 was too much to ask of MiG pilots.
AEROSPACE & DEFENSE・27 DAYS AGO