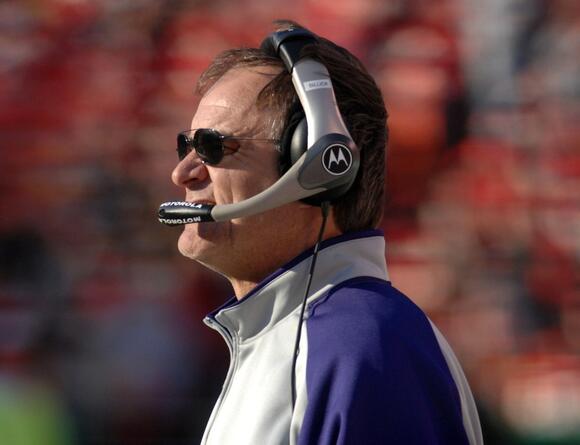 Billick, who served as the head coach of the Baltimore Ravens from 1999-2007, has a few connections with Arizona State.

Most recently, he coached ASU defensive end Tyler Johnson in the 2022 Hula Bowl.

He has prior experience with fellow special advisor Marvin Lewis, who served as Billick's defensive coordinator in Baltimore from Billick's arrival in 1999 to 2001. Lewis, who would eventually take the Cincinnati Bengals head coaching gig, met Billick twice a season as AFC North rivals from 2003 until Billick was fired following the 2007 season.

Heap was Baltimore's top rookie featured on the first ever season of Hard Knocks in 2001, a television series that follows a selected NFL team through the trials and tribulations of training camp.

Billick, doing his due diligence in teasing the shy/quiet newcomer in Heap, chose to take a small slight at Arizona State on camera.

"Todd's funny because he's got kind of that 'aww shucks, I'm just from Hooterville, Arizona' here," said Billick in a close-up to the cameras, before the show pans to Billick speaking to Heap at practice.

Surely, this isn't the first time something pop culture-relevant has taken a jab at Arizona State, which has been deemed the Harvard of the Southwest (if you're bored, here's a nice video of some times that ASU has been at the wrong end of jokes).

Props to those over at the Pac-12 Apostles Podcast for posting this video of Billick's interaction with Heap.

Perhaps at some point Billick may have to answer for his joke, although working hands-on with Arizona State just might make him have a change of heart.

Patrick Mahomes' wife, Brittany, wants all the smoke.  Brittany, who's never been afraid to speak her mind on social media, just posted a message for the Bengals.  Hint: It's not very friendly.  "Cancun on 3," she said on Twitter.  "Cancun on 3" has become a trendy phrase in the ...
CINCINNATI, OH・1 DAY AGO
Sports Illustrated

Patrick Mahomes is done hearing about all this "Burrowhead" talk.  During his postgame interview on Sunday night, Mahomes took a shot at Joe Burrow and the Bengals.  The Chiefs quarterback made it clear it's called Arrowhead Stadium.  “We showed this place is Arrowhead, it’s not ...
CINCINNATI, OH・1 DAY AGO
Yardbarker

The Pittsburgh Steelers and Philadelphia Eagles have been in the NFL since its inception. The two teams even briefly combined forces during World War II and called themselves the Steagles. The players and coaches didn’t like it then and the two fan bases don’t like each other now. Fans from the same state rarely get along and the vitriol was on display after the Eagles made their second Super Bowl in five seasons.
PHILADELPHIA, PA・1 DAY AGO
Larry Brown Sports

The Denver Broncos wanted to make a splash when hiring their next head coach, and they have done just that. Sean Payton has reached an agreement to become the head coach of the Broncos, according to multiple reports. The Broncos have agreed to a compensation package with the New Orleans Saints, who previously held Payton’s... The post Sean Payton lands head coach job appeared first on Larry Brown Sports.
DENVER, CO・5 HOURS AGO
Sports Illustrated

With tears in his eyes, the Cincinnati defensive end addressed what he was thinking on the play.
CINCINNATI, OH・1 DAY AGO
Sports Illustrated

The league admitted fault on a no-call late in Saturday’s game between the Lakers and Celtics.
BOSTON, MA・1 DAY AGO
Sports Illustrated

Once again, the Dallas Cowboys failed to make a deep playoff run as they fell short losing to the San Francisco 49ers 19-12 last Sunday in the divisional round of the playoffs. The elite offense of the Dallas Cowboys sputtered and struggled, which lead to Jerry Jones and head coach Mike McCarthy to make a tough decision.
DALLAS, TX・1 DAY AGO
Sports Illustrated

The hiring comes after Denver fired Nathaniel Hackett after 15 games in his first season.
DENVER, CO・5 HOURS AGO
Sports Illustrated

The three-time NFL Defensive Player of the Year weighed in on his former team’s new head coach.
HOUSTON, TX・1 HOUR AGO
Sports Illustrated

This men’s season hasn’t been defined by the usual bluebloods. Plus, notes on the bubble, the Big 12’s dominance and more.
TENNESSEE STATE・1 DAY AGO
Sports Illustrated

Denver does not have a long-term solution at quarterback, has traded away future draft capital and may have expensive decisions ahead. That sounds a lot like New Orleans.
DENVER, CO・3 HOURS AGO
Sports Illustrated

She didn’t wait to tease Cincinnati fans with a cold-blooded message.
CINCINNATI, OH・1 DAY AGO