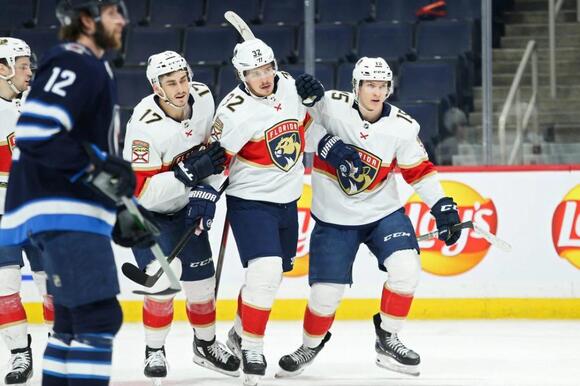 Mason Marchment scored twice and added an assist, Carter Verhaeghe netted the go-ahead goal in the second period and the visiting Florida Panthers registered a 5-3 victory over the Winnipeg Jets on Tuesday night.

The Panthers also got a goal and an assist from Anton Lundell plus Sam Bennett’s career-high-tying 18th goal. Sam Reinhart and Aaron Ekblad each recorded two assists.

Panthers goalie Sergei Bobrovsky made 32 saves, improving his record to 21-4-3.

Goalie Connor Hellebuyck made 27 saves as the Jets fell to 0-3-2 in their past five games.

Hellebuyck had trouble with Florida’s third line of Marchment, Lundell and Reinhart. That trio was on the ice together for less than four minutes in the first period, yet it accumulated all seven points, put up six shots and scored all three Panthers goals in the frame.

Winnipeg answered twice, leaving Florida with a 3-2 lead after the first period.

The action started with Marchment’s deflection off a Lundell assist at 2:09. Winnipeg tied it on Stastny’s rebound of a Brenden Dillon shot at 8:19.

Florida went up 2-1 on Reinhart’s no-look backhand pass from the corner to Marchment in the slot at 12:07. Connor scored 51 seconds later on a cross-ice pass from Perfetti. Connor, on the rush, finished after a backhand deke.

The final goal of the period went in off Lundell’s leg, with Marchment getting the primary assist at 17:33.

Winnipeg started the second period by tying the score 3-3 on Dubois’ power-play goal from the slot at 3:30. Pefetti set up the goal by skating around Panthers defenseman Radko Gudas.

Florida took its fourth and final lead on Verhaeghe’s tap-in rebound with 9:42 gone in the second. That goal was set up by Ekblad’s heavy shot from the point.

With 7:50 left in the third, Bennett made it 5-3 with his rebound following an Anthony Duclair shot.

It is only Game 2 of their Eastern Conference series, but the Florida Panthers are well aware the direction this
TAMPA, FL・18 HOURS AGO
Sportsnaut

Tampa Bay Lightning forward Brayden Point has been ruled out for Game 2 of the Eastern Conference semifinal series against
TAMPA, FL・20 HOURS AGO
Sportsnaut

Hurricanes tie it late, beat Rangers in OT in Game 1

Ian Cole scored 3:12 into overtime to lift the Carolina Hurricanes to a 2-1 win against the New York Rangers
RALEIGH, NC・12 HOURS AGO
Sportsnaut

The Miami Heat on Wednesday listed guard Kyle Lowry as out for Thursday’s Game 2 of the Eastern Conference finals
MIAMI, FL・16 HOURS AGO
Sportsnaut

Jimmy Butler scored 17 of his 41 points in an epic third-quarter uprising to help the host Miami Heat rally
BOSTON, MA・1 DAY AGO
Sportsnaut