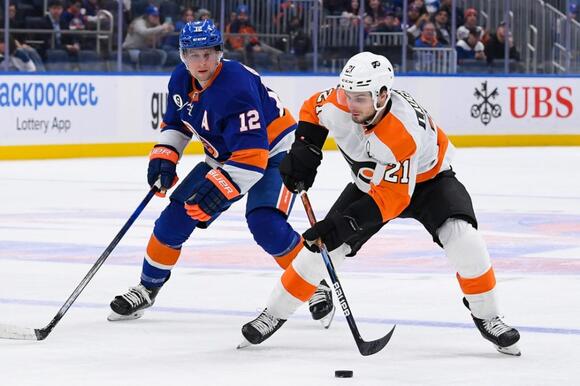 Zach Parise scored the tiebreaking goal with 8:09 left in the third period Tuesday for the New York Islanders, who spoiled Keith Yandle’s historic night and extended the Philadelphia Flyers’ winless streak to a franchise-record 13 games with a 4-3 win in Elmont, N.Y.

Noah Dobson, Anders Lee and Mathew Barzal also scored for the Islanders, who overcame an early 2-0 deficit to win for the fourth time in five games (4-1-0) and improve to 10-4-1 since Dec. 7, when they snapped an 11-game losing streak. Goalie Ilya Sorokin made 14 saves.

Claude Giroux, Justin Braun and Gerry Mayhew scored for the Flyers, who have lost 13 straight (0-10-3). The previous longest winless streak for Philadelphia was a 12-game skid — consisting of eight losses and four ties — from Feb. 24-March 16, 1999.

Yandle provided one of the season highlights for the Flyers by breaking the NHL’s ironman record — previously held by Doug Jarvis — when he appeared in his 965th consecutive game. Yandle started for Philadelphia and a cheer rose immediately after the faceoff.

He was honored at the first TV timeout of the period, when players on the ice tapped their sticks and those on both benches applauded. Yandle skated briefly on to the ice and raised his stick to the crowd.

The Flyers wasted little time taking the lead after Yandle’s record-setting shift. Giroux won an extended battle for the puck with Adam Pelech in the corner behind the Islanders’ net and fired a shot at the goal line that trickled under Sorokin just 57 seconds after the opening faceoff.

Braun’s shot from the blue line glanced off the skate of New York’s Andy Greene and fluttered past Sorokin at 12:48 of the first period before the Islanders scored twice in a span of less than five minutes. Dobson’s shot sailed past a screened Jones at 13:37 of the first before Lee scored at 18:15.

Barzal scored a power0play goal at 5:42 of the second before Mayhew gloved the carom of a shot by Scott Laughton and scored 90 seconds into the third.

Anthony Beauvillier took a drop pass by Brock Nelson and dished to Parise for the game-winner.

Tampa Bay Lightning forward Brayden Point has been ruled out for Game 2 of the Eastern Conference semifinal series against
TAMPA, FL・5 HOURS AGO
Sportsnaut

Blues not panicking going into Game 2 vs. Avs

A layoff of eight days didn’t seem to bother the Colorado Avalanche in Game 1 of their Western Conference semifinal
SAINT LOUIS, MO・4 HOURS AGO
Sportsnaut

It is only Game 2 of their Eastern Conference series, but the Florida Panthers are well aware the direction this
TAMPA, FL・4 HOURS AGO
Sportsnaut

The Miami Heat on Wednesday listed guard Kyle Lowry as out for Thursday’s Game 2 of the Eastern Conference finals
MIAMI, FL・2 HOURS AGO
Sportsnaut