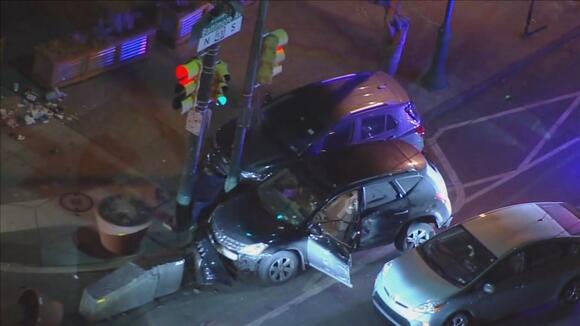 A Philadelphia police officer was hospitalized after he was dragged for five blocks while inside a vehicle following a traffic stop on Tuesday night. It happened around 9:15 p.m. at 53rd Street and Baltimore Avenue in West Philadelphia. You could hear the panic in the police radio call. "My partner's trapped inside the vehicle!" said one officer. Police say a Nissan Murano being driven by 25-year-old Amir Dickerson had an expired temporary tag and its brake lights were out. 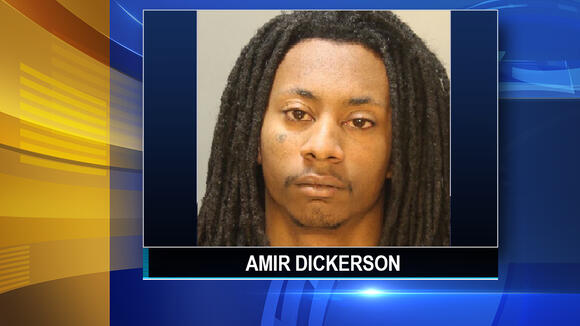 The officer told Dickerson to turn his vehicle off and he complied. But when officers were questioning him, they realized it appeared he had a gun in a sweatshirt pocket. Police say when officers asked about the gun, Dickerson immediately reached for the gun and the officers reached for his arm.

Chopper 6 video: A Philadelphia police officer was hospitalized after being dragged inside a vehicle while trying to arrest a suspect on Jan. 25, 2022.

Police say Dickerson then turned the SUV back on and took off while a 30-year-old 18th district male officer was still partially inside. The officer's legs were reportedly hanging out the driver's side door. "The male was reaching for the gun. Even though the police officer was telling him to just show his hands, don't reach for what appeared to be the gun, and he reached for the gun very quickly. The officer reached into the car to get control of the gun. That's when the male restarted the vehicle and took off at such a high rate of speed, it dragged the police officer," Philadelphia Police Chief Inspector Scott Small said. The officer was dragged for about five blocks, more than a half a mile, before Dickerson collided with multiple parked cars and a large slab of concrete at 48th Street and Baltimore Avenue, police said. "Just basically saw a ton of cop cars pull up," said resident Mike Iannocone of West Philadelphia. "It went at such a high rate of speed, the police officer more than likely had to hold on for his life rather than fall out of the vehicle where he could've been run over or killed or hurt really, really bad," Small said. The impact of the crash deployed the vehicle's airbags. The officer was taken to an area hospital to be evaluated for non-life-threatening injuries. Dickerson was taken into police custody. He was also evaluated at a local hospital and has since been released. Dickerson has been charged with Aggravated Assault, VUFA, Resisting Arrest, Fleeing Police, and other offenses. No other injuries were reported.

They should at least teach their kids that if they are going to break the law, just accept it and don't run or resist. More time spent fighting = more time spent in prison

Why don’t these kids understand that a criminal life will always lead to jail. Don’t their parents teach them that? How about a history class in what happens to criminals.

that poor officer, they risk their lives everyday and they get bashed by people for shooting suspects. let them do their jobs and protect us as well as themselves. they don't get paid enough for what they go through

Three teens were shot just as school was letting out in the 3900 block of North 17th Street in Tioga-Nicetown.
PHILADELPHIA, PA・1 HOUR AGO
6abc Action News

During the altercation, the victim was punched, sprayed in the face with mace, and had her phone stolen, SEPTA said.
PHILADELPHIA, PA・16 HOURS AGO
6abc Action News

Four men were stabbed inside a park in the city's Tioga-Nicetown neighborhood, according to police.
PHILADELPHIA, PA・13 HOURS AGO

According to officials, a maintenance worker was stabbed twice inside a bathroom at 30th Street Station in Center City.
PHILADELPHIA, PA・40 MINUTES AGO
6abc Action News

5 people in car, including children, injured in collision with SEPTA bus

A young man's mission to get his girlfriend home safely was cut short when gunfire rang out in a West Philadelphia neighborhood.
PHILADELPHIA, PA・1 DAY AGO
6abc Action News

Gun Violence Solutions: Who are the victims?

Not all Philadelphians deal with gun violence on a daily basis.
PHILADELPHIA, PA・29 MINUTES AGO

Officials announce the arrest of a man after allegedly firing a gunshot at police officers in Norristown, Montgomery County.
NORRISTOWN, PA・1 DAY AGO
6abc Action News

Police in Chester are looking for Jabril Ali, who is wanted in the attempted murder of a tow truck driver who was ambushed while on the job.
CHESTER, PA・2 DAYS AGO
6abc Action News

In one robbery, the suspects got away with a watch worth $30,000.
PHILADELPHIA, PA・2 DAYS AGO
6abc Action News

Kathleen Kane was sentenced Monday to two months to a year of jail on the probation violation.
MONTGOMERY COUNTY, PA・1 HOUR AGO
6abc Action News

Witnesses told police the gunman was pacing the last car of the train, "and without provocation, pulled out a gun and fired it at the victim at close range," NYPD Chief of Department Kenneth Corey told reporters.
NEW YORK CITY, NY・4 HOURS AGO
6abc Action News

Two children and a dog were among those rescued.
BETHLEHEM, PA・10 HOURS AGO
6abc Action News

Authorities say someone on the scene displayed a firearm and there was a struggle. Soon after, at least one shot was fired.
CHESTER COUNTY, PA・3 DAYS AGO
6abc Action News

Police say she had been riding northbound in the southbound lane of State Road with dirt bikes and other quads.
PHILADELPHIA, PA・3 DAYS AGO
6abc Action News

SEPTA police are asking for the public's help in identifying a suspect wanted for indecent assault inside a Center City Philadelphia station.
PHILADELPHIA, PA・3 DAYS AGO
6abc Action News

Philadelphia police are investigating a shooting that left a 16-year-old injured in Cobbs Creek Friday afternoon.
PHILADELPHIA, PA・3 DAYS AGO