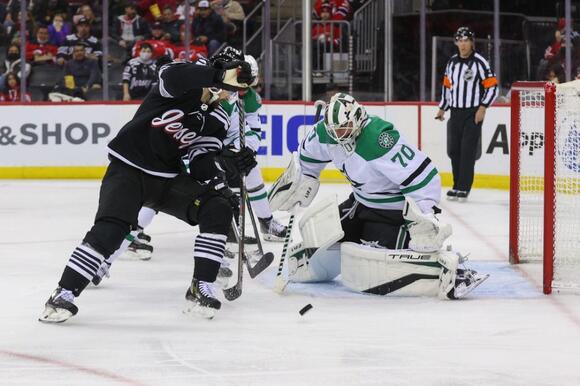 The Stars, playing the second half of back-to-back games, scored in the opening seconds of both the first and second periods.

Roope Hintz had a goal and an assist for the Stars. Braden Holtby made 36 saves and improved to 18-4-3 against New Jersey in his career.

Jesper Bratt scored his fourth goal in three games for the Devils, who have lost five of six. Akira Schmid allowed three goals on seven shots and was lifted after the first period. Jon Gillies made 23 saves over the final two periods.

Pavelski gave the Stars a 1-0 lead 14 seconds after the opening faceoff when he scored on a one-timer from the slot off a pass from Jason Robertson.

The lead was 2-0 after Alexander Radulov got to a loose puck behind the Devils’ net and passed in front to Jacob Peterson for a goal at 9:45.

Pavelski made it 3-0 when he deflected Miro Heiskanen’s wrist shot from the point past Schmid at 16:48 for his 19th goal of the season and third in two games.

The Stars struck again 15 seconds into the second period when Hintz took a drop pass from Pavelski on the rush and scored on a wrist shot through a screen from the right circle to make it 4-0.

Bratt took a pass from Jack Hughes on the rush and scored a power-play goal from the left circle to pull the Devils within 4-1 at 12:16.

Holtby made a sprawling pad save to rob Janne Kuokkanen on a rebound attempt midway through the third period.

Jani Hakanpaa made it 5-1 when his clearing attempt found the empty net at 17:35. Pavelski was credited with the assist and now has 13 points (four goals, nine assists) in a six-game point streak.

The NHL season officially started back on October 12. In this article, we track all the NHL games today as
MLS・7 HOURS AGO
Sportsnaut

Flames stare down elimination in G5 vs. Oilers

The challenge to the Calgary Flames is extremely simple heading into Thursday’s home clash with the Edmonton Oilers: Win or
NHL・20 HOURS AGO
Sportsnaut