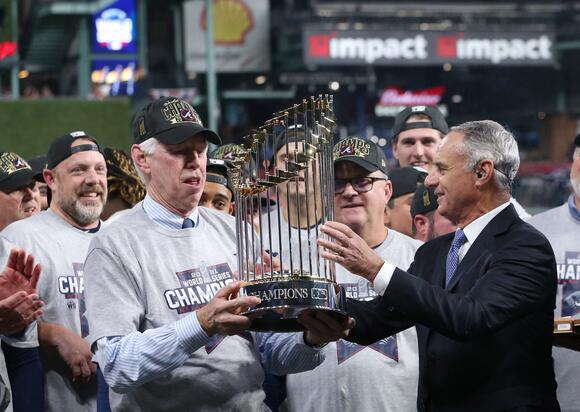 Major League Baseball has gone dark since the Atlanta Braves were crowned World Series champions. The owners and the players association went in to their respective corners and sat with their legs crossed and their arms folded.

Fast forward to where we are right now, and it seems like they are at least engaging in conversation. It all boils down to who wants to have a bigger piece of the pie, and whether or not both sides can come closer to a deal.

Jon Heyman, of Audacy sports, joined the Jon Chuckery show to shed some light on where they currently stand in negotiations. “The major issue is about the money,” Heyman said.

Here in Atlanta, there are plenty eyes on these conversations because Freddie Freeman is a free agent, and there is a need to know if he has played his last game in a Braves uniform.

Are the Hawks finally a free agency destination?

The Atlanta Hawks will hope to add some punch to their line up through free agency this summer, but will any big name free agents buy what the Hawks will be selling?
ATLANTA, GA・22 HOURS AGO
92.9 The Game

Braves' relief pitchers among the best in the league

The Braves have struggled to start the season, but the relief pitching has been incredible and if the rest of the team can round in to form, those championship aspirations become more tangible.
ATLANTA, GA・18 HOURS AGO
92.9 The Game

Did the Braves call Ronald Acuña Jr. up too soon?

John and Hugh discuss if the Braves calling Ronald Acuña Jr. up from the minors ahead of the originally announced timeline led to his groin injury.
ATLANTA, GA・6 HOURS AGO
92.9 The Game

Should the Hawks “kick the tires” on Ben Simmons?

The Atlanta Hawks will be actively looking to add star caliber players to the roster, but will Ben Simmons be an option they should consider with the latest news on his bad back.
ATLANTA, GA・4 DAYS AGO

'It's more fun to play defense, you get to hit people' says Falcons LB Troy Andersen

Atlanta Falcons second round pick Troy Andersen joined Dukes & Bell after his first NFL practice and why he likes playing defense instead of offense where he started out playing during his college career.
ATLANTA, GA・2 DAYS AGO
92.9 The Game

Trae needs another Batman, not a Robin

Nick Kayal discussed the looming offseason for the Atlanta Hawks and why the team needs to go get another superstar, not just a guy that plays off of Trae Young
ATLANTA, GA・2 DAYS AGO
92.9 The Game

Multiple ties could cost United down the line

It has become a trend for United to dominate and outplay their opponents without actually securing wins and settling for a draw. That habit could cost them down the line.
ATLANTA, GA・19 HOURS AGO
WSB Channel 2 Atlanta

Ric ‘The Nature Boy’ Flair to wrestle one last time

Ric “The Nature Boy” Flair will be coming out of retirement for one night only. Flair will appear in one last match scheduled for July 31, multiple media outlets are reporting. He confirmed the news on Twitter. The event will be held at the Nashville Fairgrounds on an...
NASHVILLE, TN・26 MINUTES AGO

Coaches loving what they see from Justin Shaffer after first practice

Sixth-round pick Justin Shaffer joined the Dukes & Bell show to discuss his time at UGA, playing with his cousin in the NFL, and how his first official practice went.
ATLANTA, GA・2 DAYS AGO
WPXI Pittsburgh

PITTSBURGH — The first-round elimination games between the Pittsburgh Penguins and New York Rangers and Dallas Stars and Calgary Flames went to overtime. It marked just the second time in league history multiple Game 7s needed extra time on the same day. The Rangers beat the Penguins 4-3 on...
PITTSBURGH, PA・21 MINUTES AGO